What a crazy last few days in the CFL as some big name players are switching teams. We haven’t seen an in-season couple of days this wacky since… well I don’t really remember.

That’s exactly what the Montreal Alouettes think Johnny Manziel will be, potentially as soon as this week. Manziel, along with O-Linemen Tony Washington and Landon Rice were shipped from Hamilton to Montreal in exchange for Defensive End Jamaal Westerman, Wide Receiver Chris Williams and first round draft picks in 2020 and 2021. A VERY steep price to pay for a guy that is looking to head back to the NFL after this season, but I don’t hate this trade for either team.

Montreal gets what they think is going to turn around their team (who knows, maybe Manziel likes it in Montreal… it’s a wonderful city after all) and some much needed help on their O-Line, but they gave up a ton in return. Williams and Westerman and good, solid vets that will no doubt help Hamilton, but the big losses are the draft picks. Likely first overall draft picks. While Montreal does have good, young Canadian talent, you can never have too much of that and now they don’t have a first round pick until 2022 (2019’s pick was used in the Supplemental Draft for OL Tyler Johnstone). It’s a desparation move for Kavis Reed in Montreal, but I like the gusto of going out and getting the best available QB out there.

From Hamilton’s side, they had a ton of draft picks in this year’s draft and now add (likely) high draft picks in 2020 and 2021. That alone is a great deal for a player who has never taken a regular season snap in the CFL. Eric Tillman loves moving QBs, so this deal was really just a matter of time.

Late Monday evening we learned from 3 Down Nation’s Justin Dunk that Toronto Argonauts Defensive End Shawn Lemon was being traded to the BC Lions for a neg list player. Toronto is packing it in here. At 1-4, even early in the season, this is a salary dump move and it’s a look towards the future. Without Ricky Ray, they simply don’t have what it takes to compete with Hamilton and Ottawa in the East Division. Lemon now goes to his 7th CFL team… watch out Kevin Glenn, you’re record doesn’t look so special now.

The Lions get to add to their Vitamin C defense and now they have an Orange and a Lemon. Good pickup, pairing Lemon with Odell Willis gives them good bookends. I just wonder where Greg Peach is at… I’d love to see him out in BC to get a trifecta of fruit on the D-Line…

6th Place in the 6ix

Speaking of Lemon out of Toronto, will anyone notice? Only 10,000 people at their last game… I know they won’t do it, but it’s time the league takes a serious look at the Argos in Toronto. I’m not a fan of folding a team or relocation, but you can’t tell me that Halifax can’t beat that attendance.

I know the Argos have to basically build from scratch again, but the Leafs just signed All-Star (local boy) John Tavares, the Jays are always a draw, the Raptors just had their best regular season and have a legit shot at getting blown out by Golden State in the NBA Finals, TFC is on fire (wait… they start fires) as defending MLS Champions and even the Marlies are defending Calder Cup Champions in the AHL. Tradition be damned, there is barely room in the Toronto sports shed for the Argos… hell, they have to fight with the lawnmower for a spot in there. Simply put, people just don’t care anymore and it’s time to actually do something about it. It’s becoming an embarrassment.

(Not so) Bold Prediction of the Week

The Riders will end the Stamps 5 game winning streak this Saturday night at Mosaic Stadium. Why? Call it a gut feeling. All I know is that Bo Levi Mitchell is winless when he plays Duron Carter the Defensive Back.

Seriously though, this is going to be the game of the week. The top 2 defenses in the league will get to show their stuff and I expect a lower scoring, defensive slugfest this weekend. I can’t wait to watch former teammates Charleston Hughes and Derek Dennis line up against each other this week. That’s going to be a lot of fun.

Plus Rider fans absolutely HATE Bo Levi Mitchell… the 13th man shows up and it’s just enough to will them to a 19-17 victory.

** Don’t forget to register for the 2nd Annual Piffles Bowl! We are raising money for Hope’s Home in Regina by having touch football games at Mosaic Stadium on Friday, August 10th and will then be having silent auctions and raffles at Mr. Mike’s in the Grasslands following! Plenty of great prizes, including a signed Riders football, a signed Duron Carter print and much more! If that’s not enough to bring you out, the event is Co-Hosted by our friend and one of the leaders of the Saskatchewan Roughriders, Jovon Johnson! And you know if he shows up, he’ll bring some teammates as well! Come on out for a fun time and let’s raise money for a great charity! Email pifflesbowl@gmail.com or send us a message on Twitter (@pifflespod) or on Facebook if you are interested or have any questions! 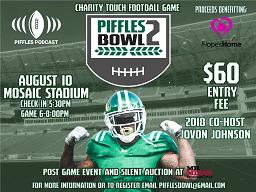