We can finally stop speculating, it’s for real now. Johnny Manziel has signed a 2 year contract with the Hamilton Tiger-Cats. Think of him what you will, but there is absolutely no denying that the amount of eyes he will bring to the league will be anything but a good thing. Us hardcore fans will be watching games as per usual, but the casual fans will tune in to Ticat games now to get a glimpse (even though he likely won’t be the starter anytime soon). Within minutes of the official signing on Saturday morning, the Ticats store had #2 Manziel jerseys already done up and ready for sale. Jerseys will sell, tickets will sell in places like Toronto, Montreal and Vancouver… this is a good thing for the league. I can’t wait to see him (hopefully play) in Regina on July 5th when Hamilton comes to town.

What a GREAT signing for the Bombers, getting former BC Lions and New Orleans Saints LB Adam Bighill. BUT, it will come at a cost, the question is who? DE Tristan Okpalaugo is the first thought, but I think it will be WR Weston Dressler. It’s not as simple as saying they are using Darian Durant’s salary savings to sign Bighill, the Bombers still have to pay Durant’s replacement on the roster AND make room for Bighill. Expect a big name from Winnipeg to be out of work pretty shortly.

And injuries already pile up. Riders Canadian receiver Jake Harty hurt his right knee in the first day of practice. That opens the door for Josh Stanford to earn a roster spot, but that’s a bad injury for a team that has questions with Canadian depth. Defensive Tackle Rakim Cox hurt his back tying his shoe…. VELCRO MY MAN!!

We have a game in less than a week! Sure it’s preseason and generally, these games suck… but I’m excited! It’s our first look at the Saskatchewan Roughriders and the Edmonton Eskimos and it’s on TV!Oh happy day, we have football to watch again! The starters won’t likely play past the first quarter, but who cares?? FOOTBALL IS BACK! We will preview that game on the next episode and of course recap the game next week! 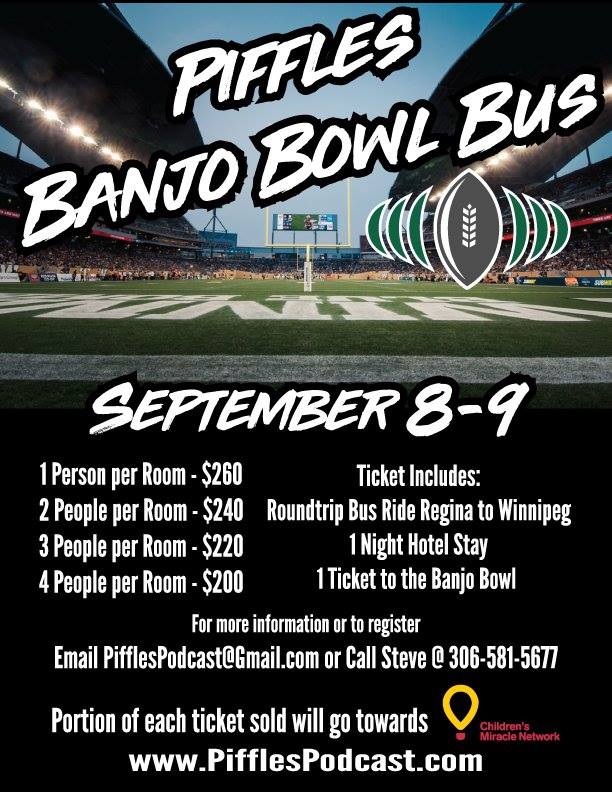