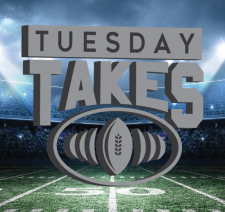 Well, 2018 has come and gone and it was another interesting year in Riderville. The 2017 season saw the Riders get to within 1 yard of going to the Grey Cup game and the anticipation of 2018 was at an all time high. The defense was ready, the offense had it’s best season in 4 years… it was our time in 2018. All we needed was some stability at Quarterback.

2018 started off with a bang. We finally got that QB… at least, we got what we had hoped was that QB when the Riders traded for Zach Collaros. Hamilton was clearly going with Jeremiah Masoli, so Chris Jones found that this was his best option to win now in 2018. Collaros would be pushed by Brandon Bridge for the starting job after Bridge looked really good in 2017.

I know hindsight is always 20/20, but damn, that sure didn’t work as planned. While the team played much better with Collaros in the lineup, the offense was bad. More interceptions that touchdowns, the defense and special teams had nearly as many scores as the entire offense did… it was sad, frustrating and honestly, a bit pathetic to watch as a fan. I could write a thesis on the 2018 Saskatchewan Roughriders offense, but instead, I’ll spare you the details and present my 2019 Saskatchewan Roughriders New Years Resolutions:

1. FIND A QUARTERBACK – Collaros wasn’t the answer and Bridge was beyond terrible and took about 8 steps backward in 2018. Neither of them should be with the team in 2019. I don’t care if it’s Mike Reilly (it won’t be), Bo Levi Mitchell (who I wish it would be) or Jonathan Jennings (who I think it will be). The 2019 starting QB for the Riders NEEDS to be a player without an extensive injury history and they need to commit to him for this year and next. It can’t be worse than in 2018, right?

2. DEVELOP A NEW OFFENSIVE SCHEME – I don’t think Stephen McAdoo was at fault for the 2018 offense… he was part of it for sure, but the talent he had just wasn’t there. Chris Jones felt that the best way to win was to control the ball, run it all the time and don’t make mistakes. For the most part, it worked… kind of. It’s not exciting to watch, but the team finished 12-6 and had a home playoff game. Screen passes and hitches will still be involved in 2019, as they should be, but they can’t be the focal point of the team anymore. Regardless of what receivers are here, they have to take chances and TRUST their players. Something that was lacking in 2018… trust.

3. GET YOUR CANADIANS INVOLVED ON OFFENSE – It didn’t matter who was out there, Devon Bailey, Joshua Stanford, Rob Bagg, Brian Jones… they were just a token spot in the offense. Jones had zero faith in them to make plays, that’s why no plays were designed for them. Jake Harty will be returning from his ACL injury in 2019 and he needs to be involved. Not necessarily a focal point, but they need him to be more than a decoy and at least have the opposition respect the player on the field.

4. CHANGE ABSOLUTELY NOTHING ON DEFENSE – The defense was the reason why the Riders did as well as they did and why we had a chance to be a Grey Cup contender. It’s clearly the strength of the team and it will need to stay that way, especially with many question marks on offense. Willie Jefferson, Charleston Hughes and Zack Evans will anchor the D-Line again and I expect no drop off there. Linebackers will have a question mark if Sam Eguavoen gets an NFL shot, but Cameron Judge is ready to be a full time MLB and the cover LB spot is more than fine with Derrick Moncreif and Matt Elam around. The secondary is in good hands and will see Ed Gainey, Nick Marshall, Loucheiz Purifoy and Crezdon Butler all return. They may have to shed some salary on D to help out on offense, but there should be absolute no worries about this team on D.

5. CREATE AN ATMOSPHERE AT MOSAIC STADIUM – Maybe I’m completely out to lunch on this, but something is just missing in the new stadium. While all the amenities and food/booze options are better (we can talk pricing later, that’s not controlled by the Riders), it just doesn’t feel like home there. The team is 11-7 there (11-9-1 if you count preseason and playoffs) in their 2 seasons. Not really much of an advantage if you ask me. It’s not as loud, people don’t seem to care as much as we used to (again, maybe I’m out to lunch on that) and it’s just lacking in the excitement side of things. As cute (not really) as your kid is doing the floss dance and the dab (that’s still a thing?), I don’t want to see that 60 times on the big screen. Show a replay and get people into the GAME more. It’s almost as if it’s become a corporate love show with a football game sprinkled in. Perhaps this is old man yelling at clouds here, but I just don’t see home games as exciting as they used to be at Taylor Field.

6. MORE DOG HALFTIME SHOWS – Let’s be real, halftimes are boring. No one cares that a youth flag football team is playing a 5 minute game (I actually enjoy these, it’s cool for the kids), the music acts are ok, but are background noise and predictable (spoiler: Jess Moskaluke will no doubt play 2 songs at Mosaic Stadium in 2019 sometime), but people stay in their seats for the dogs! Who doesn’t love wiener dog races?? This is for sure an old man yells at clouds thing, but cater to just me and the fellow doggo lovers out there. The more dogs, the better!

7. LOSE THE LAST SASKATCHEWAN PIRATE – This song sucks. It's tacky, it's dumb and it's just gotta go. It's better than the Stampeders having 'Sweet Caroline' as their fourth quarter stretch song, but the bar isn't very high there. I've been an advocate for bringing 'Shout' back and I'll stay fighting that battle, but can we just go with something different now? It's just time. Some Bruno Mars, Lady Gaga, Imagine Dragons, I don't care. JUST. NO. PIRATE.