Saturday afternoon marks the annual Labour Day Classic rematch between the Saskatchewan Roughriders and the Winnipeg Blue Bombers… the Banjo Bowl! Piffles Podcast is excited to be bringing a bus load of Rider fans out to Investors Group Field in Winnipeg to take in the game, it’s going to be a blast!

The Riders beat the Bombers last week at Mosaic Stadium 31-23 in a tightly contested game. I fully expect the same again this week. Winnipeg is a tough place to play and this is no gimme for the Riders. If they want to hold onto 2nd in the West Division, they need to bring their ‘A’ game to Winnipeg. Let’s break this game down.

Last week Andrew Harris ran wild for the Bombers, compiling 150+ yards rushing, including over 100 in the first half. Up until he got hurt, he was dominating the game and was the reason the Bombers had a lead going into the 4th quarter. Stopping Harris NEEDS to be the Riders #1 priority this week. Defensive Tackle Mic’hael Brooks will be back in the lineup after missing last week’s game, so the Riders run D gets an immediate upgrade in the middle, as that’s where Harris did plenty of damage. It’s simple, take Harris away and let Matt Nichols try to beat you. Harris is running away with the rushing lead in the CFL and is well on his way to Canadian Player of the Year. Spy a linebacker on him, plug the middle and force Nichols to be the difference maker. After a solid season last year, Nichols has shown he really is just an average QB in this league. He won’t win many games on his own, so the Riders need to capitalize on him like they did last week.

No Dressler, No Leggett

Injuries are slowing the Bombers offense down (their O stopped moving the ball once Harris got hurt last week) and having Weston Dressler out of the lineup again doesn’t help. He brings a dynamic to the team that they are sincerly missing right now… a safety valve and mid-range target for Nichols. Since going to Winnipeg, Dressler has done a lot of damage to the Riders, so having him out is a big loss to this Bombers team.

As for Leggett, it’s a loss to a defense that is still playing really well, but they could use him. LB Adam Bighill is having a GREAT 2018 campaign and really is the heart and soul of the defense. Leggett isn’t the best player on the field, but he definitely makes the Bombers better. Missing him hurts and the Riders need to try and take advantage of it.

This seems to be the mantra for the Riders offense this season. Keep it simple… don’t turn the ball over and win the time of possession. Chris Jones said to me after practice on Thursday that the other team can’t score points if they don’t have the ball. Judging by how their offense has played this season, we won’t see much different in this game than we have most of the season with QB Zach Collaros in. Collaros is 4-1 as a starter this season and you can see the playbook opening more and more for him, but it’s crutch is the short game. Gain just enough yards to keep moving the sticks, win the trenches, kill the clock. It’s not the most exciting offense you will ever see, but it’s doing the job. They are doing enough and have found ways to close games lately when they’ve needed it. Don’t turn the ball over and take the Bomber fans out of the game early. If they can do that, the game gets that much easier.

Give us Some Moore!

Riders receiver Kyran Moore is just 21 and has already shown a huge impact on the team. He brings energy and explosiveness to a team that will need it with star special teams returner Christion Jones on the 6 game injured list. Moore had an electrifying 65 yard punt return TD in the Labour Day Classic last week and he will be the main returner again this week. He’s getting in more and more with the offense too and I think he’s about to pop off. A great find by Chris Jones, this is a really dynamic young man! 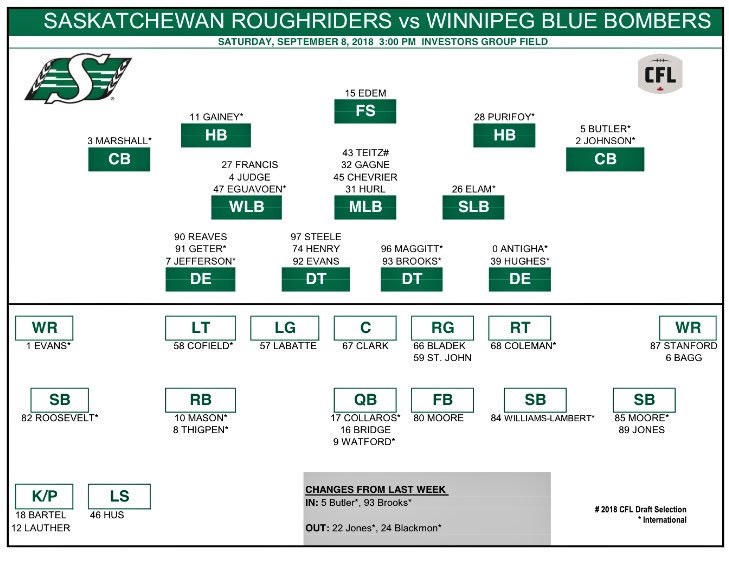 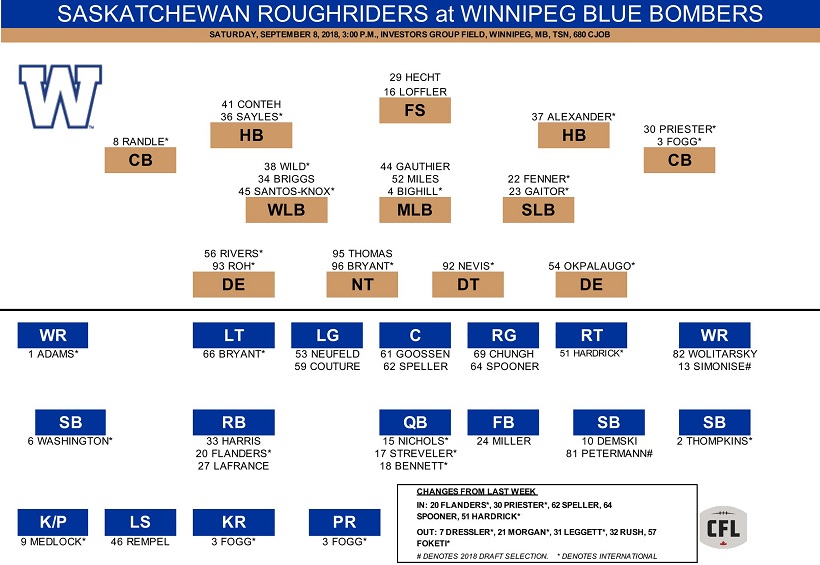 This is going to be a very hard fought game and I completely see it coming down to who has the ball last. Thanks to Brett Lauther, the Riders will continue their win streak and extend the Bombers recent futility. 29-26 Riders.