Power rankings are a common theme in sports. They exist in all leagues, across most media outlets, and fandoms. Power rankings are there to entice discussion, but often incite rage and anger when a team isn’t ranked how a fan thinks they should be. Twitter user @Krepadoodle has a cure for that with his CFL Pork Rankings.

The pork rankings began as a one off in 2015, though never released publicly, but the idea stuck in Todd’s head. I reached out to Todd to get a little background on how these came about.

“2015, I did it once. Just the one, not even sure I released it publicly. After week 2 this year, someone mentioned hating people that hate on rankings, and I mentioned the pork rankings” 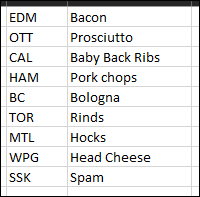 From that moment, the CFL Pork Rankings were born again. While the new version has certainly come a long way in artistic style, the premise has certainly remained the same.Todd takes your typical 9 team power rankings in the CFL, and rather then give each team a numerical value, he gives them a value based entirely on pork products. While bacon always remains at the top, because bacon, the remaining pork products change on a weekly basis. For instance, week 2 saw the Edmonton Eskimos ranked at the top as bacon, while the Toronto Argonauts take up the spam space at the bottom. Week 7 sees the Bombers at Bacon, while the Lions sit at the bottom spot, currently occupied by “wiener”.

He managed to take a contentious thing in power rankings, and term them into something hilarious.

“I have like 10 years of doing standup comedy in my background, so “fun writing” comes naturally to me these days. The whole idea of it is to take the grumpiness out of the actual position of each team”.

It certainly would be hard to take someone seriously if they tried to complain that their team was ranked at pork chop, when they believe they should most certainly be ranked at chorizo.

The rankings have certainly come a long way in quality since the original iteration in 2015 (see below).

Along with the pork rankings, Todd also does a weekly “Snout Out”, where he gives a shoutout to 5 moments from the previous week in the CFL. His most recent version earned him the Piffles CFL Tweet of the week, when he gave the Ottawa REDBLACKS ‘5 slices’ for redefining the term “Yack Yards”

If you don’t already, give Todd a follow on twitter(@Krepadoodle). His pork rankings come out on Wednesdays, while the Snout Outs come out on Mondays.

In a day where people take sports far too seriously, it’s good to see some people trying to lighten the mood. 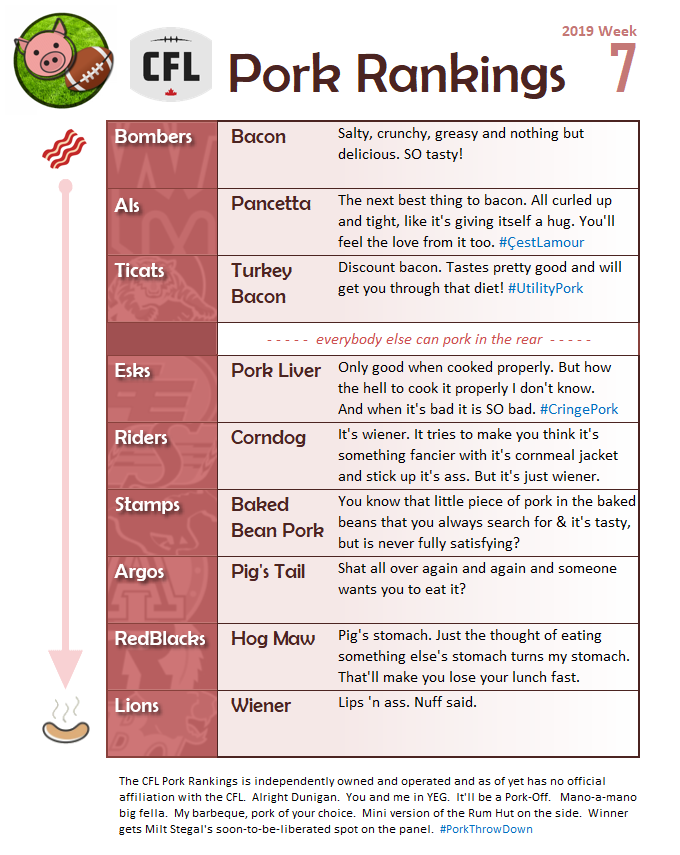 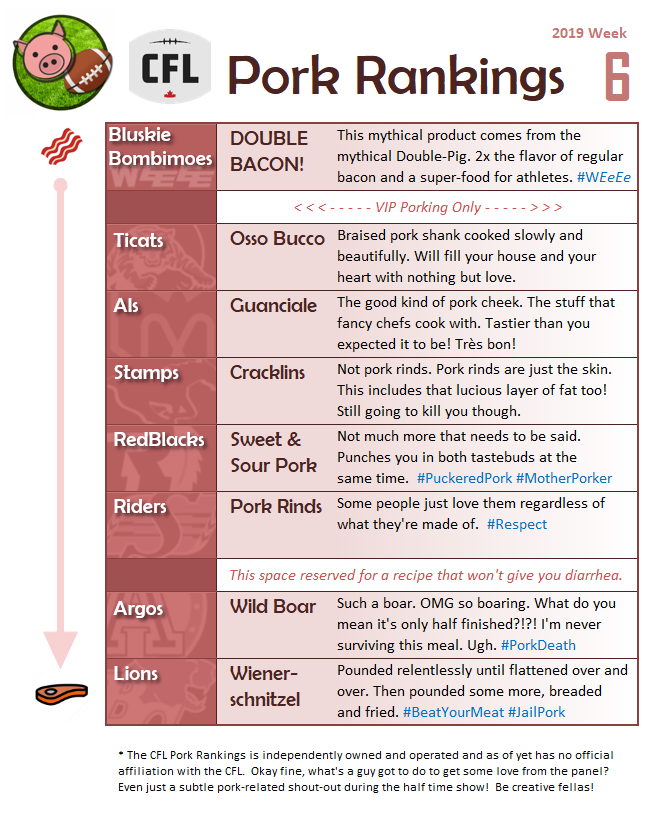