Chris Jones to the Cleveland Browns

According to @CFL_News on Twitter, Chris Jones tenure with the Saskatchewan Roughriders has come to an end. He has accepted a position in a defensive capacity with the Cleveland Browns of the NFL. Expect Jeremy O’Day to take over as GM.

This move has been confirmed by TSN’s Dave Naylor: 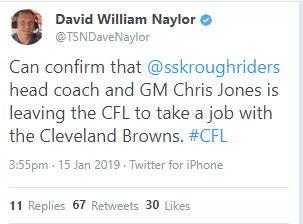