Earlier this morning, Darian Durant announced his retirement from the CFL on his website. 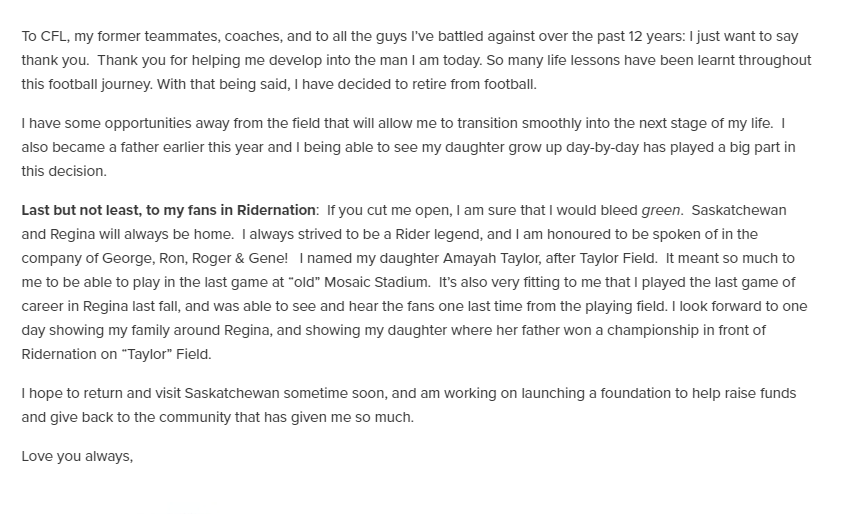 Before we get in to his career, I want to take a moment to go over his retirement letter. If it wasn’t clear to everyone that Darian Durant was a Rider, through and through, it should be now. From his comments about Saskatchewan and Regina being home, to naming his daughter after Taylor Field, to preparing to launch a foundation to raise funds for the community after his career, it should be clear to everyone that Darian Durant is, and always will be, a member of Rider Nation.

Darian Durant is one of only four quarterbacks in the team’s 100+ year history to lead the Roughriders to a title. In doing so, he became a legend. Unlike Ron Lancaster, Kent Austin, or Kerry Joseph, Darian Durant took his title one step further, winning it on home turf in what is arguably the greatest football memory for many in Rider Nation.

Over his 12-year CFL career, Darian Durant amassed over 31,000 yards, 167 touchdowns, to go along with 3100 yards rushing and another 24 touchdowns. He led the Saskatchewan Roughriders to 3 Grey Cup games, winning one in 2013.

On top of everything else he has done throughout his illustrious career with Saskatchewan (and Montreal, I guess) the one final thing we can be thankful for is…. He retired before ever playing a down for the Winnipeg Blue Bombers. Nobody wanted to see Darian Durant in Blue and Gold.

I love that he took one last dig at the Bombers in his Rider career, retiring a few weeks before CFL camp. True Rider, to the core.

Thank you, Darian, for your many years in Green and White. It won’t be long until your name is called to enter the Plaza of Honour in Regina.