Derek Dennis was vocal on Tuesday morning about his efforts to keep players from travelling to camp ahead of the May 17th CBA expiration, in a plan to get players on the same page. 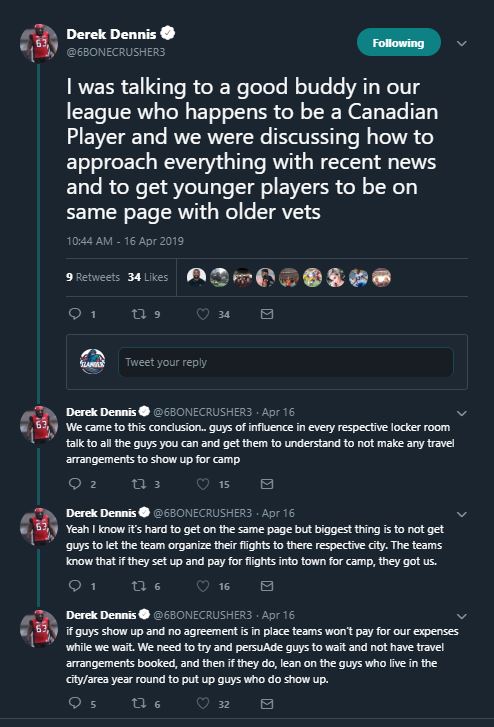 I questioned the legality of this with Derek, as I wasn’t familiar with labour laws in all provinces, but decided to do a little digging around on what is required before players would be able to strike in this manner.

Here is what we know. The CBA is set to expire on May 17th, with camp set to on on May 18th across the league. There are teams in Ontario, Quebec, Manitoba, Albert, Saskatchewan and British Columbia, and each province has their own provincial by-laws.

The first thing I noticed, upon digging in to some of the provinces laws regarding strike action is how complicated they are. It’s certainly not as simple as “collective bargaining agreement is over, lets walk off the job”. One thing that is common across all provinces, is the requirement for a strike vote prior to walking off the job. In all cases, a majority of employees need to vote in favour of a strike, and all employees need to be given a reasonable opportunity to vote. Beyond that, each province has their own laws regarding when a strike can occur.

Here are a few provinces with laws that stand out, that would likely prevent this plan from being actionable

A conciliation office must have been appointed, and a “No board” notice needs to be issues. It is legal to strike or lock out on the 17th day following the issue of the no board notice.

While it is certainly a solid attempt at a plan to bring the players together, it appears labour laws would prevent this kind of strike action out of the gate. Leads me to believe the date of the CBA expiration is no accident. Were the CBA to expire in February, for example. Players would be able to strike at the beginning of camp. Would certainly add another tool for the players to use that is currently not in their arsenal.

For the record, I am in full support of the players doing whatever is necessary to get a solid pay day. Football careers are short, and these guys put their bodies on the line week in and week out for our entertainment. They deserve to be paid and protected.

One thing is certain. With the CBA set to expire one month from today, and talks scheduled to resume next week, it’s time for both parties to get to work on getting a deal done.