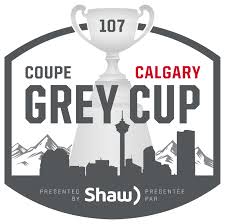 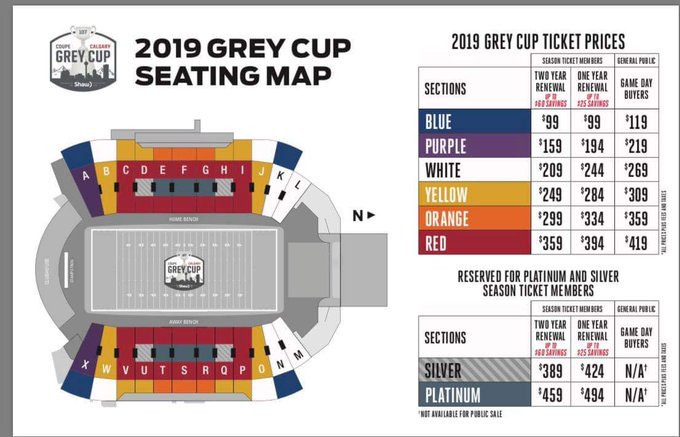 Grey Cup 107 takes place this coming November in Calgary, they have chosen the slogan “Experience the Energy” in honour of Calgary’s energy sector.

Having seen the pricing for the tickets to the game they should have picked something more like “Bring your wallet.”

For those of us non-Stampeder season ticket holders, the cheapest ticket in the whole building is $119. Don’t get me wrong for a Grey Cup ticket isn’t horrible, just try not to remember that is usually a $35 seat… and it is, in reality, a metal bleacher… and it is November…

Basically, what I am saying is bring a cushion to sit on… you are going to need it.

Also, the 4 areas highlighted for the blue ticket are the smallest areas in the entire stadium. Those tickets are going to be harder to get than a VHS copy of the Bombers last Grey Cup win.

There are 2 more “value” colours in white and purple but those are still endzone seats at the end of the day. If you want to get out of the endzone, you need to get a yellow ticket each ticket is going to cost you a minimum of $309, IN THE SECOND LEVEL.

Yes, there is yellow in the lower bowl, but it is still a glorified endzone seat.

Orange is only available midfield on the second level and will set you back $359. While the Red tickets that literally go endzone to endzone both sides are a whopping $419 each.

Safe to say you will not be seeing many families at this game.

Grey Cup 2016 in Toronto the market was misjudged, and the cheapest ticket was $169 for second-level in the endzone and the cheapest down the sideline was $299.  Tickets did not sell, and the Argos started giving tickets away with pizza value meals until the league stepped in.

It was a black eye for the league and the Grey Cup.

While the Calgary tickets aren’t as expensive it has already started a discussion on social media amongst life long fans whether going to the game is worth the steep price tag.

And that’s is primarily amongst Stampeder season ticket holders who are getting a price break and don’t have to worry about travel.

The CFL needs to be aware of the fine line between making revenue and not out pricing a market.

And with a third Grey Cup within driving distance, the Riders will have to keep a close eye on where the tickets need to be for 2020.