Grey Cup Pricing Is Still On The Rise

Ah, that time of year when Grey Cup ticket prices come out, and the CFL family gets into a tizzy about overall pricing. Now obviously, I find myself removed from social media for the time being, so I don’t know if that is happening again this year, but based on the prices released, I can only assume that people are outraged.

At 11am this morning, the Saskatchewan Roughriders announced their 2020 Grey Cup prices, and I find myself in a bit of a conundrum when it comes to the announced prices. I sit in Section 125, which happen to coincide with the cheapest seats in the entire stadium for Grey Cup 2020. After a season ticket holder discount, and taxes/fees, my ticket will be $196. For a Grey Cup game at a brand new stadium that isn’t expanding their seats by much, that is certainly reasonable.

But this isn’t about my seats. This is about the sidelines, where the gouging truly begins. As we move just 2 sections over, the corner of the end zones on the main level will run you $300. Want to sit on the sidelines, in the end zones? You’ll be writing a check for $350. Even nose bleeds in the corners start at $250 and go up from there. 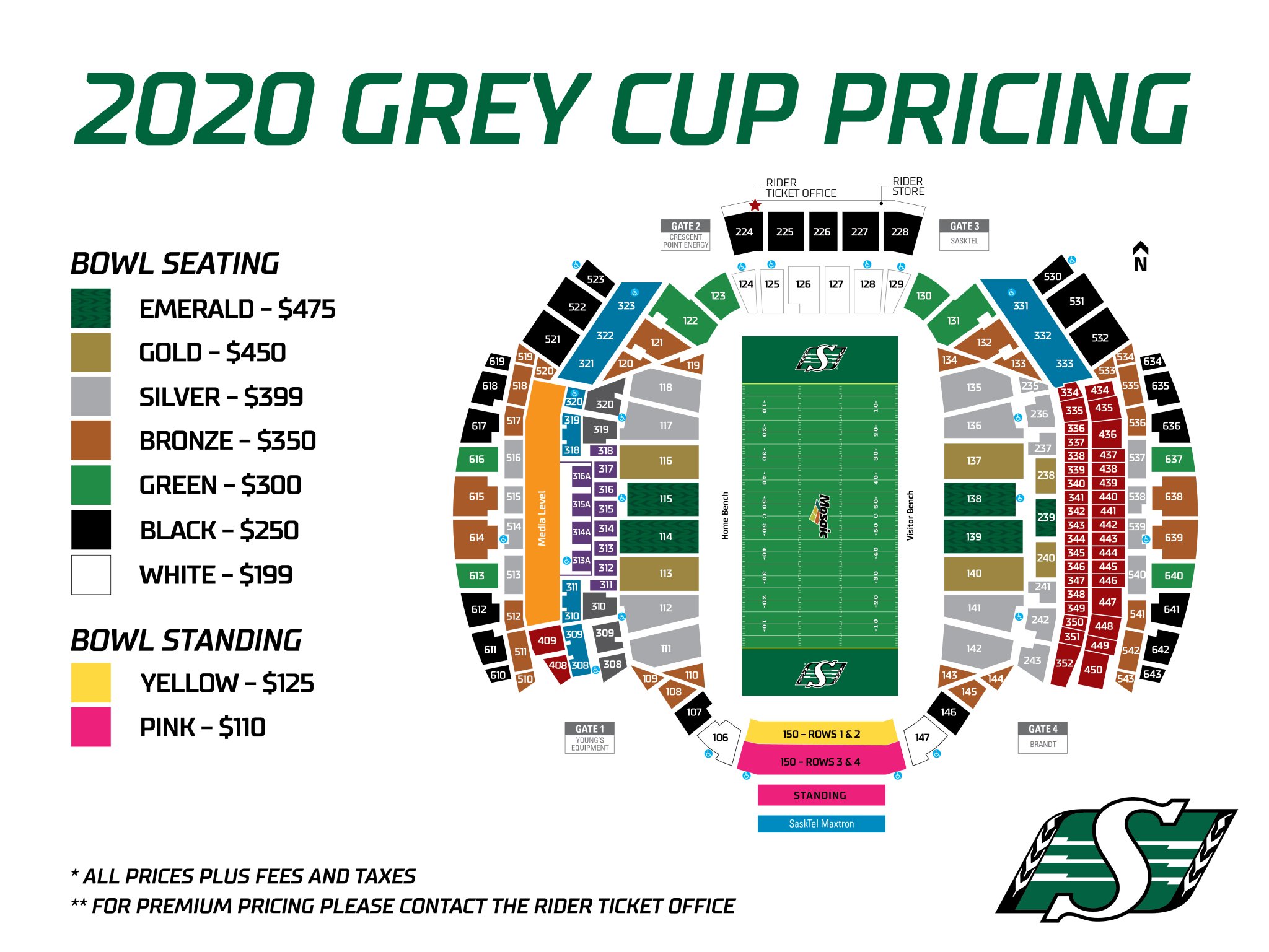 The pricing for Grey Cup seems to be on the rise over the past few seasons, causing some fans to question their intentions. When you can choose between a flight to a tropical destination, or a single football game outdoors in late November, that’s a problem.

For 2019, basically any seat in between the goal lines (high nose bleeds not included) is the same price. Those tickets start at $419 for the average person coming to Calgary this season. I complained last year that tickets at the 5-yard line should not cost me the same as tickets at the 55 yard line. The Riders appeared to listen. Unfortunately, that didn’t help the cost of tickets. 2020 will see prices START at $399 plus taxes, and rise up to as high as $475 for the prime seats. I’ve already seen several mentions of people in that emerald sections suggest they will not be picking up their Grey Cup tickets, and who can blame them? My season tickets don’t even cost as much as any of the seats along the sidelines for Grey Cup, and that gets me 11 games (well 10 + a potential home playoff game).

Add in complaint – Why have both Calgary and Saskatchewan chose not to expand their stadiums to increase ticket availability for 2019 and 2020. More available seats = lowered ticket cost across the board (usually). Seems odd that they would both decide not to go that route. Having said that, I sure as heck wouldn’t want to be stuck on metal bleachers in the end zone if the weather hits -30 as its been known to in the prairies.

We all know prices aren’t going to go down, because for the most part, people have shown a willingness to pay these prices. Which means my complaint is going to fall on deaf ears, and Hamilton 2021 will likely continue the trend of rising ticket prices, but how many families are going to miss out on the Grey Cup game because they got priced out by $400 tickets?

If this year’s halftime show is the beginning of a trend of Superstar acts for halftime, at least fans can take some semblance in knowing their money is being spent on their entertainment.

I’m just hoping this ever increasing ticket prices for the championship game won’t see the league lose touch with the “average fan” over time. At least we can thank our lucky stars that we aren’t coming anywhere close to Super Bowl level pricing.