They say the real CFL season doesn’t begin until Labour Day. Well, here we are! The unofficial end of summer is upon us and the games mean more (well, not really, they are all worth the same in the standings in Week 1 as they are now and Week 20), but this is when the crowds get bigger and louder and the atmosphere changes just a bit.

The Labour Day weekend is famous for seeing all the crazy costumes and getups from the fans, everything from the Macho Man Rider Savage to the Rider Joker to just some random guys painting their bodies green. Yes, I used to be one of those guys back in 2007… 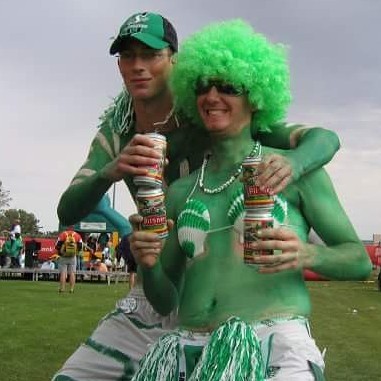 I do miss that afro…

But the Labour Day weekend is all about having fun. Fun with friends, family and fun with enemies. While we may rag on the Winnipeg Blue Bombers and their fans (and vice versa), it’s all in good fun and we love having our Manitoba friends join us in Saskatchewan every year for the long weekend. Not much is better than having the small pockets of blue in the middle of our sea of green and they are just as crazy as us. For example, they have their famous Golden Boy. 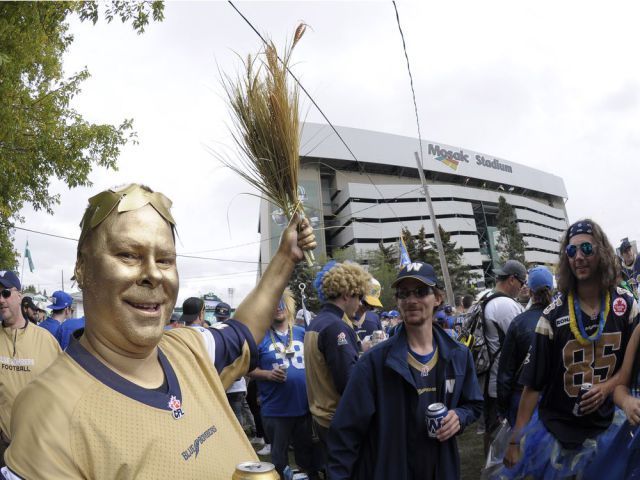 But what’s going to make this Labour Day weekend extra special is an unveiling of a new statue on Saturday afternoon outside of Mosaic Stadium. The Riders have said it will honour 2 legends (gee… I wonder who those could be??) and it has been a long time coming. I think we can all safely assume it will be a statue of the two greatest Riders of all time, Ron Lancaster and George Reed. But what will that statue look like? Will it be the classic Ronnie handing the ball off to George scene? 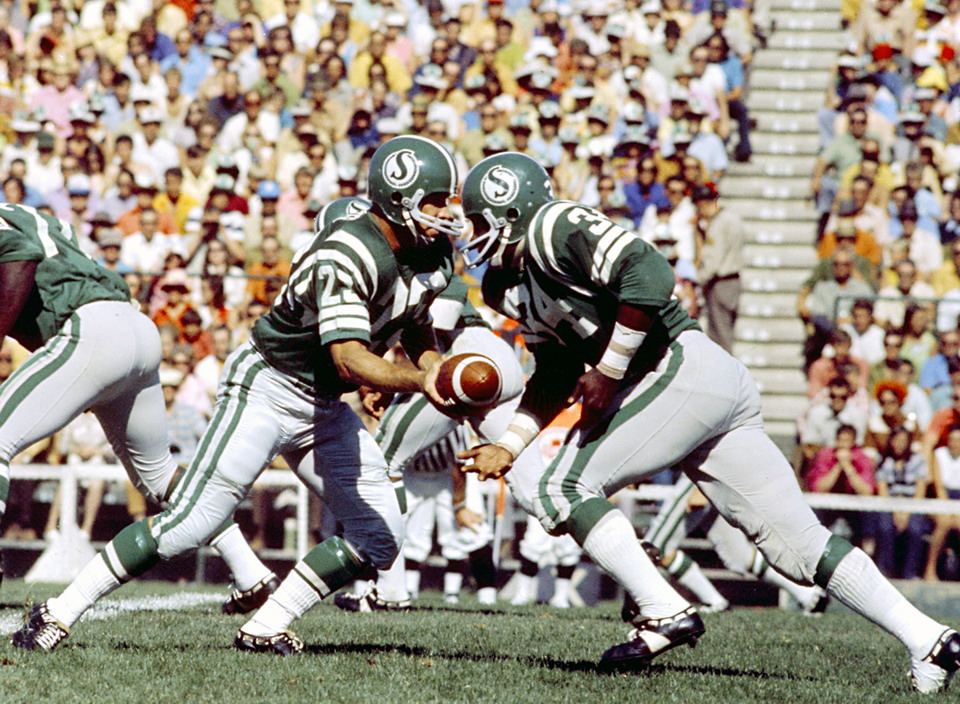 The statue unveiling will add to an already exciting weekend and that’s before we even talk about the 4-4 Riders taking on the 7-2 Blue Bombers. Any time both these teams are competitive, this game goes to another level and the atmosphere gets even better, After the Riders last 2 games, we are a pretty confident and happy bunch here in Riderville, but this will be a tough game. I fully expect a good game by both teams, possibly coming down to a final play, much like last year’s Labour Day game and this season’s Mosaic Stadium opener (I just hope that it’s not Justin Medlock making that final play this time…)

But this article isn’t about a preview of the game. We did that on Episode 53 of the Piffles Podcast this week (brought to you by Brin Werrett https://soundcloud.com/pifflespod/piffles-podcast-episode-53-nick-james have a listen, we also chat with Riders DT Nick James and Winnipeg Blue Bombers FB John Rush). This article is about the weekend atmosphere itself.

I mentioned that this weekend is about fun with family, friends and Bomber fans, but what does this weekend mean for you? What’s the best part of the weekend? Is there a Labour Day tradition you have? What’s your favourite Labour Day Classic weekend memory? For me, I go with 2007 and not just because of the way that game ended with Kerry Joseph taking a QB draw in for the winning touchdown. That day was the first time I got to meet and speak for a moment with the great George Reed. And that’s an experience that I will never forget. 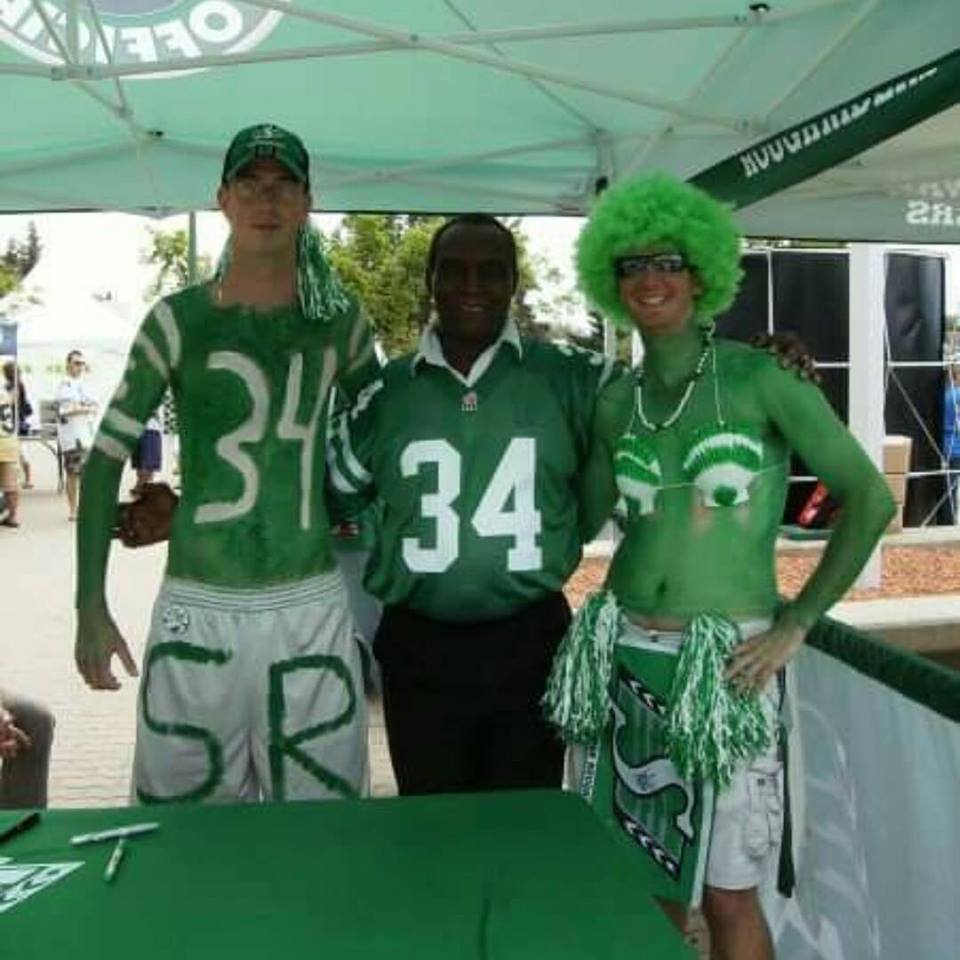 As the beer flows, the fun is had, just remember that this weekend is all about fun. Be nice to Bomber fans (it’s not their fault they were born in Manitoba) and most importantly be safe! Make sure you have a safe ride back home.

Don’t forget to bring the noise! TSN will be bringing noise meters to this game and to the Banjo Bowl in Winnipeg next week to see which stadium has the loudest fans. The Bombers currently boast that unoffical award with a banner in their stadium. What could be better than making them take that down?

If you’d like to join the Piffles Podcast Tailgate, we would love to see you this weekend! Come on out, say hi and enjoy your favourite cold beverage with some great Rider fans! https://pifflespodcast.com/tailgating

Enjoy Labour Day weekend folks. It only comes once a year! GO RIDERS!!