Hate the Celebration? You Gott it All Wrong – Alex’s Tuesday Takes

You Gott to be Kidding Me 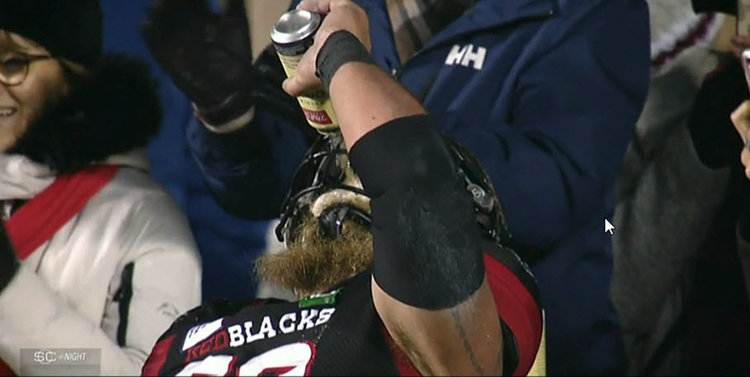 Thankfully, no penalty or fine was announced for him since the league allows props in touchdown celebrations. We knew there was going to be some backlash about this (and there was… insert Mrs. Lovejoy “won’t someone please think of the children” line here) and there was, but on Monday, the league changed their rule about using props in celebrations so that no alcohol or drug use can be done or depicted.

I don’t fault the league, they have an image to uphold and there are young eyes that watch the games. In fact, I’m surprised it took as long as it did for the league to react like this. From a business PR standpoint, they had no choice.

While players are viewed as role models, let’s be honest. They are real people. Beer and football go hand in hand… heaven forbid your child should see someone drink one. I saw people complain that their children saw what happened and that what Gott did was unacceptable. Ummm, unless you are a Bombers fan, you’ve seen your team win the Grey Cup fairly recently. Gues what they show on TV? GUYS DRINKING AND SPRAYING BOOZE ALL OVER THE LOCKER ROOM!! I highly doubt you sent a letter in to the league because that was on the screen…

Jon Gott isn’t the parent of your child, you are. It’s not up to him to talk to your child about something they see on TV and explain it out to them. It’s not the league’s fault that you don’t sit down with your children and explain what drinking a beer is. Face it, beer and football go hand in hand. I’m not saying you are to blame for anything, because you’re not. All I’m saying is use this as a learning experience for your kid. Talk to them about beer instead of immediately throwing blame on someone over something that was harmless.

Gott’s TD celebration was unique, fun and the exposure the league gained from the ESPN and other US coverage is GREAT for the league. We should all be praising Jon Gott for making the game fun again. CFL… Canadian FUN League.

I can’t wait for this weekend… but the first game will be a snorefest. Hamilton isn’t fun to watch without Brandon Banks and BC has looked like hot garbage the last couple of weeks. I don’t think either team is that good and I expect a low scoring game that drags on.

But the West Semi-Final… ohhhhh my this is going to be fun! Two very good, aggressive defenses, two teams that can run the ball and two quarterbacks that are managing games. This is going to be a heated affair (hopefully literally, it’s supposed to be minus 10 on Sunday in Regina, we will need all the help we can get).

I’ll save my predictions for later in the week on episode 101 of the Piffles Podcast, so stay tuned for that episode where we look at these two games in more detail.