In an unprecedented move, the Saskatchewan Roughriders traded Owen Two to the Hamilton Tiger-Cats for future considerations. They weren’t finished with moves as they then signed his non-union Mexican equivalent Juan N. Two to a rookie deal.

But seriously what a night at Mosaic Stadium. Everything is great in RiderNation when they put together a full game plan for a win at home. The beer was colder, the fans were greener, and the 2 foot hot dogs were hot doggier.

Let’s break this game down.

– Besides an untimely 110-yard pick-6 by the Ticats early in the game the Riders were in control the entire night. Kevin Glenn waited a bit too long to hit a wide open Nic Demski which allowed the Ticat Justin Rodgers to adjust, jump the route and run the whole length of the field.

– On the plus side, the Riders answered immediately to those turnover points and put up a touchdown of their own. The past few seasons, plays like the pick-6 would have been the start of a series of errors for the Riders, but Glenn marched the team back down the field to put the Riders back on top.

– Riders have a running game! Who would have thought that after the first 2 games? While one could argue that there could be more focus on the Running backs, Cameron Marshall was a beast eating up yards when asked to.

– Bakari Grant with his career 300th catch got his 3rd TD in 3 games. While it is early in the season it means, even more #Breakfast4Bakari and most importantly, even more #Touchdowns4Hope. 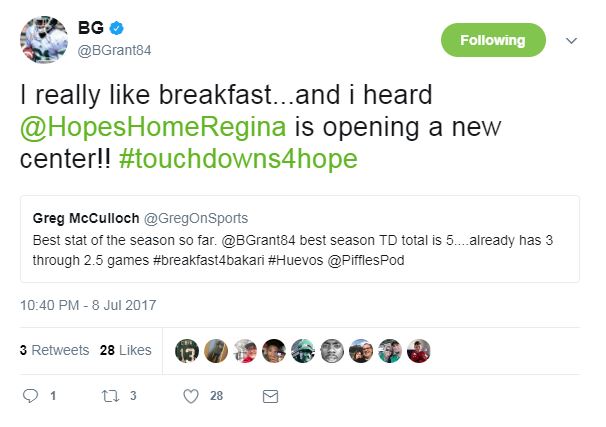 – Getting Duron Carter involved early on quick routes opened the field for Naaman Roosevelt later in the game. There has been much debate on what team has the best receivers in the CFL with Roosevelt, Carter, Grant, Demski, and even Rob Bagg it is hard to think of a better platoon of receivers in the league.

– Riders even tried some razzle-dazzle having Glenn throw a screen to Carter who then threw the ball down field to Grant who was behind the defender. Grant must not have expected Carter to have the arm he did as he slowed up a couple of steps and Carter barely overthrew him for what could have been another touchdown.

– If I had to fault the offence for anything it was they were having trouble picking up blitzes, Ticats got more clean shots on Glenn than they should have despite only 1 sack being tallied. Either the RB needs to pick up the extra man or the receivers need to catch the guy at the line of scrimmage. Other teams in the league are going to pick up on that and will send everyone they got.

– Riders Defense played lights out allowing only 206 yards combined offence. Riders must have gotten the memo as they sent plenty of pressure at Zach Collaros not allowing him to get comfortable and find receivers down field. Was this a new philosophy? Does Jones have more faith in his secondary? Or were they just destroying a really weak TiCat offense? Right now it is too early to tell.

– And on the balls, Collaros did get downfield the Riders either got their hand on the ball or were there for the immediate tackle. The secondary was much improved from the previous 2 games, but the true test for the secondary comes after the bye week versus Bo Levi Mitchell and the Calgary Stampeders.

– Special teams were overall pretty good. Kicker Tyler Crapigna was perfect on the night bouncing back from last week’s kick off the goal post. But the kick return team feel underrated, it just feels like the Riders are on the cusp of taking one back soon.

– Josh Bartel might be the best directional punter in the league, he may not have a booming leg that will force returners to run back but he can place the ball like no one else in the league. The short punt at the end of the first half with less than a minute to go had people scratching their heads. In the Ticats zone with barely any time left, kicking at a guy that wasn’t prepared to catch the ball could have lead to a turnover that would have allowed the Riders to tack on more points before the half. Even though the Ticats got the ball back they were still deep in their zone with 30 seconds left and it was no different result than a coffin corner. Unconventional yes, but it was a low-risk, high reward if it paid off.

– Riders go into the bye week on a high, hopefully, the momentum can be harnessed and carried into Calgary in 2 weeks, as the Stampeders are going to show what kind of team the Riders truly are. But for now the colours are a little brighter in RiderNation and we can hold onto that feeling for 2 weeks.

Be sure to check out this week’s Piffles Podcast for a complete breakdown of the game from Alex, Ferlin, Steve, and Amy.