Is It Time To Replace Bring Em Out?

Yesterday, Riders star WR Duron Carter (@DC_Chillin_8) tweeted out the following, suggesting that the Riders Bring Em Out entrance was past it’s best before date. 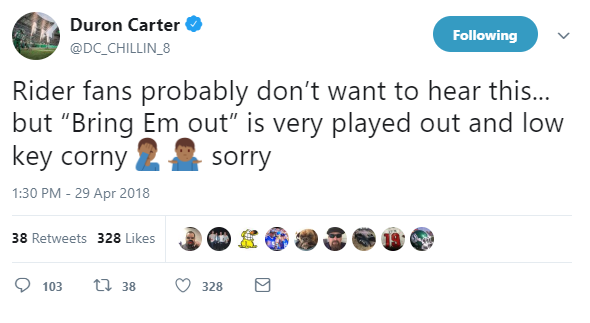 It got me thinking…What if he is right? Is it time to replace the Riders Bring Em Out entrance with something new?

The Riders have been coming out to the TI – Bring Em Out mashup for the better part of a decade, and it has become a regular part of the gameday routine. It has become a part of the Riders marketing throughout the years, and does a solid job of getting the stadium amped up for the impending Riders entrance. Having said that, I think it’s time for a change.

The entrance was substantially better when the team used the giant inflatable Rider helmet. It felt like the fans were actually “Bringing Them Out”. For big games like playoff games, labour day, etc when it seemed the players were especially amped up, you could see them banging on the mask on that inflatable helmet, as if they were caged animals waiting to be unleashed.

To me, with the Riders just standing in the tunnel, there isn’t that same feeling. Something is missing with the experience. I agree with Duron – it’s time for a change. But like most others, I can’t think of a solid replacement. Bring Em Out has been so engrained on Rider Fans hearts that it’s hard to picture another entrance song, but with a new stadium should have come new traditions.

Speaking of change and new traditions – While we are at it, could we get rid of The Last Saskatchewan Pirate as the song for the 4th quarter stretch? You want to talk about a song that is, as Duron put it, very played out and low key corny, it’s that song. While it certainly serves the purpose of getting people moving, so would a plethora of other songs that haven’t been used for what feels like an eternity. Why not Shout or Jump Around, or literally any other song that gets people moving.

If you were the DJ/Marketing guy, what song/mash-up would you put in place of those 2 songs?