Jaime Elizondo resigns as OC of the REDBLACKS

As reported by Justin Dunk of 3 Down Nation, Jaime Elizondo has resigned as Offensive Coordinator of the Ottawa REDBLACKS. 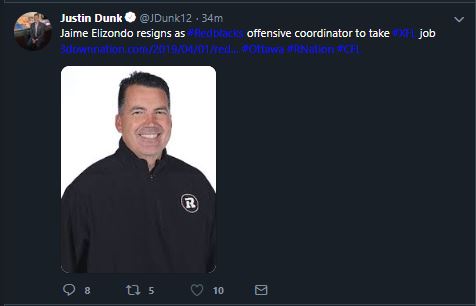 This news has been confirmed by the CFL and the Ottawa REDBLACKS.

Earlier this offseason, the Saskatchewan Roughriders reached out to the REDBLACKS to interview Elizondo for their Head Coaching position, but the request was declined. One must wonder if the team holding him back from a head coaching opportunity is what led to his resignation. He will be joining the Tampa Bay XFL team when their league begins in 2020.