After a whirlwind trip at CFL Week in Winnipeg, I must admit I have felt a bit under the weather the last few days. While it is easy (and fun) to blame just visiting Winnipeg, I am really concerned it could be something more serious.

My symptoms include uncontrollable eye rolling, unexpected mood swings from laughter to anger, and the urge to put my fist through my screen when I hear the name “Johnny Manziel.”

I am sick of his multiple pro days.

I am sick of him turning down a contract and then saying he would play for free.

I am sick of hearing about his “desire” to come to the CFL when he is courting every other league.

I am sick of #ComebackSZN

I am sick of hearing if he sneezes.

I am just sick of it all.

I understand that media is a business. I understand that if Manziel really does have his crap together it is a great story. I know that he could be a really good player if he remains focussed and dedicated to the game.

And I understand that a story about Manziel tweeting his favourite sitcoms of all time would move the needle more than a story about Dan Clark flying into Northern Saskatchewan and talking to school kids about bullying. But doesn’t mean I haven’t had enough of it.

Not saying players like Dan Clark don’t get covered, but they don’t get 5 stories in one day an hour apart with different angles and analysis keeping it in the news cycle.

On the plus side, the players and coaches are starting to speak out. You could see it in their face at CFL week if they got a Manziel question. You see it on twitter when another “Manziel to CFL” story is thrown in the new cycle.

It came to a head this week when Ottawa Redblack Receiver Greg Ellingson vented his frustration, and brilliantly, didn’t mention Manziel by name to not feed the beast.  However, it was all for nought, as people started mentioning “you know who” in the replies. 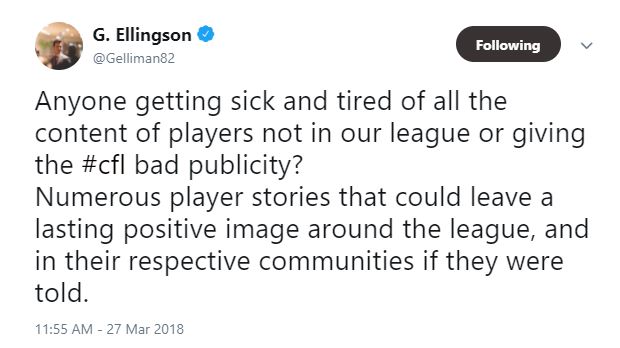 And he continued his point 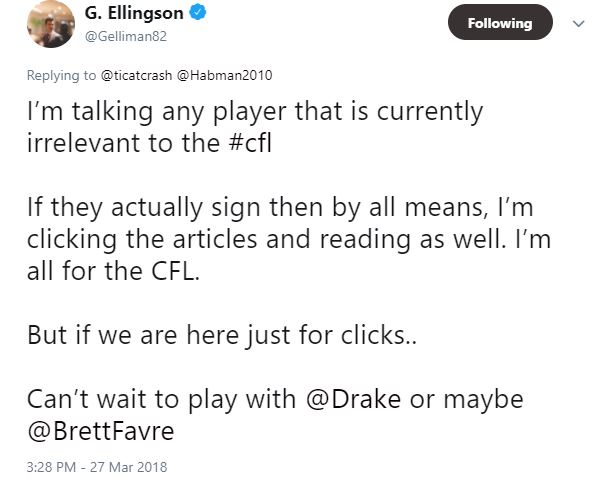 Then the great ambassador for the CFL, BC Lions Special Teams Coach, and owner of an all caps keyboard Jeff Reinebold made his feelings felt. 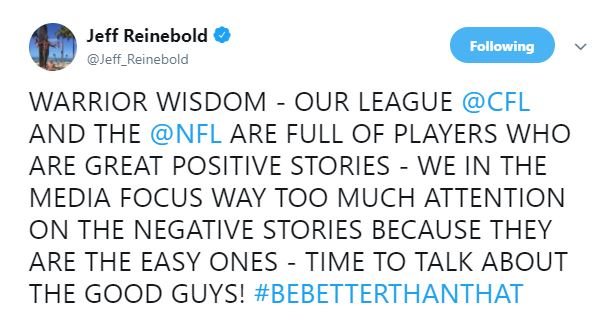 Ellingson and Reinebold are probably the start of more speaking out on this and hopefully more start.

And who knows, maybe in a few short weeks when camp starts hopefully the players there will be enough to “move the needle”