Former Riders DB Jovon Johnson took to Facebook to write a very heartfelt thank you to those that made the last couple of season of his CFL career special.

He thanked the fan base, the team, the coaches and people in the community that were special to him.

However, when it came to talking about his teammates there was an honesty that is rare in professional sports. 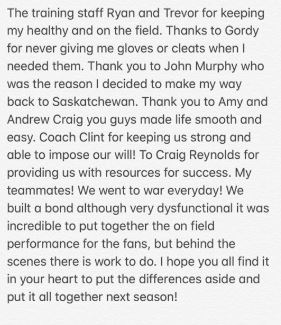 “My teammates! We went to war everyday! We built a bond although very dysfunctional it was incredible to put together the on field performance for the fans, but behind the scenes there is work to do. I hope you all find it in your heart to put the differences aside and put it all together next season!”

Johnson did not go into further detail and continued to thank other people.

You can check the wonderful thank you here.