NFL Preseason a no go at Mosaic?

According to John Gormley of Rawlco Radio, the NFL preseason game that was being looked at for Mosaic Stadium is no longer happening. Gormley, who originally broke the story, says the Roughriders balked at the idea of an NFL game happening at their home stadium. Rumour has it, both Edmonton and Winnipeg have stepped in to bid on the game.

This statement by John Gormley comes on the heels of a tweet from NFL Insider Ian Rapoport stating that the Raiders were mulling over the idea of playing in Saskatchewan. 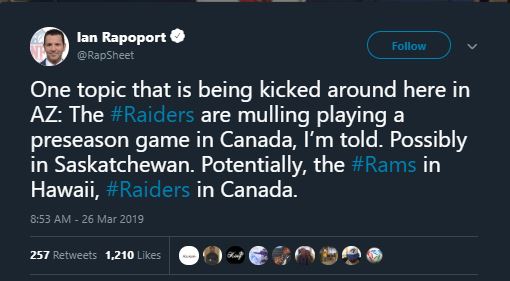 With the NFL schedule release coming in early April, this story should come to a conclusion soon. Week 3 of the NFL preseason will likely take place between Friday, August 23rd and Sunday, August 25th. The Roughriders do have a home game scheduled for Saturday, August 24th, which could have also played a role in this event not panning out.