Piffles Podcast and Cody Fajardo team up to raise $6,000 for HRF & NICU 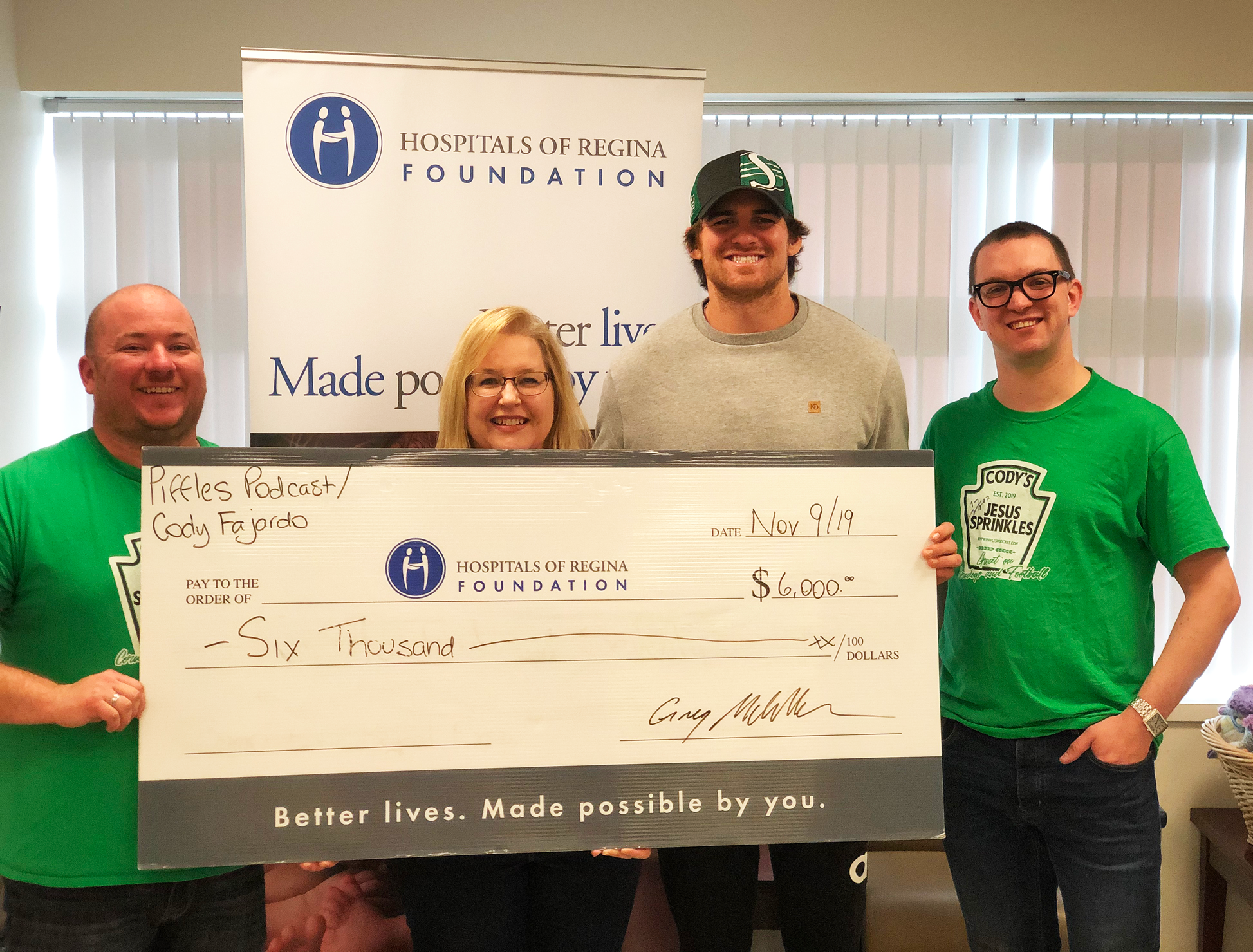 What started as a goofy idea over Greg’s morning coffee on August Long Weekend turned into a donation of $6,000 to the Hospitals of Regina Foundation (HRF) and the Regina’s Neonatal Intensive Care Unit (NICU) on November 9th.

“I was sitting on the deck at Moosomin Lake drinking my coffee and scrolling through Twitter and saw #SprinkleOfJesus trending and the picture of Cody Fajardo with the corndog covered in ketchup and it just clicked. I grabbed my laptop and started working, it was just supposed to be something for a laugh but it caught on and Cody liked it even though I didn’t tag him in it, ” Greg said.

Greg then saw Cody’s DMs were open and reached out to him about capitalizing on the popularity of the design and the phrase while doing some good for the community.

“Alex, Steve, and I aren’t doing the podcast to get rich, we are 3 guys that like talking football and we just happen to also like to give back to the community that supports us. Over the past 3 years, including this donation, we have helped raise over $12,000 for various causes in Saskatchewan. So I took my shot and sent Cody a DM laying out what I had in mind and what we could do. Fortunately, he liked my pitch and chose us over other people looking to market the phrase.”

The charity was also chosen by Cody, “Cody wanted to keep all the money in Saskatchewan because it was his new home and he wanted to do good here. We gave him a list of a bunch of local charities, and they are all deserving, but he picked HRF pretty quickly.”

It didn’t take long for the shirts to catch on, “We initially ordered 50 to see what demand was, well those disappeared in less than 2 days and we were officially taking preorders. It was mindblowing to see the emails constantly rolling in.”

The campaign lasted a litle over 2 months and had orders come in daily. There were shirts shipped all over Saskatchewan, as far east as the maritimes, as far west as Vancouver Island, north up into the North West Territories, and some were shipped down to both California and Nevada. There were even special Red and Orange ones made for Stampeders and Lions fans, the campaign was an incredible success.

On November 9th Steve and Greg from Piffles Podcast and Cody met with representives of HRF and NICU took a tour of the facility and presented the cheque for $6,000.

“That tour made all of our hard work on this charity event worth while” Steve commented. “Seeing first hand just how much equipment and resources is needed on a regular basis was mind-blowing”

Cody was very grateful for Piffles hard work on the campaign,

“Just want to extend a huge thank you to Piffles Podcast on collaborating something that was simply just a phrase and turning it into an idea that will have a huge impact on our NICU here in Regina. Without their tireless help none of this would have been possible.”

But even though the October 1st deadline is past it doesn’t mean campaign is completely over according to Greg,

“We are still getting requests for shirts over a month after the close of the campaign and we also just found out that HRF is getting requests for the shirts daily, so we are thinking of doing another run in the offseason. So who really knows how much more money we can add to the total, but I would love to find out.”

**Piffles Podcast would like to extend a huge thank you to Tall Grass Apparel for their support through this charity drive. Their hard work in making sure the shirts got done and over to us, allowed us to keep up with demand throughout the entire process**