On Saturday morning at 11:30am, the first (annual?) Piffles Podcast Rush Bus to Saskatoon left the parking at Northgate Mall in Regina and headed down the highway towards Saskatoon, excited and boisterous as we prepared for an entertaining day of Lacrosse. 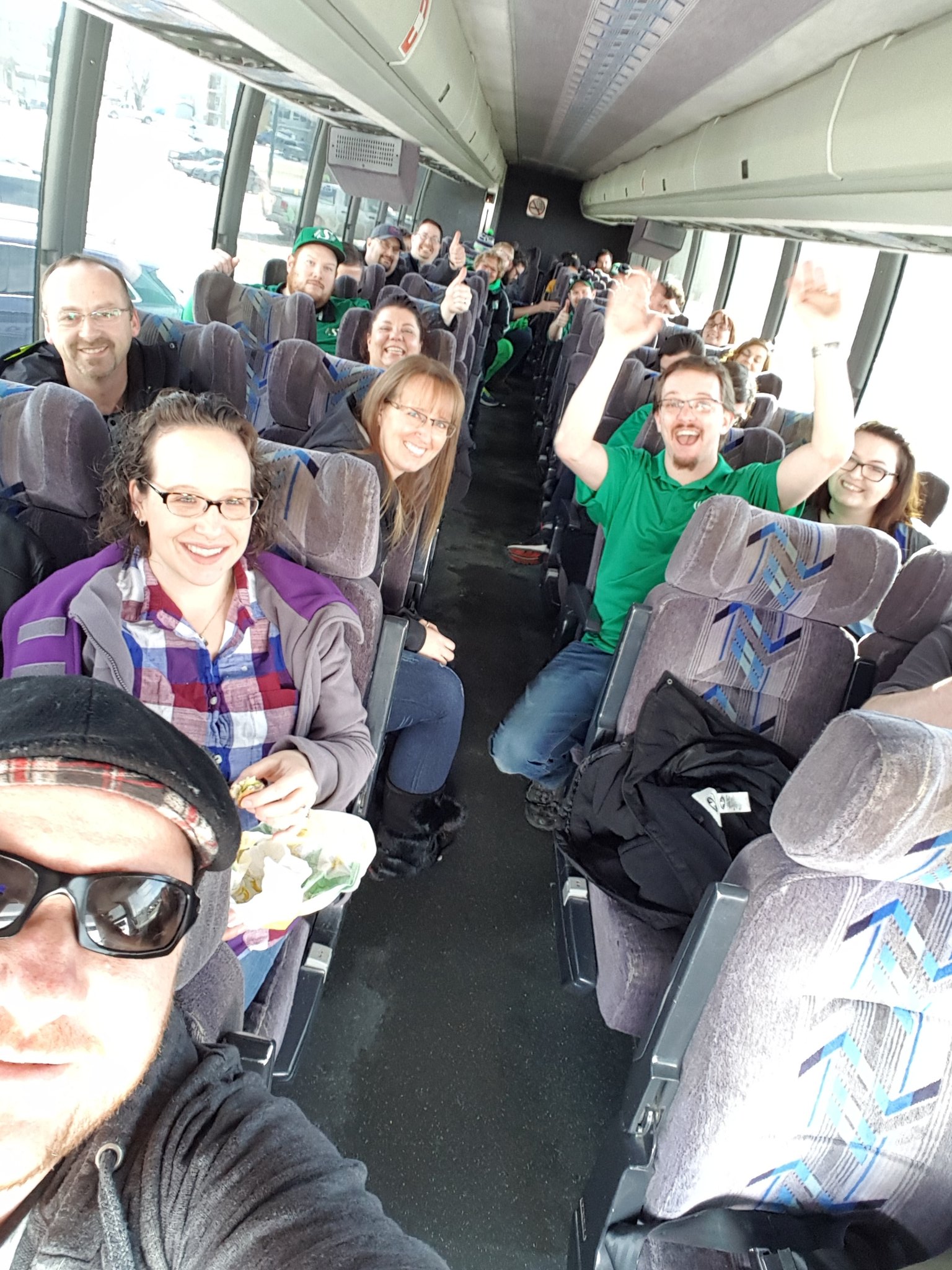 Before we get in to the event itself, myself and the rest of the gang from Piffles Podcast would like to give a huge shout-out to our sponsors who had a major part in making this event a resounding success. We are truly lucky to have some amazing sponsors, and our bus passengers were party to some pretty great prizes from some of the following:

As we go through the fun, I will certainly mention some of the amazing prizes from this great group, but all of them had a hand in making this event, and our show/site, what it is, so thank you!

The plan was to meet up for 11:30, with the expectation of actually hitting the highway closer to noon, but all 32 people were on board and ready to go by 11:15, so Jake from Engelheim powered up the bus and headed towards highway 11 earlier than anticipated. By the way, Jake was an absolute gem and if you are ever looking for a charter to anywhere, deal with Engelheim and ask for Jake – you will not regret it.

Dairy Queen got the prize train (and singalong) going by tweeting out “the first person to sing Wheels On the Bus” wins a free blizzard. Once people realized there would be prizes on Social Media, the singing commenced soon after. They would follow this up with a great trivia question for a free Treatzaa Pizza. They tweeted out a picture of Bon Jovi, with the question: What Song goes with Davidson, SK. After a couple minutes of confusion, a passenger correctly guessed “Living On a Prayer”. Why, you ask? Because we were halfway there.

We decided to move away from the Social Media trivia, and start some on bus Rush trivia to give some great shirts from Tall Grass Apparel. Things like, where did the Rush move from? Who did they beat to win their championship 2 years ago? How many championship series have the Rush been in? Who are they playing tonight? The passengers were quick to answer, and shirts were handed out to their happy winners. 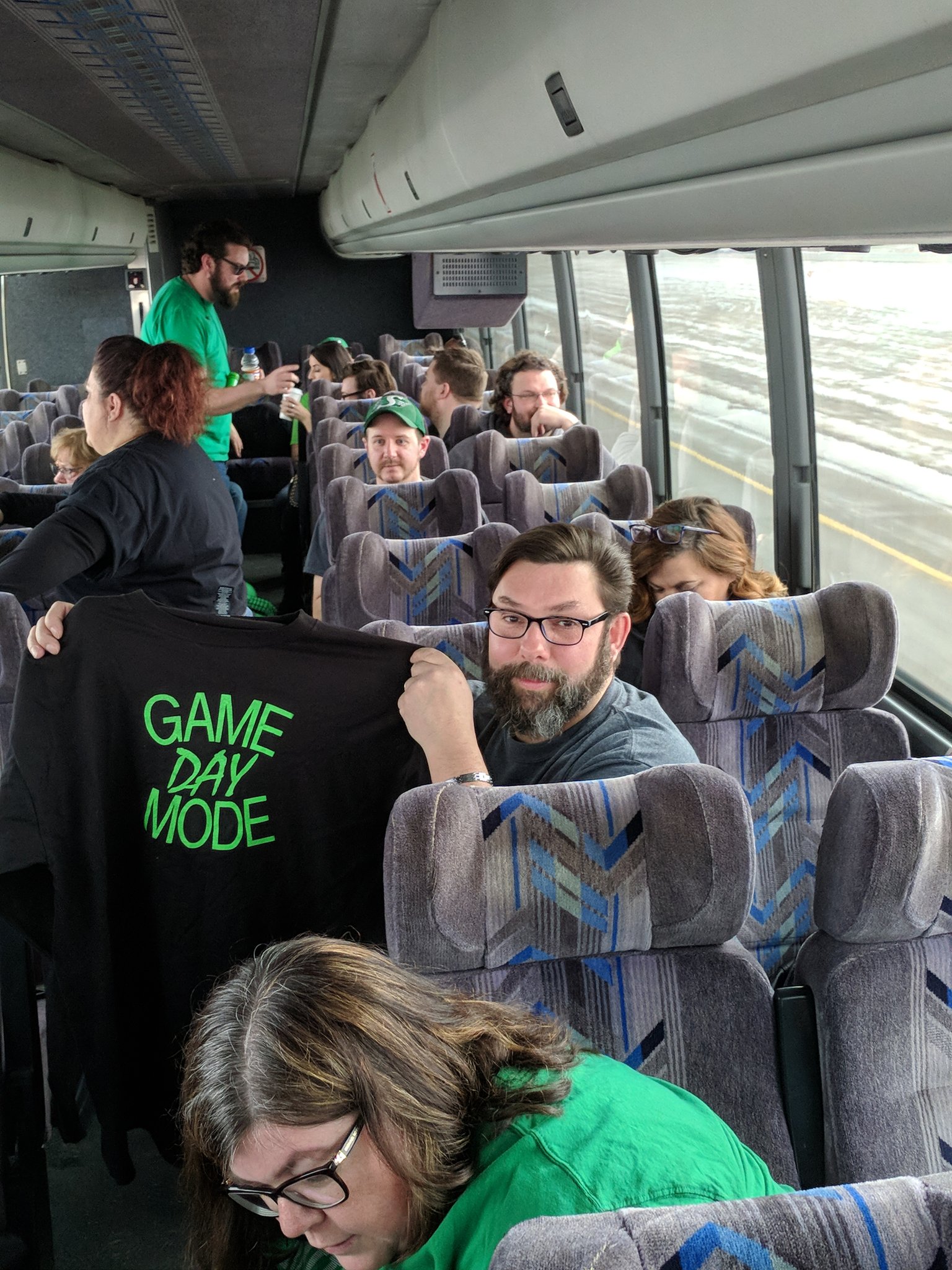 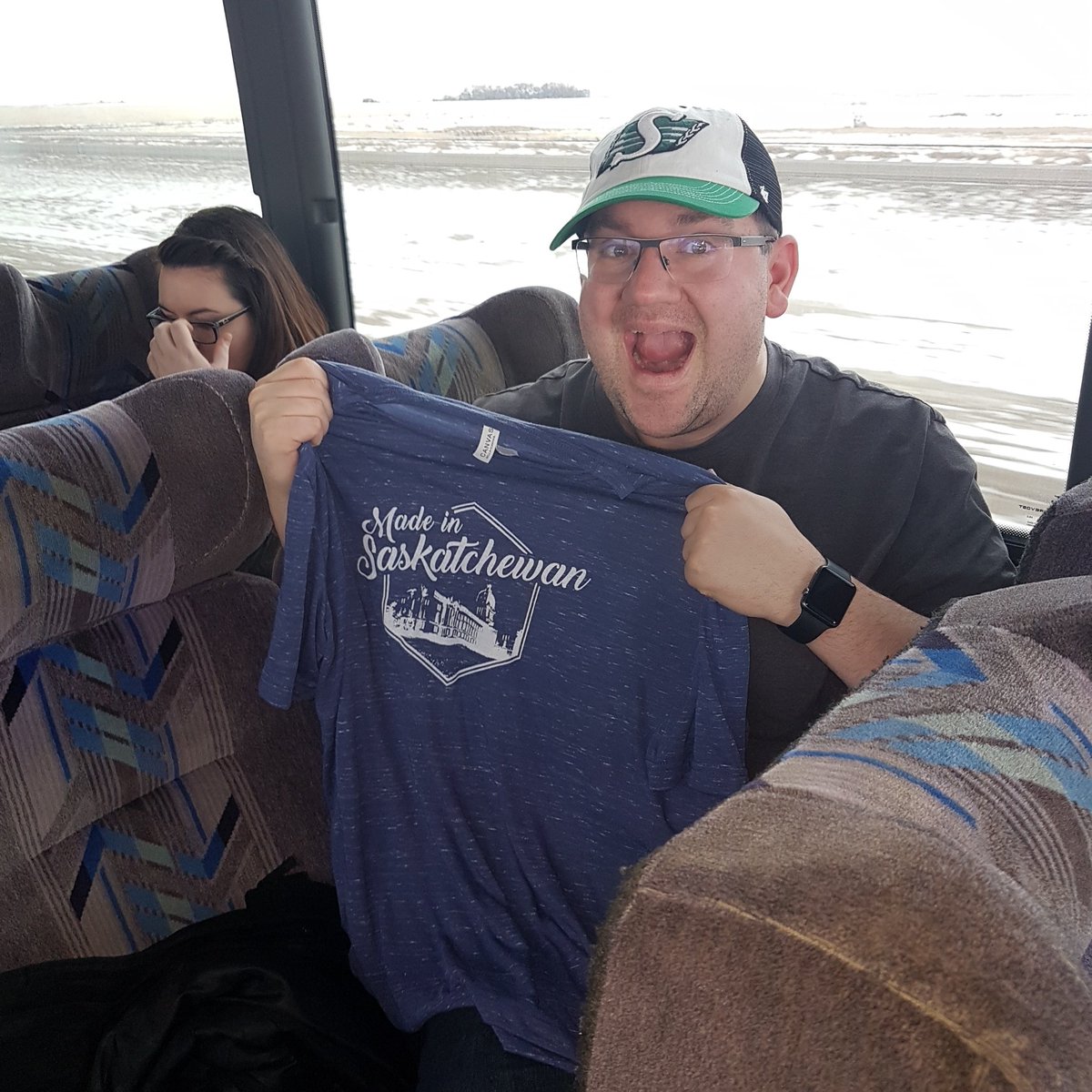 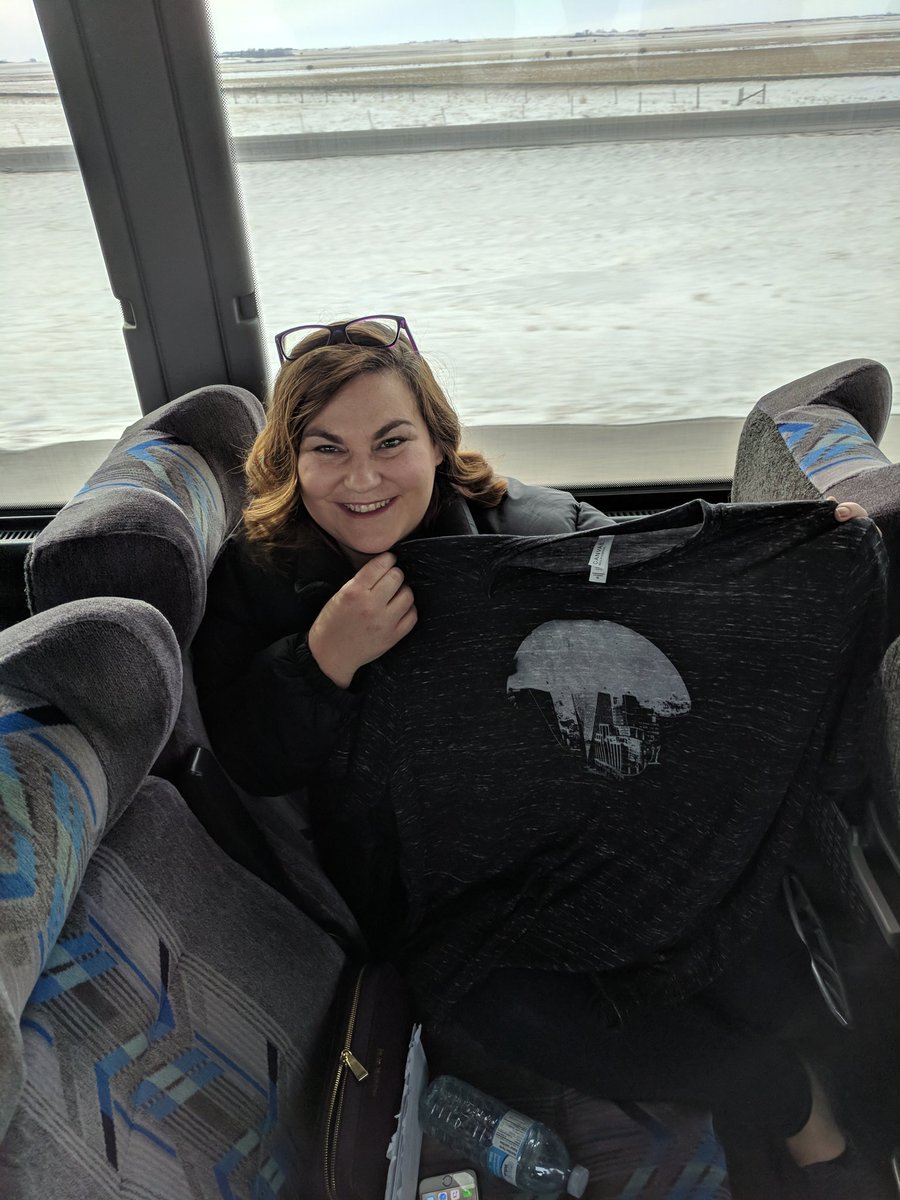 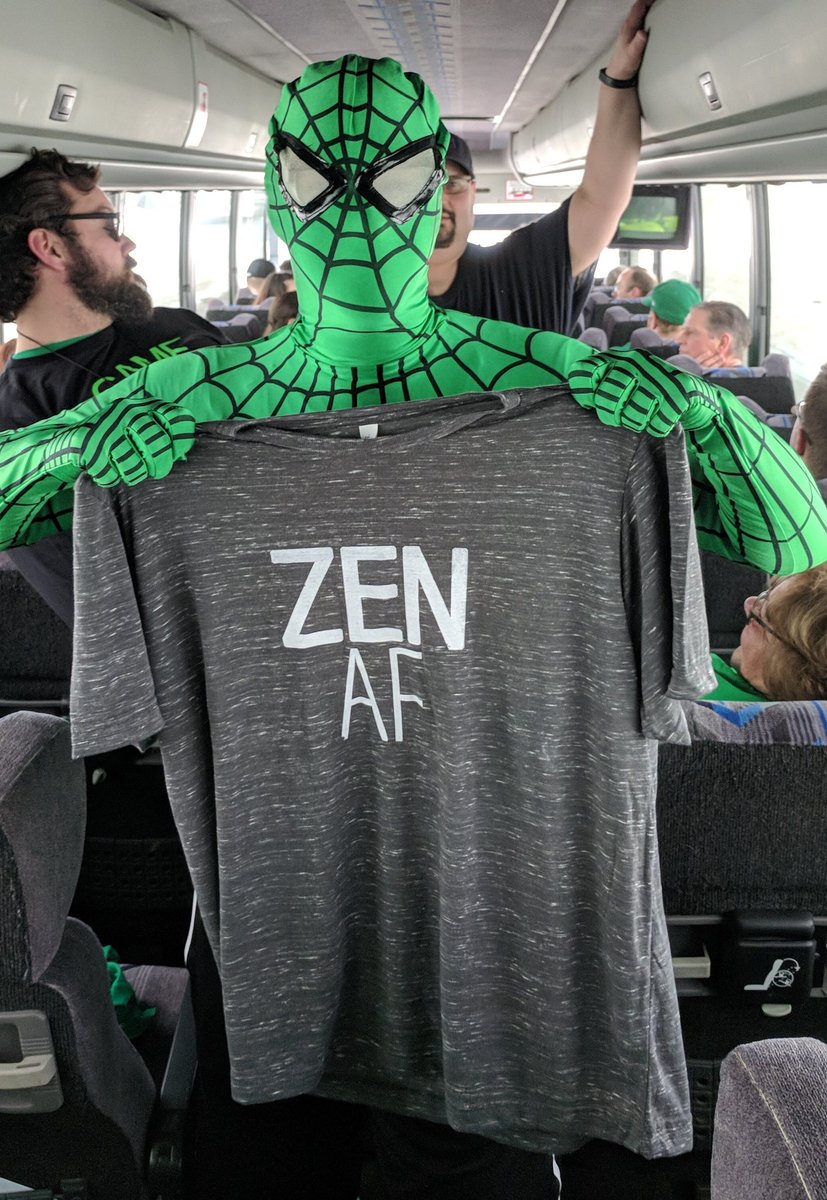 As we passed Davidson, with Any Given Sunday on TV in the background we drew for some of our major prizes. A $50 Victoria’s Tavern Gift Card, a $60 prize pack from DQ on Elphinstone, and a Rush jersey from the Saskatchewan Rush. 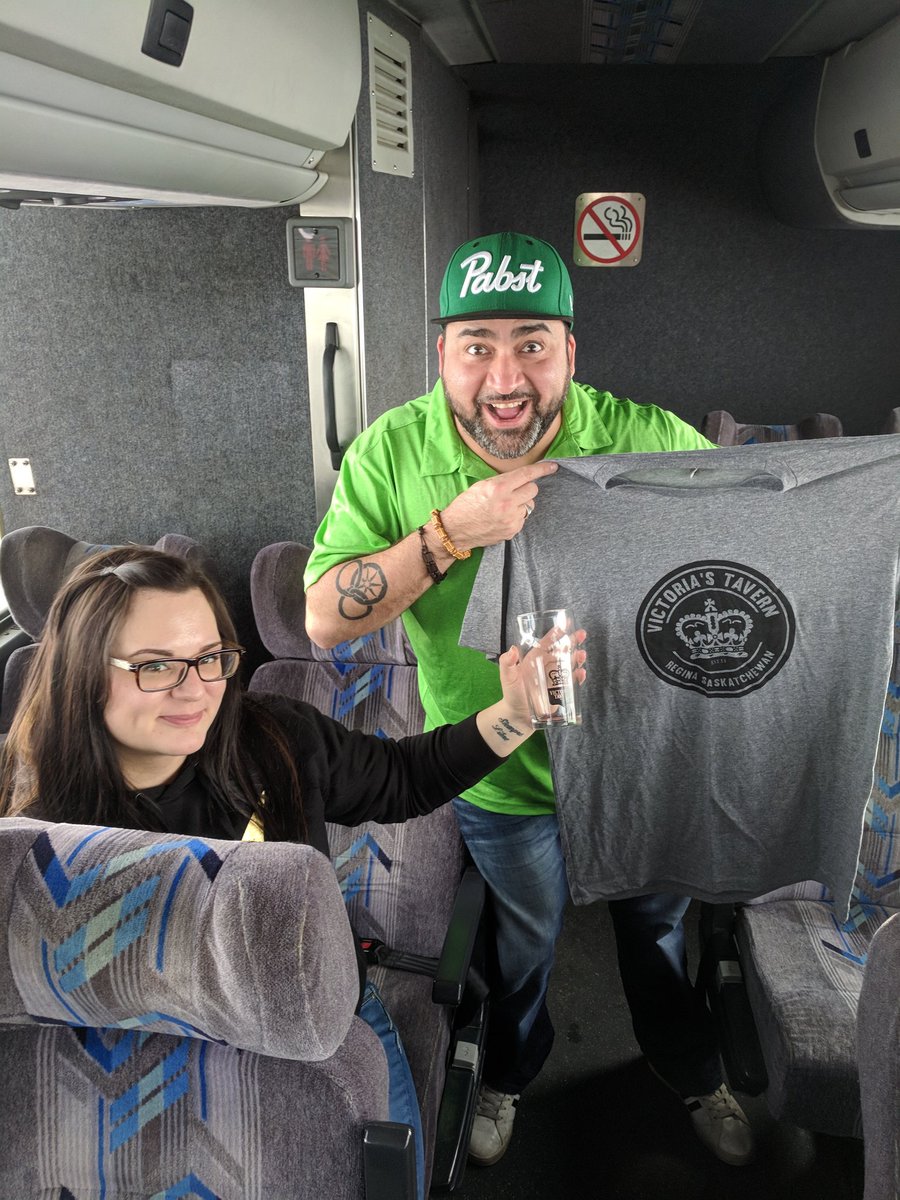 Once all the prizes had been handed out, all that was left to do was sit back, relax, and wait for what awaited us at Specklebelly’s Pub in Saskatoon. Little did we know we were in for a red-carpet welcome.

About 10 minute’s outside of Saskatoon, a tweet from Specklebelly’s gets people talking, as a picture of the prizes that awaited us at the bar was included.

We arrived to your friendly neighbourhood pub around 1:30/1:45, about an hour ahead of schedule, and were welcomed in by the General Manager, Doyle. We added another 8 to our group of 32 to add a little more frivolity and fun. $3 highballs ($6 doubles/$9 triples) and $7 schooners awaiting the 40 of us, as we piled in ready for a great pregame party. For the next several hours, as we waited to board the bus to the Sasktel Centre, drinks were poured, food was eaten and more prizes were given away. You can tell Specklebelly’s is a locals bar, based solely on the looks on people’s faces as they walked in to find 40 people they’ve never seen before having a solid time in the middle of their bar. And we were certainly having a solid time. 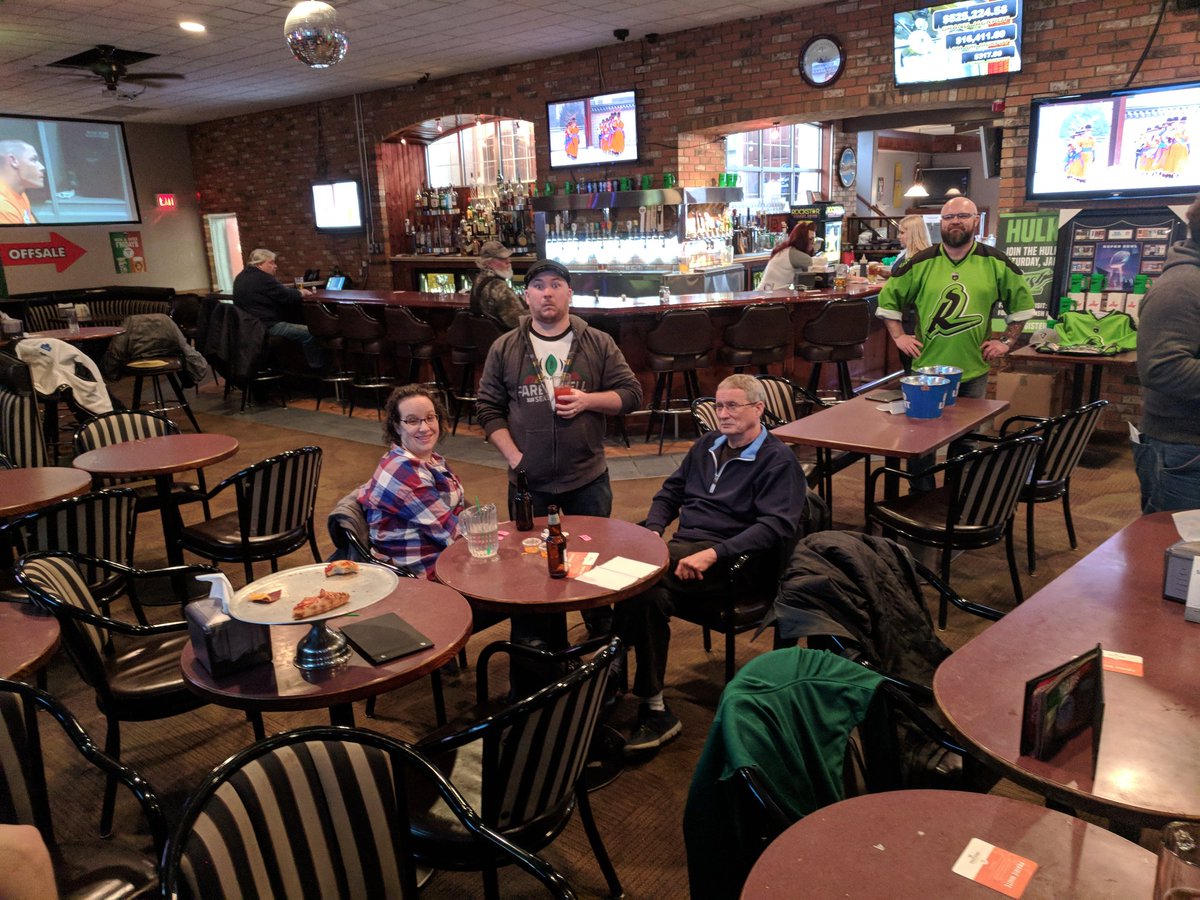 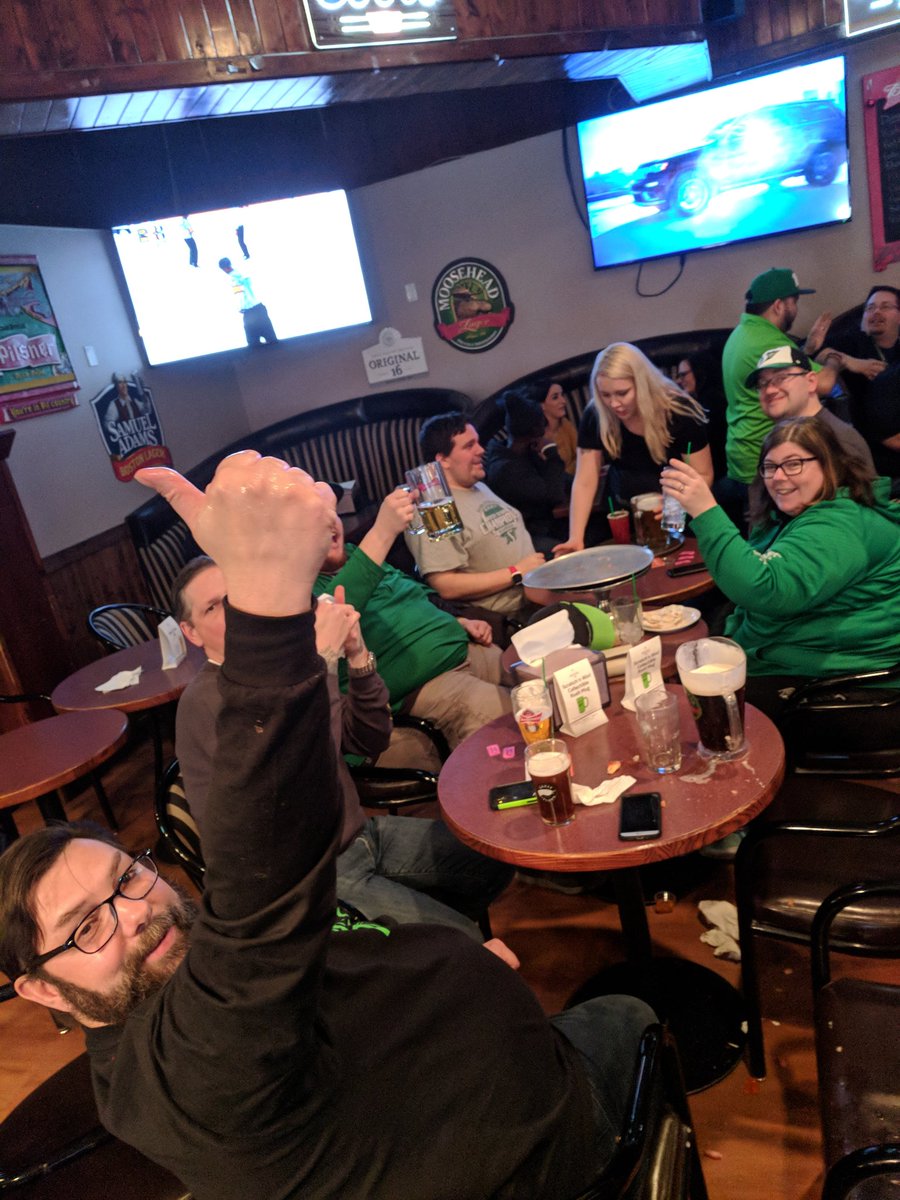 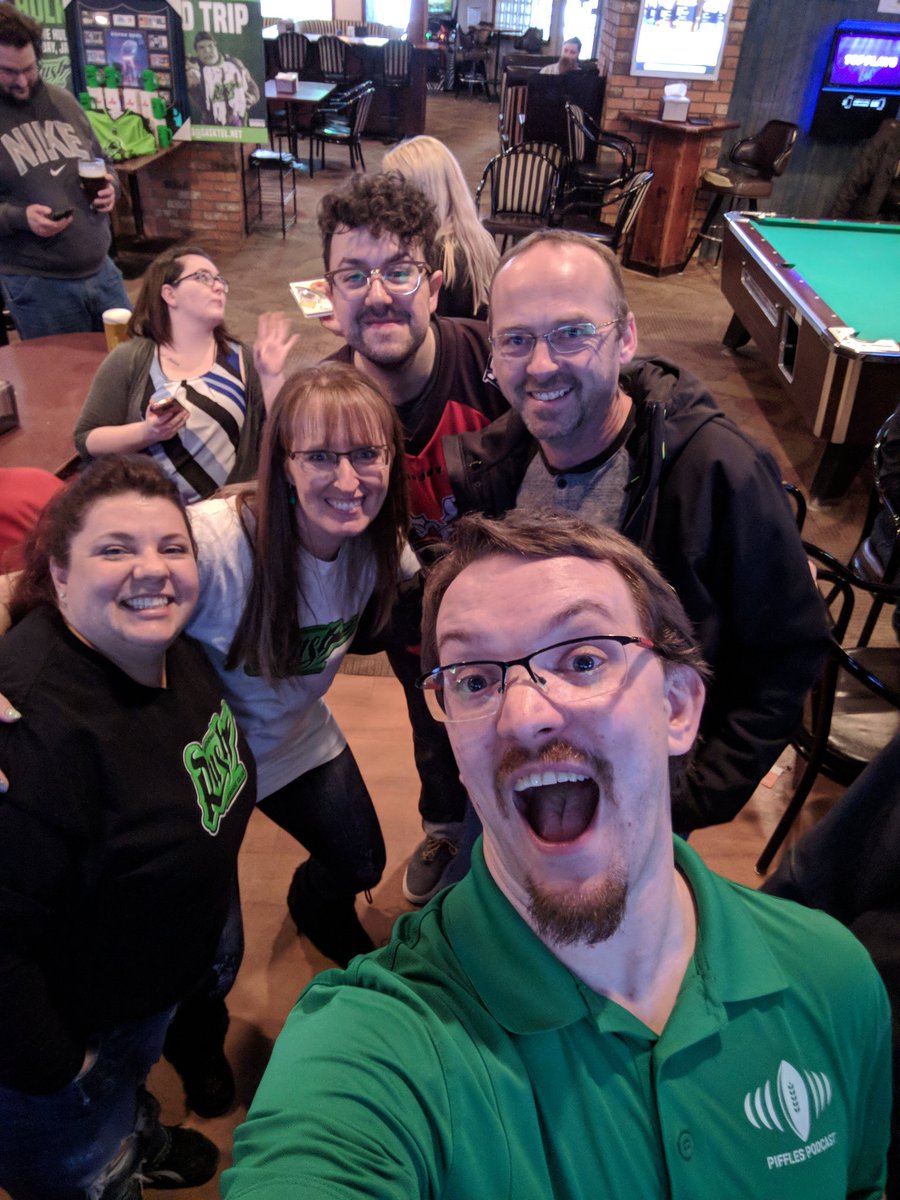 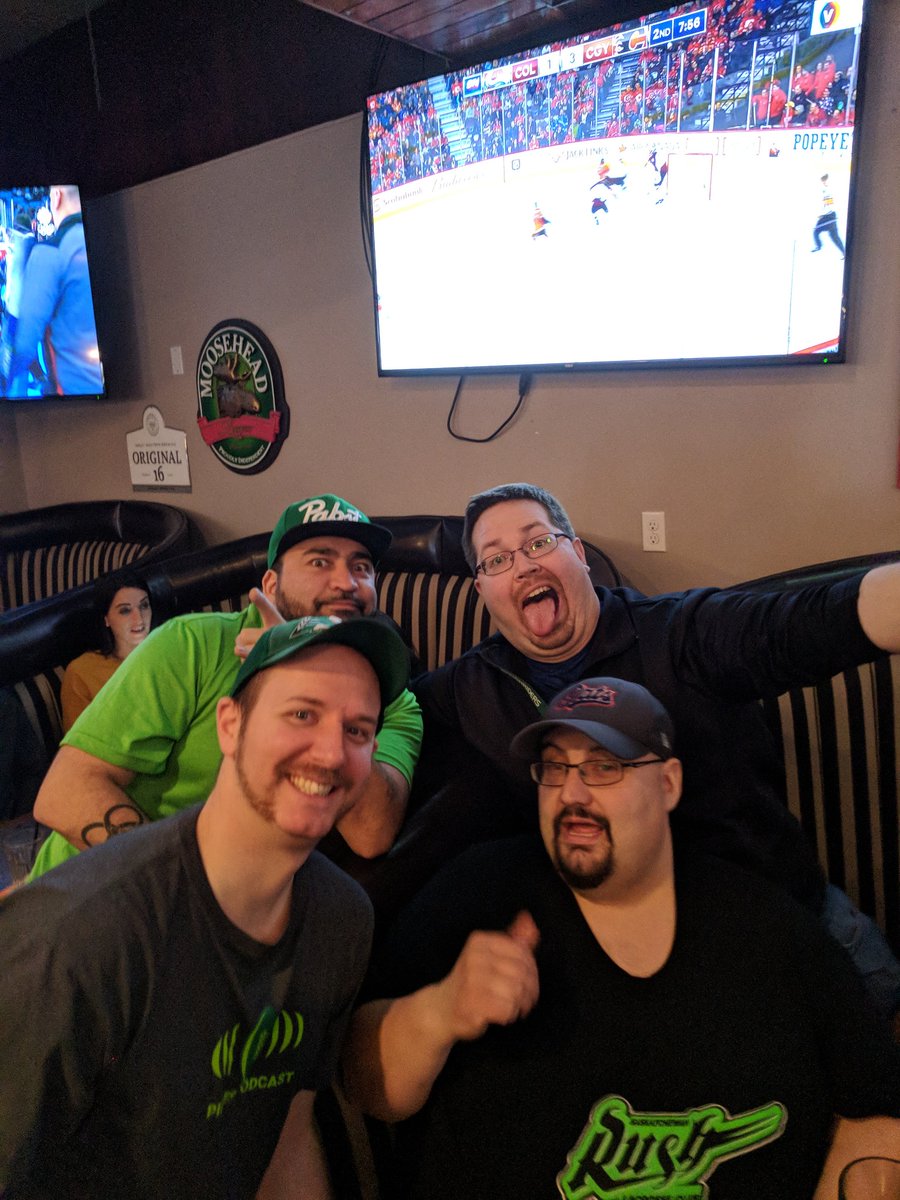 Some of the prizes from Specklebelly’s included Rush cups, Budweiser Bud Light up cups, a Rush jersey and a framed picture of all 52 Super Bowl tickets. As I said before, the bar went above and beyond in their support for this event, and we will be back the next time we roll a bus through Saskatoon. A huge shout out to our server Shae, who did an amazing job handling 40 loud and crazy bar patrons while still tending to her regulars.

Alas, at 6:00pm it was time to get back on the bus and head to the Sasktel Centre to watch the Rush take on the Calgary Roughnecks in an NLL installment of the Battle of the Prairies. The game itself was great, as most battles of the prairies usually are, with the Rush winning 10-6 on the back of a great performance from goaltender Evan Kirk. With the victory, the Rush became the first NLL team in history to clinch a playoff spot in February. They still have 5 more home games remaining and 7 games left overall. I guess you could say they’ve had a decent regular season thus far. 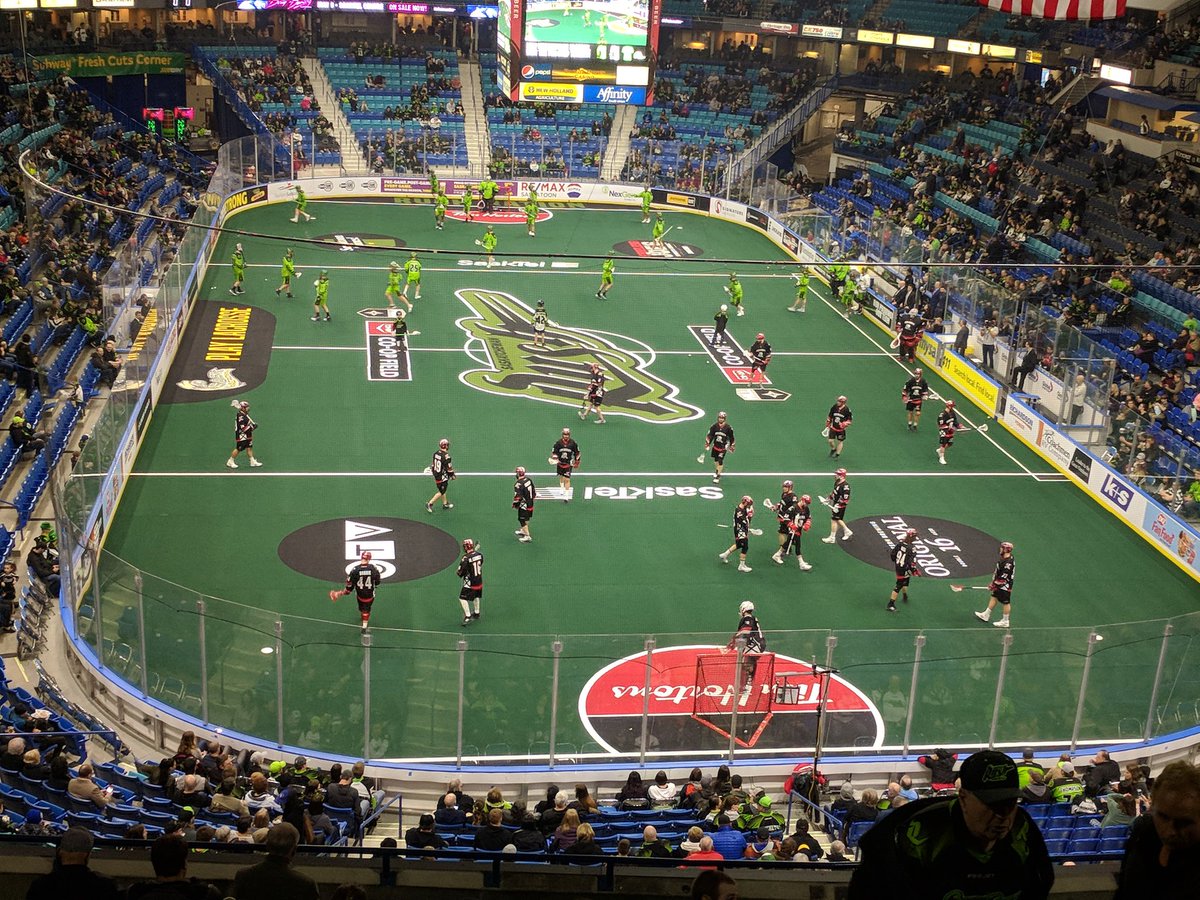 When the game ended, 32 exhausted but happy passengers hopped back onto the bus. After a quick role call we headed back down the highway towards Regina for a much quieter trip back.

Once again, a huge thank you to Jake from Engelheim Charter for getting us all home safe and sound around 1:30am. All in all, a great trip filled with a ton of fun, good prizes and great people. If you missed out on the first Piffles Podcast Sports Bus, there will be others in the future. Stay tuned to www.twitter.com/PifflesPod or www.facebook.com/pifflespodcast for details on future trips.

One thing we did not mention until now – All profit from this event is being donated to the 42nd Annual Kinsmen Telemiracle. Thanks to the 32 passengers on board the bus, we raised $300 for a great cause.