Just like the farmers, us football fans of the Saskatchewan Roughriders are all too used to it… we’re in next year country now. The Riders lost at home to the Winnipeg Blue Bombers in the West Semi-Final on Sunday. After news broke late Saturday night that Zach Collaros wouldn’t dress for the Riders, I knew it was over. Not that Collaros is the key to this team’s 2018 success, but he is clearly a much better QB than Brandon Bridge.

This game was ALWAYS going to be a tough, hard hitting, low scoring game and it was. Kudos to the Bombers and their fans for getting to the next round. Not that I will be cheering FOR you against Calgary, just to heck with Calgary, ABC after all. The Bombers were clearly the better team and no excuses from me, they deserved to win and Saskatchewan didn’t. I could go on about the game, but we will save that for episode 102 of the Piffles Podcast later this week. I can handle my team losing, honestly, I don’t mind anymore. I was entertained and as football is entertainment, I left Mosaic Stadium, well, not happy, but I was okay with the result. I get over things pretty fast nowadays.

BUT THAT HEAD SHOT ON BRANDON BRIDGE. Shame on you CFL, your refs, your imaginary “eye in the sky” and directly on you Commissioner Randy Ambrosie. Mr. Ambrosie is doing some wonderful things for the league. The CFL is trending the right way off of the field, but all I’m seeing is lip service when it comes to on the field.

Two straight games, the Riders had their starting QB absolutely DRILLED in the head by dirty, cheap shots. Collaros hit by Odell Willis of BC and on Sunday, Bridge hit by Bombers Jackson Jeffcoat. BOTH times, no penalty called. Both times, the QB was taken out of the game. If the refs aren’t going to call these as penalties, then to hell with player safety, huh?

Tom Vallesi, the head ref in this game missed the hit on Bridge’s head because Rider receiver Patrick Lavoie was in his way… NOT AN EXCUSE. Your ONE job as head ref is to WATCH THE QUARTERBACK. You need to be in better position. IF you miss a call like this, this so called “eye in the sky” NEEDS to be able to call this. As it stands, the eye in the sky doesn’t have that ability. BULL S**T!

Commissioner Ambrosie was so quick to get rid of celebrations with a beer (which was awesome, thanks Jon Gott), rightfully so, but we have to wait until next year before something is done about BLATENT HEAD SHOTS? You truly don’t care about the safety of the players if you are willing to wait that long. Back to back games this has happened!! Your statement after the game, while accurate, doesn’t mean anything until you actually DO something. 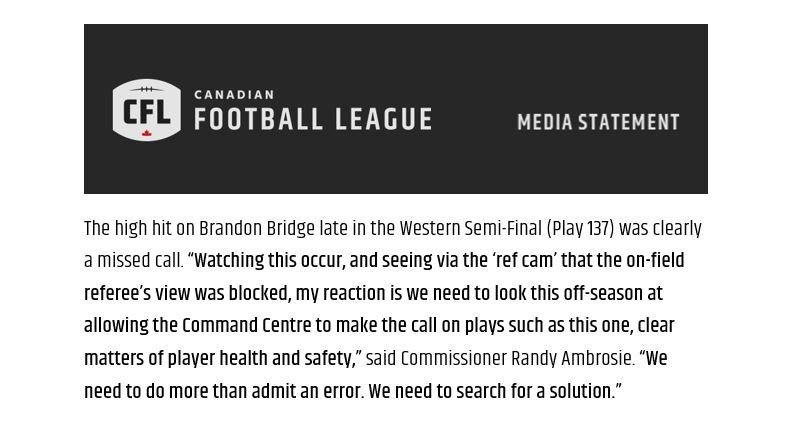 The solution is right there in front of you… The eye in the sky needs to be able to call it. The league needs to take the NCAA and NFL approach and call these targeting penalties. 15 yards (it should be 25 yards) and eject the hitting player from the game. Intent or not. That’s the only way these guys will learn to not hit the head. Brandon Bridge is 6 foot 5… you gotta be aiming pretty damn high to begin with if you hit him square in the jaw.

Two weeks ago, Riders Head Coach Chris Jones had to waste a challenge on the Willis hit on Collaros for it to be called. This week, he didn’t have a challenge available (he had to use it on a pretty obvious pass interference non-call earlier in the game), so there was nothing he could do. This should NEVER be reduced to replay. This needs to be addressed by the refs in game and by the eye in the sky. I understand and accept that reffing will never be perfect. That’s okay, they are human and they do a job that simply put, isn’t that easy. If they miss a hold, whatever. But this is about the SAFETY of the players in our league. This HAS to be top of mind by EVERY league staff member.