Preseason Game – What to Watch For

When the Riders take to the field tomorrow night in Calgary, a good portion of their starting roster is already set, especially on defense. Unlike years past, this gives us very specific battles to watch for, based on how camp has gone. There’s no need to watch the defensive line or defensive backs, we know who will be starting. The offensive line will be set once Dan Clark fully recovers, which doesn’t appear to be far off, though it will be interesting to see how Dakoda Shepley performs in his first preseason. So who should we be watching out for?

It wouldn’t be a Roughrider season if the fans weren’t extremely interested in who will sit #2 on the Riders QB Depth Chart. We know Zach Collaros will be behind center on June 13th (barring injury, of course), and we won’t see him on the field at all tomorrow. Instead, we will get our first look at Cody Fajardo in Rider green. We will get our first opportunity to see if David Watford has progressed past “token QB on the field while our DB Nick Marshall takes the goal line snaps”. How will Isaac Harker and Ty Gangi look in their first taste of CFL football? We will get a good look at all 4 QBs, but the biggest battle to watch will be between David Watford and Cody Fajardo. Ridernation will need to see one of them to step up and take control of the number two spot.

There are a couple of interest spots to look at with the 2019 Riders receiving corps. Wek now what to expect from some of the mainstays from last year, like Shaq Evans, Kyran Moore, Naaman Roosevelt, etc. But what about the new guys, and late additions from last year? I’m looking to see how European Draft Pick Max Zimmerman shows in his first start. I want to see if KD Cannon can continue where he left off to close out 2018. Most importantly, I want to see if Paul McRoberts can continue to show what he’s shown through two weeks of training camp and earn a spot on this roster.

Then there is the Canadian spot. With injuries to Justin McInnis and Brayden Lenius, Mitch Picton has the best opportunity to unseat Cory Watson as the lone Canadian receiver. Obviously, Patrick Lavoie will also feature into the offense when the season kicks off, but it would be great to see one of the young Canadians take over Watson’s spot early in the season.

Much like QB, its clear William Powell will lead the backfield on June 13th. We know Marcus Thigpen will be the change of pace back, and Kienan LaFrance will be the ratio guy who the Riders need to go that route. Craig Dickenson has already said only one of Jamal Morrow or James Butler will make the team, and it will come down to their performance on special teams tomorrow night. Might be a fun battle to watch.

Cameron Judge gets the start at the WIL spot for tomorrow night, and the question now becomes. Will we see a rotation at this spot like we did in 2018, or will we see Judge take over the spot completely from Sam Hurl. No matter what, I still expect some kind of rotation through the season, but the preseason will go a long way to determine how heavy that rotation is in 2019. 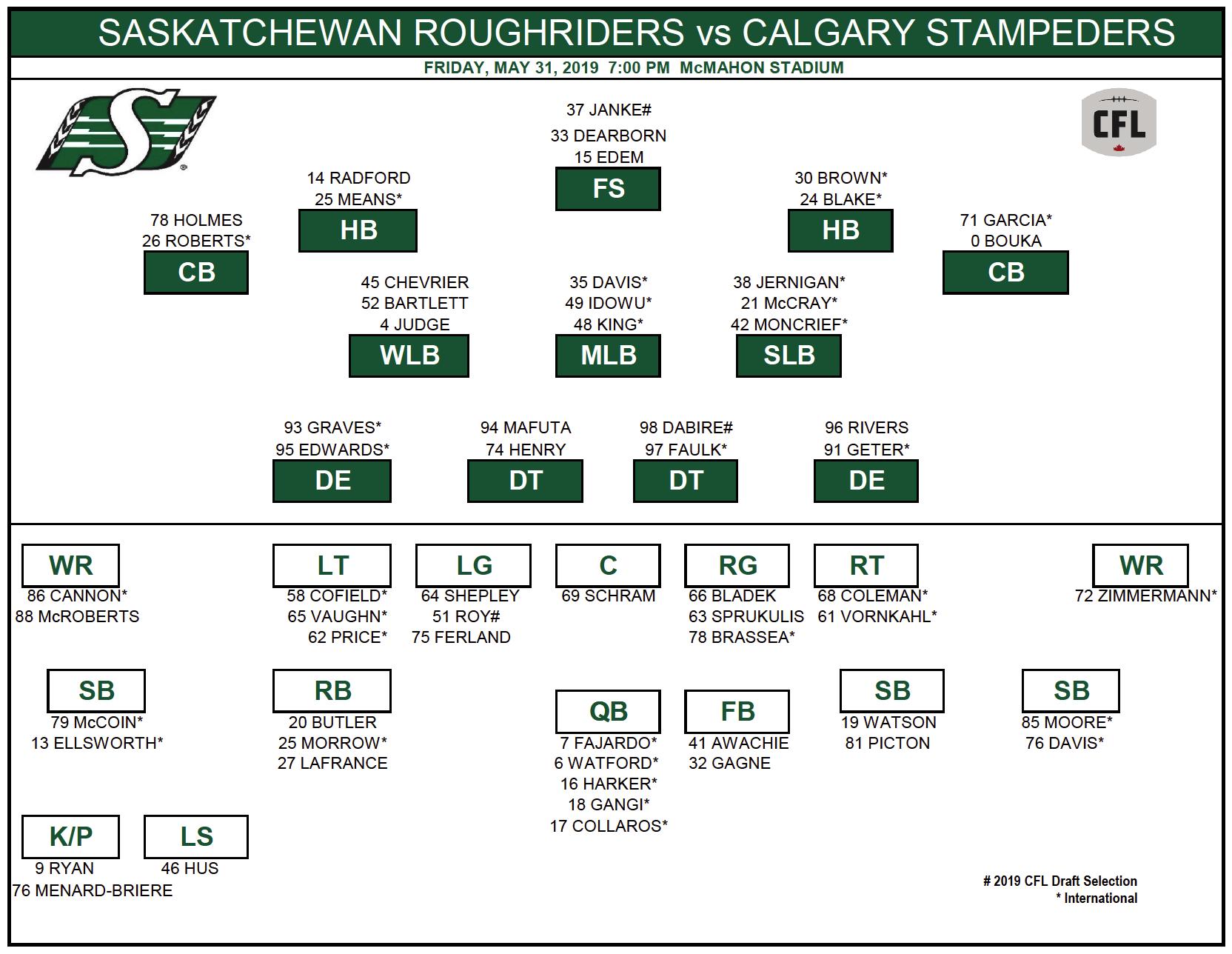