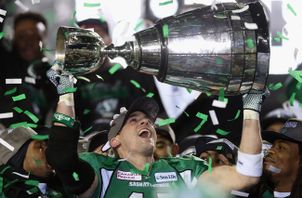 We should be hearing fairly soon who will be announced as the 2019 Riders Plaza of Honour Inductees and one name stands out above the rest… Linebacker Mike McCullough.

McCullough won 2 Grey Cups with the Riders, in 2007 and 2013 and was a solid, dependable player on defense for his 11 CFL seasons. McCullough’s best contributions were off the field though. After the 2010 season, he was awarded the first inaugural Jake Gaudaur Veterans Award, was the Mosaic Community Award winner in 2008 and 2009 and did numerous other charitable work as well, most notably for Jesse’s Journey.

Other former Riders that should be inducted into the Plaza of Honour rather soon include: General Manager Roy Shivers, Defensive Back Omarr Morgan, Fullback Neal Hughes and current General Manager and former Offensive Lineman Jeremy O’Day.