I honestly hate that phrase, and I mean I HATE it.

It is vastly overused, just because someone once put on the Green and White doesn’t put them in the pantheon of George, Ronnie, Narco, Jurasin, and company.

Normally, I have a 3-year rule before I will even consider a guy for the honour, and that also includes where else he played and how they played here.

But one player has me waiving that prerequisite and that’s Bakari Grant.

He may have only been a Rider for one season, but I will be happy to consider him a Rider for life. Sure, the fact that he had a career year for receptions and yards helps but it was also he was one hell of a community guy.

One of the first things he did when he got settled in Regina was partner up with Hope’s Home and donated toys and books for every touchdown he got last year.

Also, when he found out about the Piffles Bowl and that we were also donating to Hope’s Home, he immediately signed on as “co-host.” He came out that night, met everyone, signed anything that was put in front of him and didn’t ask for anything in return. Helped make the night a rousing success and we were able to donate $1500 to Hope’s Home.

But he cemented his “Once a Rider” on Wednesday after he was packed up and moving out of Regina he had to make one more stop at Hope’s Home. 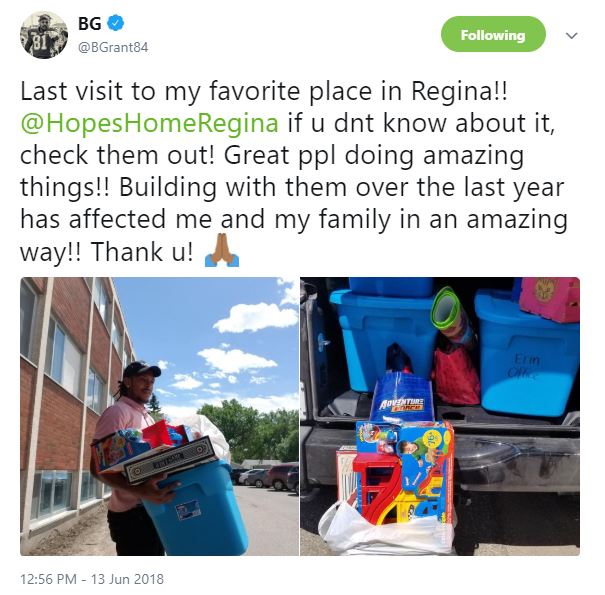 Thank you again, Bakari. Good luck and hopefully see you in Green and White again.

Another tough pill to swallow on cut day was the release of Rob Bagg, although I know we at Piffles were not too surprised about it.

We all love Bagg but we just had a feeling that it would be hard to be the “Rider for life” Assistant General Manager John Murphy claimed Bagg would be. He was still productive in his role, but behind Naaman Roosevelt, Duron Carter, and the emerging Caleb Holley the Riders could afford to go younger and cheaper in the National Receiver position.

And that’s what they did.

Football is a harsh business and never seems fair.

Thank you for all you did in Rider Green, Rob. From going undrafted and earning a spot on this team, to being apart of the “Canadian Air Force,” to winning the Grey Cup at home in 2013. Thank you.

I can’t wait to see you on the field again even if it isn’t in Green and White.

I joked on Piffles Podcast 79 that I could do a weekly segment about stupid things Kavis Reed does as General Manager of the Montreal Alouettes. While this seems like a joke that could run its course quickly I believe in both myself and Kavis Reed.

In case you missed it, during cut down day the Alouettes made a “clerical” error and “cut” Offensive Lineman Xavier Fulton. Why cut in quotation marks you ask? Because apparently, they didn’t cut him, and the wrong list was sent to the league and made public.

Fortunately, it was cleared up although it took over a half hour to get sorted out.

Thank you, Kavis Reed, you are the gift that keeps giving.