So close to “Coast to coast”

With a strong potential ownership group in Halifax the rumours have crashing harder than the Atlantic tide.

CFL Commissioner Randy Ambrosie ended his Randy’s Road Trip in Halifax and unlike previous stops, this one was broadcasted for all to watch live.  Speculation was the group, Ambrosie and the City of Hailfax were going to announce both a stadium and a franchise. In fact, one Maritime radio station based on sources from the City of Halifax reported it as fact and gave a location for the stadium.

Alas, nothing expansion related was announced during the stop, but you can feel the 10th franchise is coming.

The ownership group is strong, the City seems like they want a team, the fan base is there, and the CFL truly wants to be coast to coast.

Unless there is a major stumbling block, the CFL will be at 10 teams within the next 5 years.

Oh Johnny Manziel… Why can’t we quit you? Manziel tweeted the following. 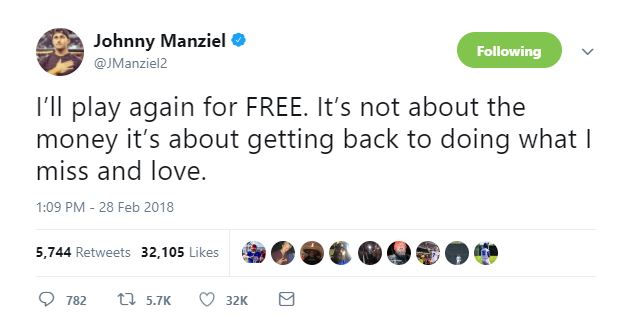 Apparently, Manziel didn’t take Economics 100 at Texas A&M because I don’t think he understands what the word “free” means. Reports came out during his negotiations with the Hamilton Tiger-Cats is that he was expected to get paid around what Zach Collaros, who was the highest paid QBs, was getting paid last season.

To be fair I can see his point, Collaros was highly paid to hold a clipboard for the Ticats for the second half of last season. And based on his time in Cleveland, Manziel is very adept at holding a clipboard for a lot of money.

But in all seriousness, Manziel was talking about taking no money up front and saying he was willing play on a practise roster just to get an NFL look.

Hard to believe there isn’t at least one team willing to take a shot on him, if that is indeed his asking price.

So, now that it is painfully obvious he never really wanted to come to the CFL we can stop talking about Manziel now right?… right?!?…

But we will never stop talking Duron Carter

When the Riders signed Duron Carter, Alouettes’ Flight Deck Podcast host, Cliffy D Pine, told us on the air that we would fall in love with Duron Carter.

He was right, and based on how much other CFL media outlets cover him so must everyone else.

Between Carter’s boastful swagger, his willingness to interact with the fans both online and in person, and his, ummmmm, faults (see Saskatoon and Winnipeg Airports), he is a lightning rod for attention.

Carter recently bragged that the CFL was boring till he came up north, which pissed off CFL fans from across the country. While the game whistle to whistle was never boring, most players off the field were as colourful as a glass of milk. Which was fine as the game was different and the advent of social media has allowed players personalities to come to the forefront.

And despite a vocal minority that is getting sick of hearing the name Duron Carter, he is good for this league, because he keeps people talking CFL football even in the offseason.

He engages with the fans, no matter what CFL team they cheer for.

Most importantly, he is kind of good at that football thing.

Now we just need to fix some of those faults.