“Its the most wonderful time of the year…”

I love this time of year!

Spring is an amazing time.

The days are getting longer, the birds are singing, the Leafs are out of the playoffs, and CFL mini-camps are starting.

Mini-camp is great for finding diamonds in the rough that have fallen through the cracks for whatever reason. Notoriously, Jonathon Jennings was discovered at a Roughrider mini-camp and unfortunately, depending on the story the Riders either didn’t bring him to training camp or just couldn’t get his name on the dotted line. Either way, he ended up in BC and looks like he will be a star for years to come.

Last year Chris Jones took a receiver turned him into a Defensive End and Tobi Antigha became the Riders nominee for Most Outstanding Rookie. There have been several reports out of Florida that Jones has been trying several players out of their regular positions, so who knows what surprises might show up in Saskatoon when training camp officially opens.

With the prospect of new players coming in it means some room needs to be made both on the roster and in the cap.

Hecht and Mays were expendable with the depth in the secondary. Ford and Blazsko were facing an uphill battle to crack the roster with the stud receiving corps that Jones has assembled.

The releases of Augustine, Meredith, and Dyakowski are a tad more surprising.

Johnny Augustine was the star of the CFL combine at the first CFL week in Regina yet amazingly went undrafted. He then went to training camp with the Eskimos as a non-counter National, then returned to school, and played his final year at Guelph.

The Riders then added him to the Neg list and signed him to a 2-year contract only to never use him. It seemed like after the Riders went and brought Messam back that another National RB would be a good insurance policy, but I guess that’s why I am not in the front office.

Meredith and Dyakowski are more puzzling because the Riders aren’t exactly deep at the National O-line position. Meredith makes a bit of sense as before he was drafted he was out of football “retired” because of illness. The Riders took a late rounder flyer on him at last years draft which could have looked like a giant steal if he would have panned out, but it was a low-risk high reward move.

Dyakowski, on the other hand, was the biggest surprise out of all of them. The Riders traded for Canada’s smartest man to help mentor their young O-linemen and be another presence on the O-line. Peter did both, he helped the offensive line keep the Quarterbacks upright for a league-leading 35 aerial touchdowns, and he helped mentor rookie Dariusz Bladek, who is probably taking his spot on the line.

I can honestly say I will miss Dyakowski as a Rider, he was engaging on Twitter and great to talk to in person even when the mic was off. I would love to see him in the league playing but if not, TSN should scoop the man up he would be an amazing asset.

On Wednesday the finally confirmed the world’s worst kept secret that Calgary was getting the 2019 Grey Cup. And in what I can only assume was in honour of the stadium which will host the event, the Stampeders mascot “Quick Six” promptly crapped in front of the stage.

Stuff like that is why W.C. Fields always said never work with kids and animals, although it did give us this great tweet from Clare Hutchinson in CFL Communications. 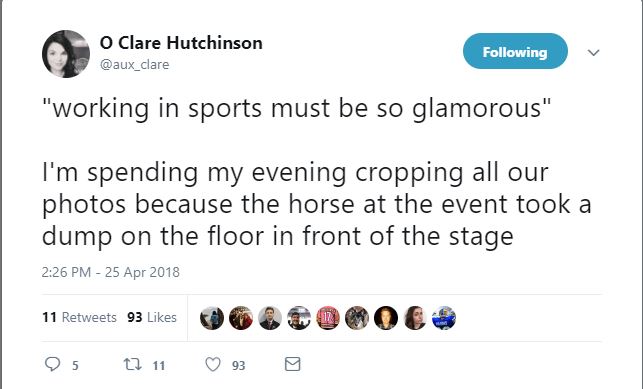 With the 2019 Grey Cup in Calgary you can be assured of 2 things:

1) The 10th “anniversary” of the 13th man will be a major “story”. It has already started and yes, I understand that is probably the worst way to ever lose a football game. But the fact that the game is in the same stadium a decade later has no bearing on the Riders or the league now.

The Riders have won a championship since then and while it will forever be etched in Rider Nation’s memory we have collectively moved forward and have embraced the 13th man title again.

But I am sure it will get clicks regardless.

2) With 2018 in Edmonton and 2019 in Calgary unless things are truly dire in Hamilton the Riders won’t be hosting a Grey Cup until 2021 at the earliest. 3 western Grey Cups in a row would be too much especially considering the league is also pushing CFL week as a destination event.