Quick Slants: Not My Bagg, Baby

Not my Bagg, Baby! 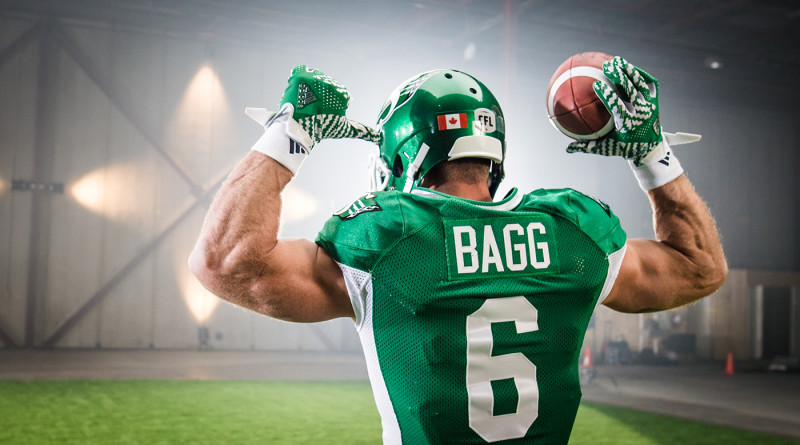 As the smoke-filled rumour winds started to swirl in the Queen City it became more and more obvious that Rob Bagg’s biceps (with special guest Rob Bagg) were going to be signing with the Riders.

I am going to admit I am less than thrilled about it.

Don’t get me wrong I love everything Rob Bagg stands for, he is the “Hang in there, baby” poster for the CFL.

He made the Riders as an undrafted free agent, went back to finish school, came back to the Riders was a part of the Canadian Air Force set of receivers. Came back after multiple injuries. 2014 All-star. Grey Cup Champion!

He was every cliché you love about sports. He was your blue-collar Canadian kid who grabbed his lunch pail and put in the hard work every day. If he played hockey Don Cherry would tell you about the “Good Canadian boy from Kingston, Ontario” every week.

But I really don’t see how this signing helps the team on the field immediately.

Last year Bagg ended the regular season with 1 TD and 339 yards in 17 games while Chad Owens played 3 games had 235 yards and a TD. Essentially, Bagg’s role on offense was the token Canadian receiver, not to be confused with Duron Carter who was the toking receiver.

I know what you are saying “But he’s one of the best blockers on the field.” Yes, that is a great skill to have, blocking is key in football to give the Running back, receiver or quarterback time to make a play develop. However, when your primary skill as a receiver is “great blocking” you are no longer a receiver as much as you are a skinny lineman that lines up way outside.

I get he’s going to be a veteran presence in the locker room, its obvious in the Carter cutting there is a lack of maturity and leadership in the locker room. But the fact you must bring “Dad” in midseason to get the kids in line, just looks bad on your roster building as a whole.

As mentioned before, he is a player the younger guys could look to and emulate but where are you going to put him. Are Devon Bailey and Josh Stanford expected to staple their asses to the bench for a good blocker?

Filling the void roster spot left by cutting Duron would have better been filled by a veteran American like Chad Owens or Bakari Grant. You know, Grant, the guy who was a 1000-yard receiver last year and led the league in yards after catch, who is a great community guy AND puts in the hard work as well.

Look, I stated when he got cut Bagg should be a Rider for life, so I am kind of happy that he might get to end his career on his own terms.

But who knows if that is even going to happen, this is still a Chris Jones’ team after all. There is a good chance fans are going to be relighting torches the minute Bagg gets cut again because “football is a young man’s game.”

But at the end of it all, this offense needs more than a hard-working Candian boy that is a great blocker. It is a start and it is great to see him back in green, but Bagg isn’t going to be the reason this team is going to turn it around.

Then again, what do I know?