Then there is really dumb like locking your car keys in your car.

Then there is unreasonably dumb like locking your keys in your vehicle while it is not parked.

Then there is BC Lion Odell Willis.

Odell was not happy that the high hit that he laid on Riders QB Zach Collaros hit him just as hard in the wallet.  The CFL fined Willis for the maximum amount available, which under the CBA is half a game cheque. The CFL rarely confirms financial figures but rumour is the amount would be around $2,000.

So, Odell apologized for his hit and then donated the remainder of his game cheque to concussion research… if you believe that you weren’t paying attention to the first bit of this piece.

Odell instead tweeted the following. 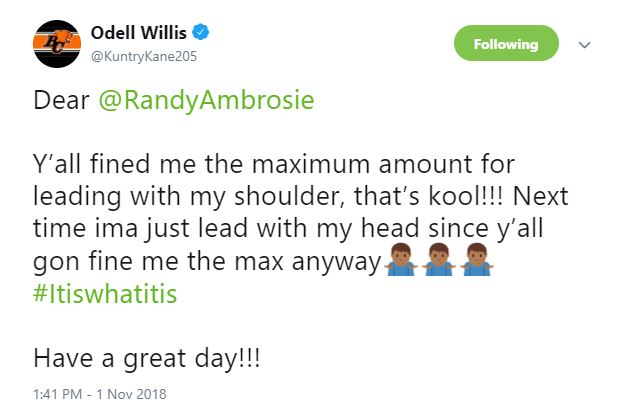 I can’t help but look at that tweet and think that Twitter doesn’t need an edit button as much as it needs a 20 second delay between “Tweet” and actually going live.  An “Abort” feature if you will.

Let’s break down this car wreck…

1)  He @-ed Commissioner Ambrosie which is either brave or stupid. But hey he’s going to get his point across.

2) He basically admits he is going to go out of his way to play dirty since he tried to do a clean hit and it wasn’t so why bother. Ya, that’s not going to get any extra attention for the remaining games this season including play offs.

4) “Have a great day”? You create that mess via tweet for everyone to see and you end it with “Have a great day”? Somehow, I don’t think this made the Commish’s day great.  Pretty sure a phone call or an email would probably have been more welcome if you wanted clarification than an open threat.

So, since this is live on Twitter, everyone kept their opinions to themselves…. If you believe that you obviously are new to this planet and I welcome you on behalf of the human race.

CFL Twitter responded in shock, awe, and trying to talk some sense into Odell to which he responded. 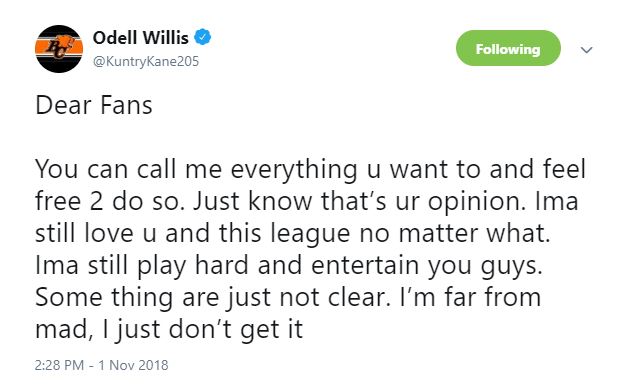 Once again if Odell had questions I am sure there is an email or a phone number available to the CFL office. Or better yet for clarification, he could talk to one of the BC Lions player reps for the CFLPA which include Emmanuel Arceneaux and… Odell Willis…sigh.

But obviously common sense or someone one in the Lions front office got to Odell because one hour and 9 minutes after he @-et the commissioner the first time he did it again for an apology. 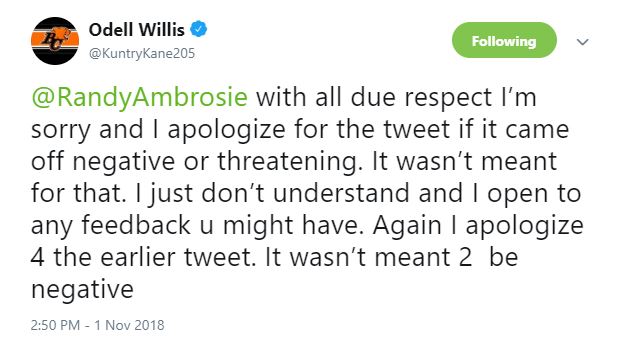 Odell wasn’t fine with the fine, so instead of talking to the CFLPA rep, aka himself, so he “rage, not rage” tweeted the commissioner. But in the end, he is sorry that his threat that he was going to target with his head came off as threatening, which will probably lead to another fine that he is not fine with.