Riders Beat Argos to Start Season: What We Learned

For the first time since 2014, the Saskatchewan Roughriders have won their opening game of the season, defeating the reigning Grey Cup Champion Toronto Argonauts 27-19 Friday night at Mosaic Stadium. The defense was incredible the entire night and the offense did enough to give the Riders a 1-0 record. There is still plenty for the team to work on, but let’s enjoy this win for now. Here’s some thoughts on the game and what we learned about the Riders.

We’ve talked ad nauseam about the 2018 Riders defense on the Piffles Podcast, and rightfully so. If you thought we were giddy about the Charleston Hughes and Willie Jefferson tandem before, now that we’ve seen it in action, you can tell why we absolutely loved this move. The team employs the 2 best rush ends in the CFL and it took them no time at all to get to Ricky Ray and establish their dominance.

Charleston Hughes had 3 sacks in the first half, including the 100th of his career. Not saying he’s Nostradamus, but he’s basically Nostradamus. 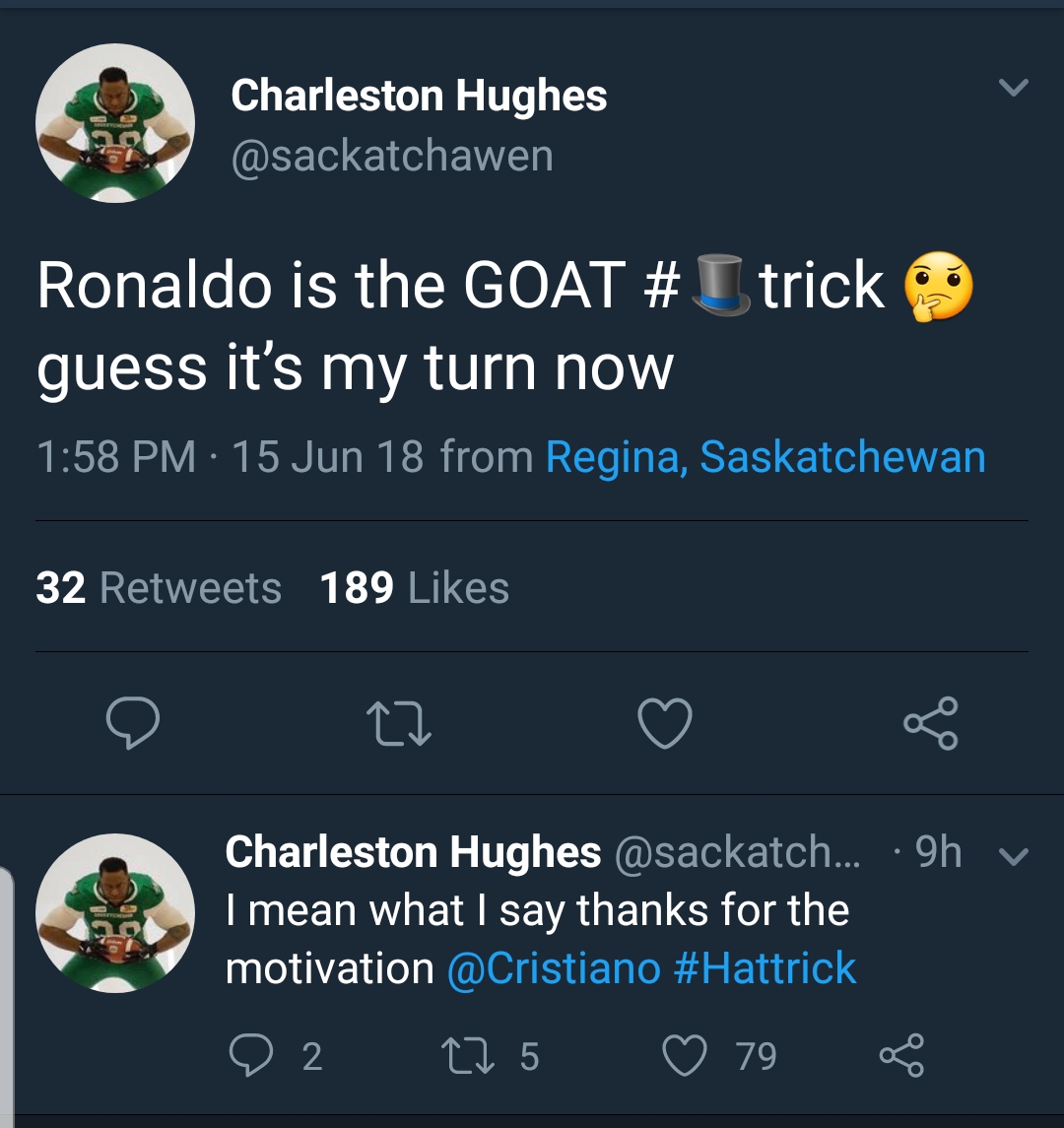 Superstar Linebacker in the Making

SAM Linebacker Derrick Moncreif established himself as a starter in this league last season after Otha Foster got hurt and this year he’s starting to show that he can be the best cover LB in the CFL. He was EVERYWHERE last night. Often, he’ll get tasked with covering the best slot receivers in the game and I have zero doubts about his ability to stop them. Dude can flat out ball, what a find for Chris Jones.

Special shout out to the other LBs Sam Eguavoen and Sam Hurl. Eguavoen seemed like he was in on every play and Hurl, while unspectacular, was solid. Hurl was in on 1st downs, while Cam Judge took his spot on 2nd downs (the rotation we are likely to see for the start of the season, anyway) and there were no glaring mistakes. Will Hurl be an All-Star? No, but he will be dependable, regardless of what Bomber fans have to say. Heck, even Tobi Antigha played MLB a few times last night. It’s a full blown rotation there and I’m okay with that.

Other than S.J. Green making a couple of spectacular catches (this is a recording), the secondary looked great. They are a ball hawking defense that will allow a few big plays, but we have nothing to worry about there. Newcomer Nick Marshall had that game-sealing pick 6 (no, that wasn’t PI against Gainey) and while I expect some growing pains with him, he was quite good Friday night. With guys like Gainey, Jovon Johnson (who was GREAT on Friday) and Crezdon Butler beside him to learn from, Marshall won’t take long to make a name for himself in the CFL.

The entire defense was absolutely dominant for 3+ quarters last night and I fully expect that kind of performance from them week in, week out and that’s exactly what the team needs as the offense takes time to gel. Speaking of the offense…

Zach Attack is (coming) Back?

Solid, but unspectacular, Zach Collaros did enough to help his team win. 18/25 for 203 yard and a TD. Nothing jumping off the stat sheet there, but the most important part was that as the game went on, he looked more comfortable and confident with his throws. It’ll take a couple of weeks for the offense to come together, but overall it was an alright debut for Collaros. As long as we don’t see anything other than the odd turnover, we have nothing to worry about. Will he return to his 2015 form? That remains to be seen, but for now, I’m just looking for continuity and continued growth in the offense.

I do have to credit the O-Line here as well. They started off shaky in the first quarter, but as the game moved on, they gave Collaros more time and generally, had a very good game. Not sure why Dariusz Bladek and Jarvis Harrison rotated at RG all night, but hey, if it works, it works.

You could tell that the offensive game plan was to run the ball, kill the clock and keep Ricky Ray off the field. Even when the run game wasn’t working, the Riders kept running it. I think this was done for a few reasons. One, they wanted to limit how much Collaros had to do. Until he gets more confident with the offense, it was a good safety valve to just hand it off to Jerome Messam and let him wear down the D-line and kill that clock. Two, to mask the O-Line deficiencies. It’s easier for the O-Line to run the ball and attack the D-Line, than to pass protect and react to what the D-Line is doing. I’m still not sold on the O-Line as a whole, and even running the ball, they were suspect at times (Messam only had a 3.4 yard average), but they showed up when they needed to.

It may not be flashy, but for now, this is the offense we will see. 25 points will be plenty enough for the offense to win games early on in the season.

This team is a very good team. Think the 2014 team pre-Durant injury. The defense will carry the load, while the offense will do enough to win. I give them a B+ this week, which is a lot more than we can say about season openers in the past. Still some minor concerns (mostly O-Line), but they’ll come around. Bottom line, the Riders are 1-0. They don’t ask how, just how many.

The Riders go to Ottawa next week, and we will preview that game on the Piffles Podcast (out Tuesday evening). You will hear from new Riders receiver Jordan Williams-Lambert and Ottawa REDBLACKS QB Trevor Harris on the show as well, so don’t miss it!