The Riders went into BC and got a rare late night win with a 3rd and 1 stop to seal the game to put their record to 5-4. The win puts the Riders striking distance of a home playoff game as they enter the second half of the season.

Thoughts From The Game

·         Raise your hand if you had Nick Marshall leading the Riders in touchdowns. Put your hands down you liars! With 2 interceptions TDs and 2 short yardage TDs on offence, Marshall leads the team with 4 TDs, behind him are Naaman Roosevelt and Marcus Thigpen each with 3.

·         It is going to be difficult for the Riders to pick their Most Outstanding Rookie nominee with Marshall, Jordan Williams-Lambert, and Shaq Evans playing so well. Maybe football is a young man’s game after all.

·         Speaking of which Rob Bagg (and his biceps) were a healthy scratch again this week. I guarantee if and win he gets into a game Rider Nation will collectively lose their minds.

·         Charleston Hughes is running away with the sack title and is the hands-down favourite for Most Outstanding Defensive Player. If this is what Calgary thought was him slowing down, I’ll take it. Hughes got his league-leading 12th sack last night and is on pace to break Bobby Jurasin’s 22 sack total.

·         In case you were wondering the next closest to Hughes sack numbers is a 5-way tie with 5 sacks. Amazingly, the Riders are second in team sacks with 23, the Eskimos have 24.

·         Shout out to the defence for keeping the Lions to field goals early in the game when the Lions had some great field position.

·         HOWEVER, the final minutes of the game relying on the 3-man rush almost allowed the Lions to come back.  Playing prevent defence usually only prevents you from winning.

·         THAT SAID, a great surge from the defence on the 3rd and 1 to win the game. The Lions weren’t even close, even with a spot that looked pretty favourable.

·         Brett Lauther missed his first in a long time, but that wasn’t the story you could hear the collective gasp from RiderNation when he limped off the field on his last kick. Lauther clarified on twitter after the game that it was only a cramp. 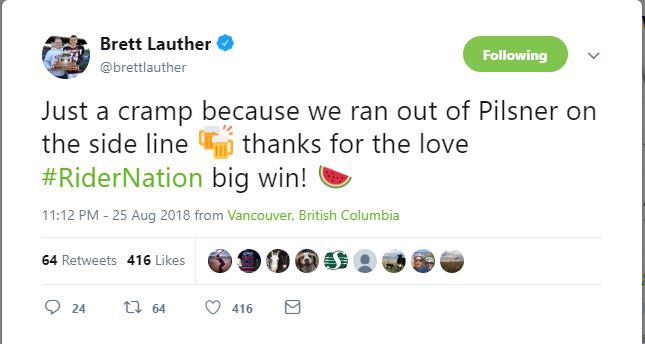 ·         Speaking of collective gasps, Rider fans were on pins and needles when Brendan Labatte limped off the field. Fortunately, he rejoined the game after a few plays, but the offensive line still looked good with Josiah St. John in spot duty. That said, I don’t really want to see this line without Labatte in it too much, he is our best O-lineman by far.

·         Zach Collaros was held to just 215 yards, most of which came in the first half. Both teams seemed to crank up the defence in the second half which led to only 7 points being scored final 2 quarters for both teams.

·         Welcome to the offence Kyran Moore, he may only have had a few touches last night but with the packages they used him in and his stature (or lack thereof) it reminded me of how Weston Dressler was used early in his career.

·         Christion Jones is the most dynamic returner the Riders have had since Corey Holmes. This is a recording. At a moment’s notice, Jones can flip the field on the opposition. Every time he touches the ball there is a good chance he could break one to the house. And that is a great feeling to have.

The Riders now have won 2 straight against Western opponents and are heading into 2 very important games against Winnipeg. It’s not like the Labour Day Classic or Banjo Bowl need any more hype to them but considering how tight the West is and the playoff implications the games are going to be absolutely insane.

Be sure to check out this week’s Piffles Podcast where we will break down this game and look ahead to what will be a crazy Labour Day Classic.