There’s been a few things that I’ve wanted to write about lately that are way more prevalent than this, but since it’s such a gorgeous day outside, I want to get away from the negatives of there not being a 2020 season, how Randy Ambrosie is embarrassing the CFL right now and just Covid-19 in general.

Let’s actually talk about football and take a look at the 2020/2021(?) team that Riders General Manager Jeremy O’Day has built.

I absolutely love what O’Day (and Chris Jones) has done with this roster over the last couple of years. They’ve been able to find a good balance of guys that can win now and win in the future.

Let’s start off with the Offence. (We’ll look at the Defence next week). For the first time in a few years, it may not be as offensive to the fans as it has been… It’ll be a different type of offensive. Jason Maas was brought in to lead the way and replace Stephen McAdoo, which might be the best hire this team has had in a handful of years. 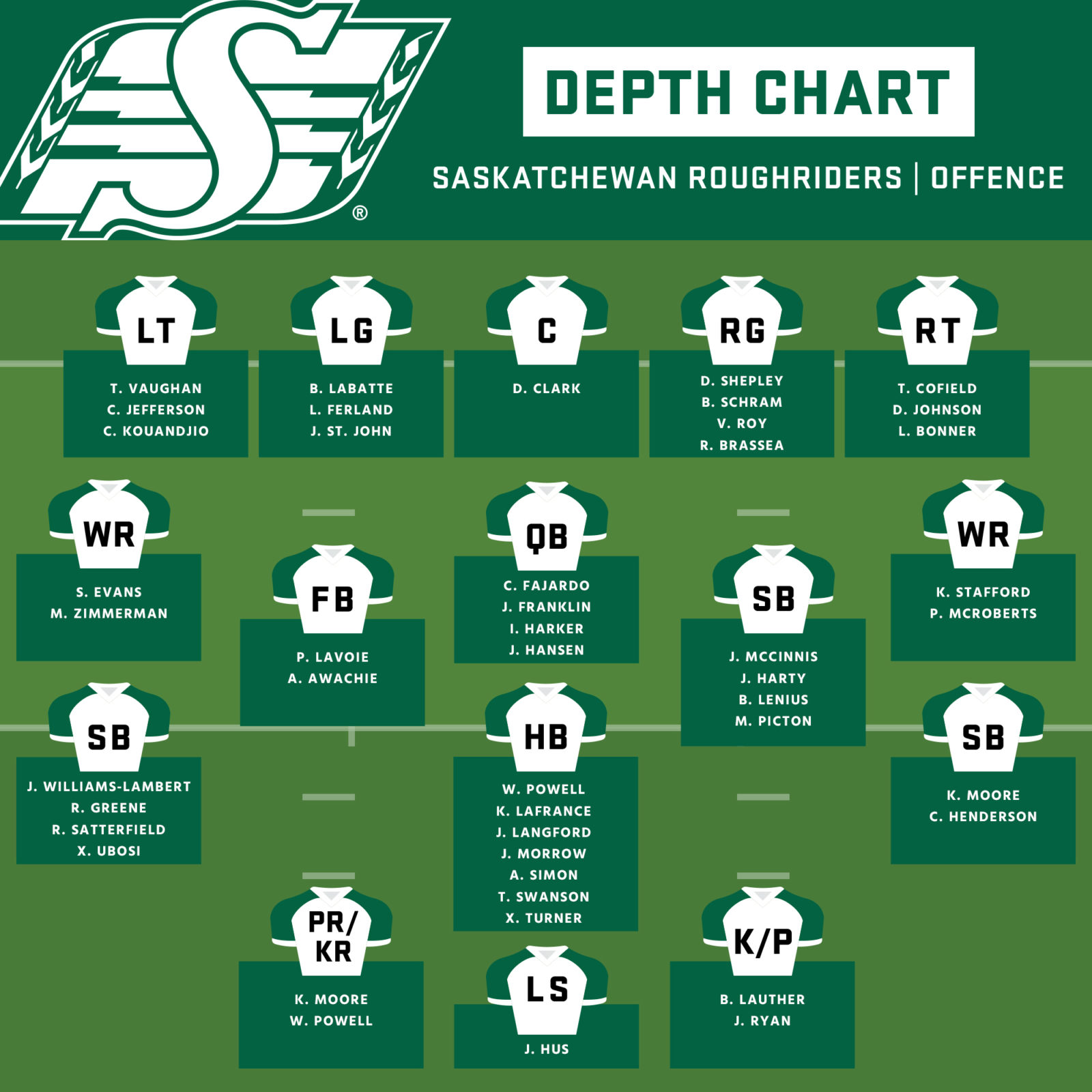 That’s a very solid starting O-Line. For now. Vaughn (come on cfl.ca… at least spell the dude’s last name right…) and Cofield are going to be great bookends going forward. No concerns there. The concern I have with the O-Line is that they aren’t very deep and it’s filled with guys that won’t be around much longer.

LaBatte –  with his age and injury history lately… he’s on his last legs of his career. He’s still a beast, but let’s be honest, it’s nearing the end for him.

Clark – Honestly, until his arm injury a few seasons ago, I’ve been quite hard on Clark. I thought he’s always been masked by great guards around him, but since that injury, he’s been one of the best Centers in the CFL. I have no idea what changed in him, but he’s been great the last couple of years. That said, he’s getting up there in age too and his longevity is going to be a concern. Drafting Mattland Riley to likely be his replacement in a year or two was a great move by O’Day.

Shepley – The guy is a stud. But does he actually want to be in Saskatchewan? I don’t think he does. No fault in him for wanting to try the NFL or to be closer to home or going elsewhere for a big payday, I applaud that. But it’s exactly why I don’t think we see him back for his next contract.

Behind these guys, there is a lot to be desired. Josiah St. John back? Woof. We had 3 years of his lack of motivation and poor play. If he sees action again for the Riders, I’m going to be quite disappointed in the scouting department that they couldn’t find anyone better. Logan Ferland is going to be a very good guard in the CFL. He’s still super raw though and does need more time to develop. That only really leaves Braden Schram left. At least he’s played before. He goes into this next season (whenever that may be) as the 6th O-Lineman. I think he’ll be quite good there. He can fill an interior spot if one of the starters go down, but if there are multiple injuries, this team is looking THIN at O-Line and that worries me.

It’s hard not to be excited by Cody Fajardo and what he did in 2019. It looks like the Riders finally have their franchise QB they’ve been searching for since mid-2014 when Darian Durant first got injured. Cody was exactly what the team needed last year at exactly the right time and now he’s got to grow and get better. My concern is this… is he just a flash in the pan?

By that I mean, when you look at his numbers, they were good, but not great by any means. 2019 was the weirdest year for QBs in CFL history and I can promise you, all 9 week one starters won’t get injured like that again. Was Cody actually very good, or was the league’s QB play last year at an all time low because of injuries that Cody looked better than he may have been? Cody is absolutely the best QB the Riders have had over the last 5 or so years, but before I say he’s the saviour of this team, I’d like to see one more year from him. I’m quite excited to see what he can do in a Jason Maas offence. This will REALLY show us what he can do, unlike that Stephen McAdoo offensive offence.

That brings me to James Franklin. GREAT signing by O’Day. The way Fajardo plays, you can almost expect him to miss some time. Franklin has seen significant playing time in the league and has played under Maas before. I don’t expect Franklin to ever beat Fajardo out of the job, but he is a very capable backup if things go wrong.

Isaac Harker – My neighbour! He’s a very nice, young man and has the potential to be a good CFL QB. Would I want him starting a playoff game? No. Harkermania should not be running wild in a do or die game. Not yet. Another year of development under a great OC like Maas will do wonders for him. The Riders QB situation is the best it’s been in… 30 years? I really like what they have here.

William Powell is still a top 2 running back in the league. Absolutely no problems here.

I LOVE the addition of Jeremy Langford and not just because I had him stashed on my roster (I think I even started him a couple of times too) in NFL Fantasy. He is going to be a guy that pushes Powell and honestly, could become the long-term option going forward for this team.

Morrow (and the rest of the American backups) are just unknowns and it’s quite likely none of them make the final roster. Flip a coin, maybe one of them stays on the PR.

LaFrance and Simon… both likely make the roster, both as special teamers. LaFrance can come in to spell off Powell in a pinch, but that’s about it. Gotta have them around for depth and there’s no concern here.

Shaq was great last year. He turned into the #1 option for the team and showed that he can be a great deep threat and is a game changer. My only question is if he’s ready to be the undisputed leader yet. Can he be that guy that will go over the middle and get you 11 yards on 3rd and 10 to keep a game alive? He’ll be trusted to do so, it’ll be interesting to see how he responds.

Williams-Lambert… we’ve seen this happen time and time again. A receiver goes to the NFL, gets cut and isn’t the player that he was before when he comes back to the CFL. I’m not worried about him going forward, he’s a very solid #2/3 option for the team.

Kenny Stafford has kind of been forgotten about in this receiving group. He’ll likely be pushed by Paul McRoberts (last year’s training camp standout) for the last American starting spot and this is the battle I’m most intrigued about. Do they go with the veteran or the young option? There is no established vet on this team anymore now that Roosevelt is an Alouette, so maybe that’s his ticket to making the final roster.

Justin McInnis didn’t get a lot of reps last year, but he has a ton of promise for the Canadian spot.  Between McInnis, Brayden Lenius, (potentially) Jake Harty, Patrick Lavoie (although they have him listed as a fullback) and 2020 draft pick Kian Schaffer-Baker, the team is in good hands for the future in this spot. They have size and speed, they just need the reps.

It’s quite the dynamic group of receivers, but it’s a very young group. I’m excited about what they can do, but the missing veteran presence come playoff time may be a bigger hole in this team than we think.

Overall, this offence stacks up very well and can only be made better by Jason Maas. There aren’t any glaring holes by any means, just a few concerns if injuries arise. O’Day has done a great job of keeping and signing very good players and I have no doubt that this offence will be near the top of the CFL for yards and points next season. The potential is there for this to be a dangerous group and keep them in the Grey Cup conversation for many years. Let’s just hope with all the bailout talk, that we have the chance to see this happen.