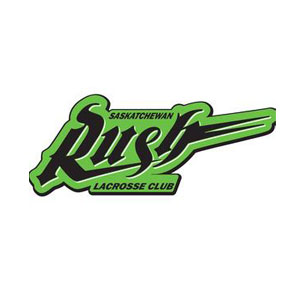 It only took a year and a half, but I finally made the trek up Highway 11 to Saskatoon to check out a Saskatchewan Rush game. I wasn’t sure what to expect, so I tempered my excitement just a tad. I had watched a few games, and listened to a few broadcasts on the radio, but this was my first venture into live NLL Lacrosse. It certainly will not be my last.

After collecting my media credentials for the season, I headed down to the media lounge and got prepared for the game. Was lucky enough to chat with John Fraser, the Rush’s play by play radio announcer, before the game. He invited me to sit up in the play by play booth high above the field, which I gladly accepted. I must say, the view from the Gondola near the top of the Sasktel Centre is impressive.

Because I am not all that familiar, yet, with the game of Lacrosse, I will not get in to the actual game all that much. I’d much rather talk to you about the atmosphere at Sasktel Centre leading up to, during, and after the game on Saturday night.

Before the game had even begun, you could feel the excitement in the air. Fans had begun lining up to get in 2 hours before the first faceoff, anxiously awaiting their chance to get in the building. Some of these fans were likely sitting in the Coop General admission area, but most just wanted to get in the building and get amped up ahead of the game. There was plenty of talk about the Rush and their chances against the 2nd place Colorado Mammoth and their outstanding goaltender Dillon Ward. I will say this – Ward absolutely lived up to this potential, as he was named first star in a losing effort.

As the clock counted down towards the start of the game, the excitement really started to build. The Sasktel Centre was electric and the fans were ready to go. When it came time to welcome the teams, you couldn’t hear anything outside of the cheers of Rush Nation.

This brings me to one point about the Rush that I absolutely love. They work very hard to get their fans involved. This game happened to be fan appreciation day, so they had season ticket holders run out alongside the players as they were announced. They also had a promotion that allows a fan to sit in the home penalty box for a period, which looked like a lot of fun, and would be an amazing experience/view.

Prior to the game, there was a Championship ring presentation for former Rush member, Zach Greer. Zach was traded in the offseason, but judging from the cheers he got, he was most definitely not forgotten. The cheers he got reminded me very much of the standing ovation that Kerry Joseph got when he returned with Toronto in 2008. Was definitely an exciting moment before the game.

As first faceoff neared, you were lucky if you could hear yourself think. I gained a lot of respect for people like John Fraser and Casey Guerin, as I watched them work play by play with 15,000 fans screaming their heads off. There was no glass between them and the noise. I was a mere 2 feet away, and I couldn’t hear a darn thing they were saying. But you could see the excitement on their faces as they described the action. When the Rush took a late 7-6 lead, you could tell that John is a fan first and a broadcaster second as he leapt out of his chair to celebrate the goal. On a side note, I am very, very impressed with their ability to seamlessly work over 20 Matthew Good song titles into their broadcast. Some were easy, like “The War is Over” or “Enjoy the Silence”. Others were amazing, including “House of Smoke and Mirrors”, “Haven’t Slept in Years” and “Strange Days”. In a noisy atmosphere like the Sasktel Centre, to be able to do play by play without issue and manage to fit in references like these, was inspiring to watch. I appreciate the offer to join them up in the booth.

To experience a Saskatchewan Rush game, is like experiencing a labour day Roughrider game, but imagine that excitement and noise level going, non-stop for several hours. The fans in the arena lived for every moment of action. They nearly blew the roof of the building when the Rush took a 4-0 lead, but this was a game of goal streaks. They somehow got louder as the Mammoth stormed back to tie the game in the 2nd. In a game of back and forth (4-0 Rush, 4-4, 5-4 Rush, 6-5 Mammoth, 8-6 Rush, 8-7 final) the fans never gave up. They never stopped cheering. They rose in unison after every goal, fans beating their chest like Matthew Mcconaughey in Wolf of Wall Street. The noise was off the charts in the play by play booth, I can’t imagine how loud it was down at field level.

When the Rush came to Saskatchewan, I wondered how quickly the fans would take to the team, and if a sport like Lacrosse would succeed in Saskatoon. In a province starving for professional sports, and even more so lately, starving for wins, having the championship winning Rush come to town was the perfect storm for what was to come. The fans immediately took to the game, and have seemingly increased their passion with a 2016 title of their own. What surprised me the most, upon walking in, was the merchandise that seemed to fill the arena. Rush jerseys (at $120 a piece) were every where. If it wasn’t jerseys, there were hats and shirts everywhere. In a province that always has the Roughriders as number 1 in the summer, the Rush are quickly making their mark as the team to watch throughout the fall/winter. To truly understand the Rush, one has to attend a game. To truly understand the passion and love that Saskatchewan has for this team in such a short time, you have to spend a night surrounded by a very loud and loyal fanbase. 15,000 fans walked through the doors on Saturday night, including 3 new fans in myself, my wife, and our friend Rachelle. All 3 of us walked out absolutely in love with this team and the sport of Lacrosse. Here’s a little take from my wife (@Krystal_Safinuk on twitter).

I do not enjoy most sports. Anything I do sports wise is generally to spend time or support my husband; however, I can usually be talked into attending a live game, and having a good time. I expected this would be the case at the Rush game. I was not prepared for the experience I had, nor was I disappointed.

I walked in with zero knowledge of lacrosse. My friend and I were very glad to be sitting in front of a father who seemed to be taking his son to his first game and unknowingly answered most of our novice questions throughout the evening. The atmosphere was electric. As the crowd started to filter in it began to feel more like a party than a game. Once the game started it was impossible not to watch and be drawn in. The reaction to the Rush’s every goal was nothing short of explosive. Every person was on their feet. Our amazement quickly changed to bewilderment as nearly every person began beating their chest to the music. The game moved incredibly fast, but was easy to keep up with for a non-sports fan.

I walked away from the game buzzing. I felt passionate about this team and wanted to come back, but as a painted up fan – and in that moment I understood why Steve is so passionate about sports and the high he must experience. I have a feeling he will make a sports fan out of me yet.

Lacrosse as an exciting, fast-paced sport that needs to be seen live. If you haven’t been yet, get a ticket to a game, and check it out. Sports fan or not, you will likely have a great time, and the price is certainly good for professional sports. Tickets range from $25 to $60 and every seat has a great vantage point of the action on the floor.