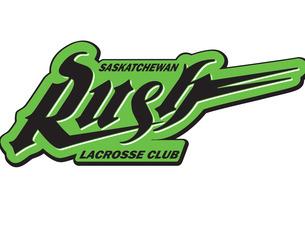 For those who haven’t followed along, this season has seen me go from an interested observer, to an all-out fan of the Saskatchewan Rush. I have followed every game on twitter/Rush app since I made my first trip out to SaskTel Centre earlier this year. Casey Guerin, Rush Colour Analyst, said it best when I asked him what he would say to someone who has never been to a Rush game.

“It’s unlike any sporting event you’ve ever been to. Give it a try once, and I’ll bet you’ll be hooked.”

He was right. All it took, for me, was one trip out to Saskatoon, and I’m hooked. I’m considering season tickets for the 2018 season, along with planning on putting together a fan bus up from Regina next season. I described the craziness in a blog article earlier this year, and must have done a decent enough jobs as the team put that article on their website, and it remains there today.

This brings us to last Saturday evening. While I regularly follow along with games, I have yet to purchase a NLL TV subscription, so the extent of my away game watching has been spent following along with fan comments on Twitter, and watching the score on the app. That changed on Saturday night, as the Saskatchewan Rush game was the NLL game of the week that would be broadcast live on Twitter.

On March 17th, the National Lacrosse League announced that it would be following in the footsteps of other major professional sports leagues (NFL, MLB, NHL, and PGA for starters) and broadcasting games on the Social Media app Twitter. The NLL has signed a 2 year deal with Twitter to broadcast the NLL game of the week, playoffs and Champion’s Cup games, as well as highlights. These streams will be available in both Canada and the United States.

So, there I sat Saturday night, Twitter loaded and Chromecast setup on the TV, ready to expect a choppy web stream. Little did I know; I was in for a shock. The stream felt as if I was watching the game on TV, with very little “chop” and no sound issues while I watched. For the first time, all season, I could follow along goal for goal live for an out of town game. (NB: This was the second Saskatchewan Rush game, but I was not able to watch the first).

I asked a couple of fans of the Rush what they thought about the broadcast and the decision to broadcast games on NLL:

@Saskie35 (Sharon Davies): “I think the collaboration between NLL & Twitter is a great idea and can only serve to grow the game and attract more viewers, especially those of us who are addicted to social media. The quality of the broadcast was quite good compared to most nights on NLL.  There were only a couple brief flickers where the feed was lost. Compared to NLL broadcast where almost every broadcast that I’ve watched has had frequent blips and poor feed quality, I think Twitter may be onto something.  I would watch another broadcast on Twitter.”

@JShanny14: “I’ve enjoyed the collaboration. It helps people who may not be able to afford the NLL subscription watch a game or two of their favourite team or even all of them if you follow it (NLL) closely. I had no problems with the twitter broadcast. That’s actually the second Rush game I’ve watched on twitter and I have no complaints. I’d definitely watch another one on there.”

@Guerinteed (Rush Colour Analyst, Casey Guerin): The game has never been readily available to as many people as it is on Twitter. The landscape of sports is changing and it’s moving in a digital direction and social media is such a great avenue for us to get our game out there. I think it (Twitter) adds excitement knowing not only are you broadcasting to the true fans, but you’re showcasing to casual sports fans or people who are just discovering us.”

Casey said it perfectly. We are entering a digital age in sports. Leagues are looking at Social Media broadcasting to add to their current viewership, and rightfully so. There are over 100 million users logging in daily to Twitter, and almost 2 billion active Facebook users. Until last year, this was a mostly untapped market in the world of sports broadcasting, but not any longer. Twitter, Amazon, Facebook and Google/YouTube are all trying to push their way in to the market. All 4 were negotiating with the NFL for the rights to this seasons streaming deal, recently won by Amazon. Last season, Twitter paid $10 million to stream 10 games. This season, Amazon has upped that to $50 million. After the NFL announced that they were moving to Amazon, Twitter came back and announced a deal to broadcast weekly games for MLB. The NHL streams a weekly out of market game to US twitter users. Wimbledon was live streaming matches in 2016. Even NCAA has streaming deals with Twitter.

Noticeably absent from this list is the CFL. I realize TSN has exclusive rights to broadcasts, and this is most likely preventing the CFL from entering the market. While the broadcasting deal with TSN was a huge boon for the CFL ($40 million per season), it’s hard to disagree they are missing out on a huge growth opportunity. One must wonder if it will be too late to jump in to the water when their current contract with Bell/TSN expires after 2018.

Back to the NLL and Rush; I must applaud their move to enter the Twitter market. While they have long been involved in a strong Social Media presence, the new Twitter streaming deal will only do great things for the National Lacrosse League. For a new fan to the sport, it is easier to get excited watching the game if you can follow along with fans tweeting about the game as it goes.  For leagues to continue to grow, they need to constantly find new ways to reach and excite the casual fan. Twitter is full of casual sports fans that may just need the same thing I did a few months back. That first glimpse of a live game and a crazy crowd. Those casual fans are the key to a strong future for professional sports.