Saturday, July 14, 2012 started out as just a normal Saskatchewan Roughrider game day. We all get ready to cheer our team on to victory over the BC Lions, face paint goes on, jerseys are brought out of the closet, your favourite beverage is put on ice and we all make the trek to Taylor Field (old Mosaic Stadium, but it’ll ALWAYS be Taylor Field to me). Then we get a special pre-game announcement from Regina Mayor Pat Fiacco that our football prayers have been answer. We will be breaking ground on a new stadium!! We get excited about things to come and what’s going into the new stadium.

It doesn’t really hit me until 2016 when we get to the first preseason game, that we only have 10 games left in the old stadium before Mosaic Stadium opens. This was around the time we started doing the Piffles Podcast, so we had a segment on our show called Mosaic Memories where we remember our best moments at Taylor Field. Oh man, this is it, we are leaving this building behind and getting a world class facility to carry on the Rider tradition! I start to remember the best times we had at Taylor Field… my first game with my Mom, sitting in the family fun zone for a preseason game in the early 90s, getting my first season tickets in 2003 over in section 9, my first Grey Cup experience in 2003 when Edmonton beat Montreal, the Thunder Bowl in August of 07, the first home playoff game in 19 years back in 2007 and of course the biggest game in Rider history, Grey Cup 101 where the Riders won the Grey Cup at home against Hamilton. I could go on and on about the memories there, but there are just so many.

Saturday, October 29, 2016. The final game at Taylor Field against the BC Lions. 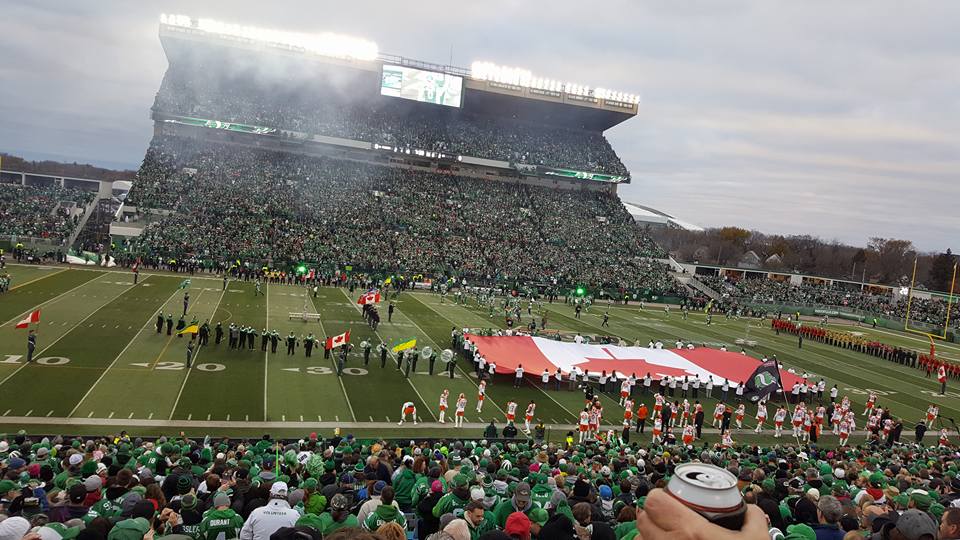 In a lost season, this game meant nothing to the team in the standings, but it meant everything to the fans. This was the last time we would all gather for a game in the old building. The game left nothing to be desired as the Lions dominated the Riders 24-6, which, looking back on it, is kind of fitting for that stadium. Tons of excitement only to be disappointed. Thank goodness that was the last game and the post game video and on field celebration kept all the fans around, because it would have been sad to see that place clear out before the game was over. But again, it wasn’t about the game. It was about celebrating the history of the stadium with our season ticket family, people we only see 10 times a year but have become some of our best friends. Pictures are taken, hugs are given and tears are cried as we see the farewell video and clear out one final time. Yep, I cried. The video was touching and it all hit me in one moment. This was it. Time to say goodbye. 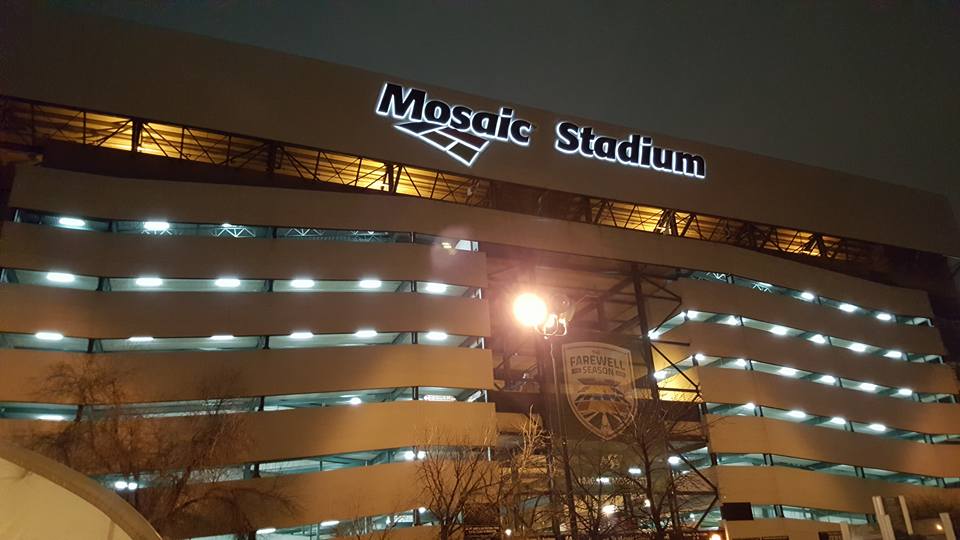 We all move into new Mosaic Stadium and are wowed by the stadium, the ammenities and what a great building it is. We all find our new season seats and while the seats are a million times better than Taylor Field benches, they’re not the same. They aren’t home. I love the new stadium and I love my seats, but they aren’t my Section 27 season ticket benches. Luckily, the City of Regina put up literally everything from Taylor Field to auction. I was lucky enough to win the bid on my row of seats and was able to take my piece of Taylor Field home.

Monday, August 21, 2017. My birthday. Happy Birthday Alex!! Time to go get your section 27 seats out of Taylor Field. So we get some help and begin to remove our benches. As we walk into the stadium, it’s nothing more than a construction site.The turf is gone, people have removed their benches, it’s really just a dump.

Time to get to work with the removal of the seats. Since it was my birthday, I took advantage of the situation and made Amy do some work.

2 hours of taking apart the seats later, we are exhausted. We load up the truck and take one final walk down memory lane as we walk out of the stadium. It didn’t hit me then, because all I saw was this construction site, but it hits me now. I miss this place. It’s where I learned to love football. Even when the demolition is complete and the site becomes housing, parking lots or whatever it turns into, Taylor Field will always be a big part of my life. And I’m glad I got to take it home with me. Taylor Field may be gone soon, but Section 27, Row 34, Seat 7 will live on with me forever. Thanks for the memories!