The Rush Hulk Banned by the Roughnecks/Saddledome

Last night, Kelvin Ooms, better known as The Rush Hulk, made the shocking announcement that he would not be allowed in to the Saddledome for Saturday night’s game in his regular gameday attire. In the announcement on Facebook, The Hulk stated that he was told that being recognized as a team mascot, official or unofficial, could lead to altercations in the arena. For his own safety, they say that he will be turned away at the door should he show up to Saturday night’s game as The Hulk.

If this was just one guy going out to Calgary, it wouldn’t be much of a story, but what’s shocking about this to me is that they are banning the guy who is planning a bus trip that is brining over 250 Rush fans to the Saddledome to spend their money. 4 sold out busses are making the trek from Saskatoon to Calgary this weekend because Kelvin Ooms put this trip together for a second time.

(the entirety of his announcement can be found here:

If they wanted to ban Mr. Ooms from showing up, there are certainly far better ways to do so without trying to make it seem like they were concerned about his well-being. They could have said “the outfit is too cumbersome, and could allow him to bring in items prohibited from the arena during games” or “We simply do not want a mascot of the opposition, official or unofficial at the game to pump up visiting fans as it would affect our home field advantage”.

Instead, they pinned potential issues on Mr. Ooms potential to slip on stairs, even though he did the Calgary Fire Fighter Stair Climb Challenge for the past 2 years while wearing fire fighting bunk gear including SCBH equipment, and is a firefighter himself. They also pinned potential issues on Roughneck fans saying “fans get intense and home fans get protective when you’ve got mascots from visiting teams”. Not a good look to pin the potential for problems on people from your own fan base.

I could certainly understand their reasoning if there were issues last season when the Hulk planned his trip to Calgary in April, but according to Mr. Ooms, that trip went off without issues. Additionally, several Roughnecks fans reached out to him after the announcement last night: 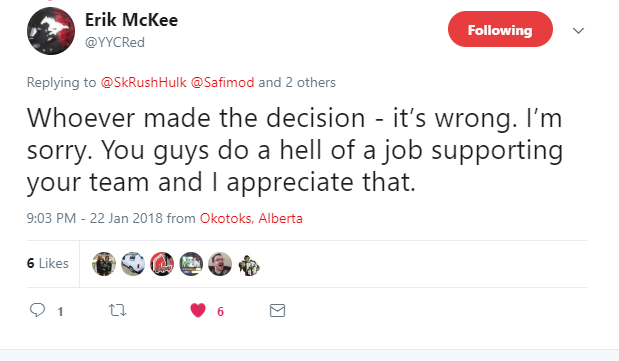 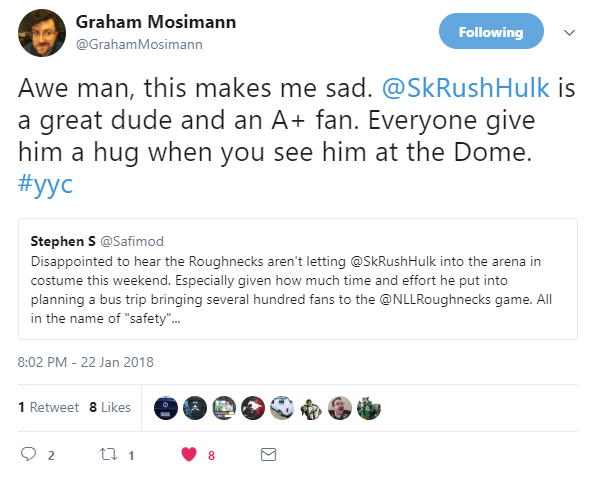 This is not the first time a mascot from Saskatchewan has been banned from a Calgary stadium. In 2006, the Calgary Stampeders banned Gainer the Gopher, the Roughriders mascot, from the sidelines during a CFL playoff game. This is the same city who, only months ago, was complaining that they were not allowed to bring their touchdown horse onto the sidelines for the CFL Grey Cup – the irony of that is not lost on me.

This ban has led Mr. Ooms to look elsewhere for the next Hulk Rush Road Trip, and I certainly don’t blame him. I had the chance to chat with Kelvin about how this came about.

Piffles Podcast: How did you hear about their decision to ban your Hulk attire from the game?

Kelvin: From a Calgary Roughnecks fan who follows me on twitter and knows the Roughnecks management.

PP: So the team themselves never let you know? You had to learn this from a fan?

Kelvin: Yes, that’s right. I heard of it, then contacted the Rush office staff to see if they could look into it for me. The last thing I wanted was to show up and be turned away at the door. I thought they (the Rush) had contacts that could look into it, they did and then I was informed.

PP: Prior to this, had there been any indication that this was happening? Were there any issues last year that would lead people to believe this was necessary?

Kelvin: Absolutely none at all. Last year’s road trip on April 29th to Calgary was awesome. I took more photos with Calgary fans that I sometimes do here at Sasktel Centre home games.

PP: About the trip itself, how many people do you have coming to the game?

Kelvin: Four full busses, plus we sold roughly 70-80 tickets to fans traveling on their own.

PP: Could you tell me a little more about the donation you’re making from this trip?

Kelvin: $10.00 from every seat sold on the road trip is being donated to Kidsport Saskatchewan. There will be a donation for over $2000 at the next Rush Home game on February 4th.

PP: Anything else you want to say to the Roughnecks/Saddledome regarding this decision?

Kelvin:  Both the Roughnecks and Rush fans and I think it’s ridiculous. You’ve probably been following all the tweets and comments on Twitter and Facebook. Their own fans are embarrassed by their decision. Mr. Mike Moore was quoted in the Calgary Herald commenting: “Moore said there’s a risk Ooms could bump into other fans while dancing or cheering in costume and might provoke unhappy responses. He doesn’t know the building. What if he does fall down or if he steps on somebody. Fans get intense and home fans get protective when you’ve got mascots from visiting teams”

This is the lamest excuse given that night will be Star Wars theme night, and when their own fans will be dressed in costumes, drinking and could pose the exact same risk to other fans they are around (No disrespect to any Roughneck fans – they are awesome fans). I do not venture into other areas of the arena – I stick to the Rush section and stay with the fans and in concourse areas. That’s exactly what I did last year with absolutely no incident. This is just a poor excuse to try and bring down our fan base – but it won’t work – with or without the Hulk, fans will be there and if they thought we were going to be loud before – just wait until Saturday! They don’t know what they started.

(Piffles Podcast has reached out to Mike Moore, VP of the Roughnecks, for comment but they have not commented at this time)