Trunk Ya, Kevin Glenn is a Hall of Famer

Can we talk about the Elephant in the room for a minute?

When Roughriders QB Kevin Glenn was asked about if he should be a hall of famer after being only the 7th player to surpass 50,000 yards, he responded bluntly, “Is an elephant heavy?”

I’m no amateur zoologist, but that’s why I have access to the internet and google…. 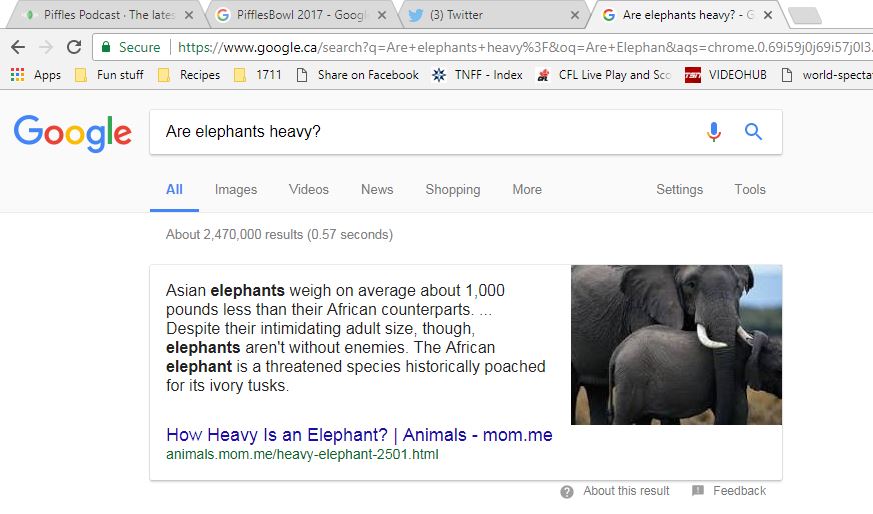 So apparently it is, so there you have it Kevin Glenn should be in the Canadian Football Hall of Fame.

Now, as long as there aren’t any ridiculous statements to the contrary this could be a short piece… Let’s check Twitter…

Oh, Crap… Where to begin?

“He throws too many interceptions…”

Glenn has the amazing ability to throw a pick at the most inopportune time, however, he shakes it off and goes back to work the very next series.

I had someone point out that Glenn is top 10 interceptions thrown all time. I admit that’s not a great list to be on, till you look at the list. 8 of the 10 are already in the Hall of Fame, and the other guy who isn’t yet is Henry Burris and you know he will be in the Hall soon enough.

While I will admit his below .500 win percentage doesn’t look good, this is the CFL most QBs are around the .500 mark for their career if they have played long enough.

Football is supposedly the ultimate team game to hang all the losses on the Quarterback, while great for commentary and debate truly isn’t fair. While the QB handles the ball a lot and runs the offense, football is a 3-phase game that can be lost when he is not even on the field.

There is so much that can go wrong in a football game that one player shouldn’t be held responsible for each loss.

It is not even the losses that are apparently hindering Glenn’s HOF nod, it is what he hasn’t won, aka the Grey Cup?

It does seem mathematically improbable that a man in his 16th season, who has been a member of 8 of 9 CFL teams (at least on paper) hasn’t won a Grey Cup even as a backup. But Kevin Glenn is that walking statistic.

When Glenn wasn’t winning Grey Cups in Winnipeg, his favourite target was Milt Stegall. Guess who currently is in the CFHOF and who also didn’t win a ring his entire career? Milt “Freaking” Stegall.

Dan Marino, Ernie Banks, Pavel Bure, Charles Barkley, Jim Kelly, Patrick Ewing, etc. No one would dare say they aren’t hall of famers in their respective sports because they didn’t have a piece of jewelry.

Why is Kevin Glenn any different?

Glenn has been called the “Rodney Dangerfield of the CFL” because he get’s no respect.

No respect from the fans.

No respect from a portion of the media.

And most surprisingly, no respect from the teams in the league.

He’s not the flashy young QB, nor is he the loud mouth telling the panel to shove it. He’s the guy who comes to work and puts in the time and prep and plays the role that is given to him. If he starts, he starts. If he doesn’t start, he prepares like the guy who is starting so he can go in and help his team win.

He is always a team’s plan B, and he’s a good plan B which is why he’s been in the league 16 years.

The CFL is full of back up QBs, they come and go constantly. In fact, last year Montreal and Saskatchewan had enough QBs go through their rosters they probably could have supplied the whole league in back ups… twice.

Yet Glenn for as many times as he has been written off he still gets signed, he still comes to work prepared to play, at some point he ends up the starter via injury or poor play, and still gets the job done when he gets on the field.

Kevin Glenn will be in the Hall of Fame. Period.

He is a hall of famer, end of story. Will it be first ballot? No, but rare is the first ballot Hall of Famer. Current and former players don’t doubt his hall of fame status, so why should we. His resume and body of work have earned a spot in the hall and when he chooses to retire as an Eskimo, it will only be a matter of time before he gets his proper due.

So really at the end of the day your arguments that Kevin Glenn isn’t a hall of famer are irrelephant.