Trying to make sense of the Carter Chaos

“What the F happened today???”

That what was going through my head after I finished supper with my family and sat down to get caught up on social media.

Depending on where you looked…

-There was a melee at/or after practice involving a couple to a bunch of players.

-Coaches were instigating the fight like a gang of green and white clad Tyler Durdens… (Which made me wonder who was the Riders’ Bob “Bitch Tits” Paulsen in all of this).

Yet, NONE of the local media who was at practice caught wind of this, including our own Alex.

Supposedly, hours after practice Rod Pederson reported on the Sports Cage on his personal twitter about the 3 players being released after hearing from what he deemed a reliable source. This report was picked up Rider message boards and was spread through social media as fact. In all honesty, I have not heard today’s show, and he apparently quietly deleted the tweet so it no longer exists.

Just want to clarify I am not hanging Rod out to dry here. There is a fine line in the media with being first and being right, unfortunately, sometimes being first means you have to eat crow if the facts don’t back what you initially report.

Then later 3 Down Nation’s Justin Dunk, who is more right than wrong most of the time, reported on a fight that happened at practice which was verified by fans at practice between Carter and Sam Williams. 3DN’s Arash Madani also got into the reporting with more salacious “facts” stating that players were told they wouldn’t play for the Riders again and were being sent home.

Plus throw in Duron’s cryptic tweet of “It was fun while it lasted…. Love y’all”

Frankly, it’s been a mess.

Here is what we do know for sure though.

– There was most definitely a scuffle with Carter and Sam Williams at practice.

– None of the players have been released. Honestly, I have no idea why anyone would think they would get released at this late in the season unless it was something that had legal ramifications. Especially 3 key pieces of your starting offence.

– Jovon Johnson came out strong against the allegations being reported and calling them all false and followed it up with another couple of tweets saying Williams instigated the scuffle. 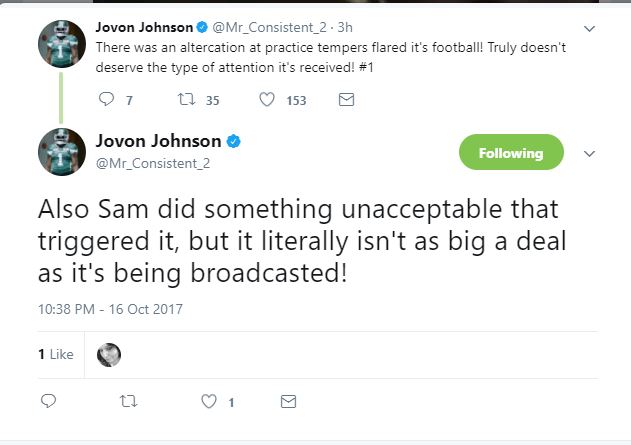 – Carter is still in Regina. He tweeted out a picture showing the receivers were out bowling Monday night.

-Jones will be talking to the media tomorrow about the events that happened today and it will all be clearer… or not clearer depending on who you want to believe.

It’s never a boring day in Rider Nation, just wish it was ramping up for playoffs not dealing with what is looking like over-hyped drama.

And oh ya they play the best team in the league this weekend….

Tune into this week’s show for more on this and plenty more.