What a week in the CFL!

First, the Saskatchewan Roughriders re-signed GM, Head Coach, DC, VP of Football Ops, King of the mountain, Ruler of Rider Nation (among all the other titles he has), Chris Jones to a contract extension, keeping him in Saskatchewan through the 2019 season. Immediate reaction was elation. We’ve seen him strip this team bare and rebuild it in his vision and within 2 years had us from a joke of a team to within 23 seconds and a yard of the Grey Cup. Stability is huge and this move really was a no-brainer for Craig Reynolds.

Then more reaction came in. A brutal article was written by an over the top homer Calgary Stampeder fan (no, I won’t link that joke of a take) saying that it was too soon for a Jones extension. Ummmm, nope, you’re wrong dude. Keeping an integral part of your team before going into a contract season is rarely a bad idea. It could have saved the team a ton of money and from talking to players, they LOVE Chris Jones. They love playing for him and they love the family atmosphere that he has built here in Saskatchewan. Fans have FINALLY warmed to Jones, so this move makes complete sense and was a great early Christmas gift for Rider Nation.

The Riders also lost a coach this past week. QB Coach Jarious Jackson was plucked by the BC Lions to be their Offensive Coordinator and QB Coach. Can’t fault Jackson for getting a promotion and going back to where his CFL career began. Best of luck Coach Jackson, just not when you play the Riders… or anyone from the East.

We got a tip late Wednesday night that on Thursday the CFL schedule was going to be released, and thanks to the Edmonton Eskimos not knowing the difference between noon and midnight, they released the Esks schedule prematurely to their season ticket holders. Later in the day we got the full CFL Schedule. Of course, after the excitement wore off and people actually looked at the schedule, all we heard was the complaints with how the schedule doesn’t fit with each person’s individual schedule. Yes, I’m lucky enough to not have to travel to games, so the schedule doesn’t really impact me at all, but it does suck for the out of towners to have a Thursday night game, a Friday night game and a Sunday evening game on the schedule. But, in the league’s defense, that’s not on their minds. They want to push Thursday Night Football and honestly, they only care about ratings and they could put the Riders on TV at 2am and we’d still watch.

That said, we get to plan our Summer holidays a few months earlier now! Good on you CFL for having that schedule ready and done super early!

The CFL also released the 2018 Draft Order. The Riders have the 5th, 10th, 14th, 36th, 45th and 63rd picks. Only having 6 picks isn’t that great, in fact it’s tied for the least amount in the league, but having 3 in the top 14 is a great thing for a team that needs the Canadian depth help and eventual Canadian starters. I’m not going to pretend like I watch a lot of college ball, especially U-Sports, so I won’t speculate on who the Riders should be looking at drafting, but we could really use help at OL, DL and WR. Hopefully in those top 3 picks we get guys that can come in and compete right away and push for starting jobs.

The team with the #1 pick is a hot mess and it’s not getting any better. What is going on in Montreal? Kavis Reed is killing that team, that’s what’s going on. They still don’t have a Head Coach (although reports say that they want Marcel Bellefeuille to be their new coach, but they can’t reach a contract agreement. Frankly, you couldn’t pay me enough to coach that mess…

Danny Barrett and Kerry Joseph (friend of the show) have also emerged as candidates for the Alouettes Head Coaching vacancy as well. Odd, but Danny Barrett really isn’t a bad option. Realistically, they need to get back to respectability and Barrett did that here in Saskatchewan in the early to mid 2000’s. He won’t win a Grey Cup for Montreal, but he is far from the worst choice.

Als Assistant GM Catherine Raîche stepped away citing ‘personal reasons’. What these are, we don’t know for sure, but it sure appears that NO ONE wants to work with/for Kavis Reed. Yikes.

Speaking of yikes… on Sunday afternoon as Ben Roethlisberger threw a stupid interception at the end of the Steelers/Patriots game, Jerome Messam had quite the tweet: 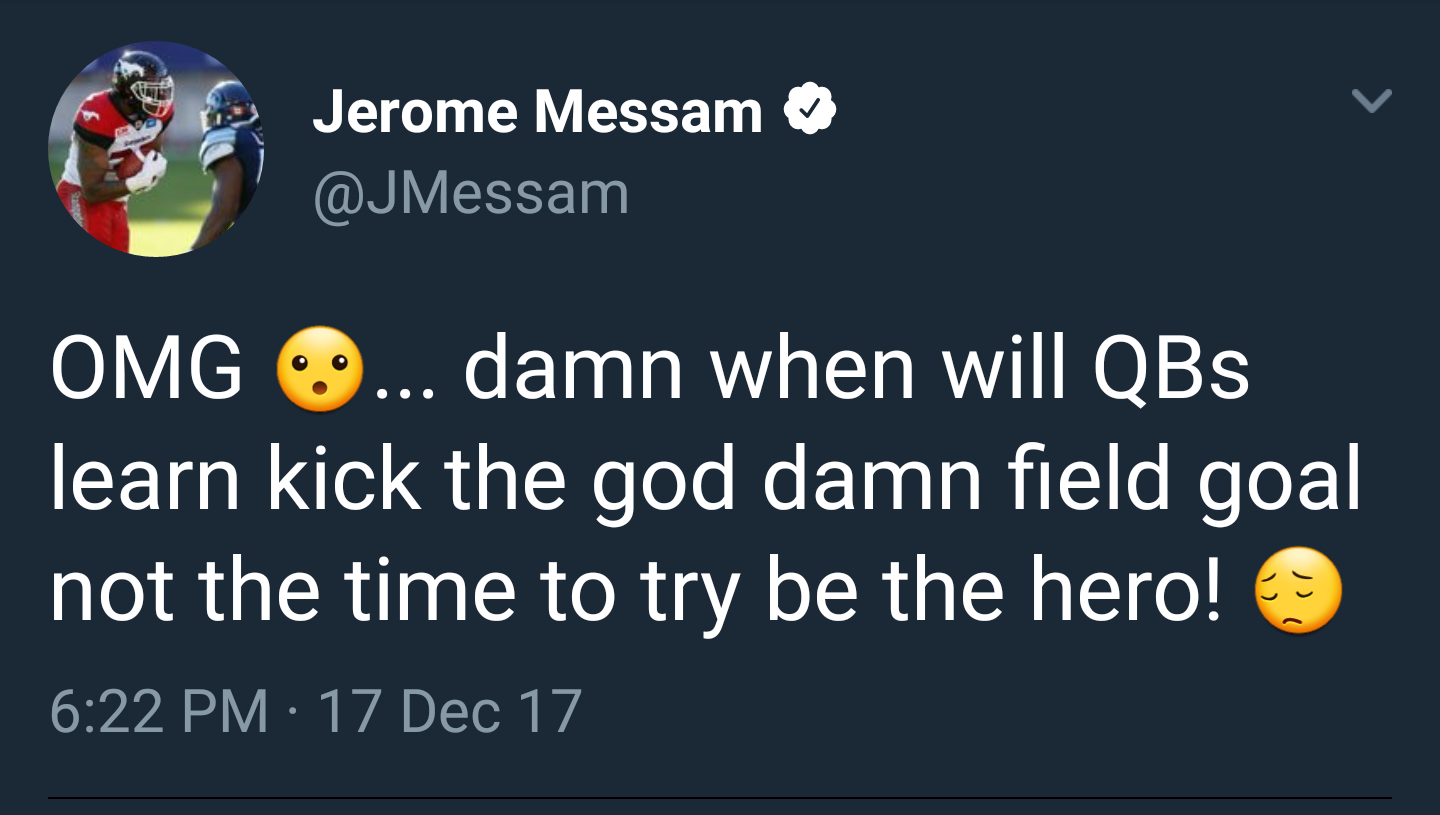 Of course, Twitter went nuts as it appeared Messam threw shade at his own QB Bo Levi Mitchell in the process. Messam, predictably responded: 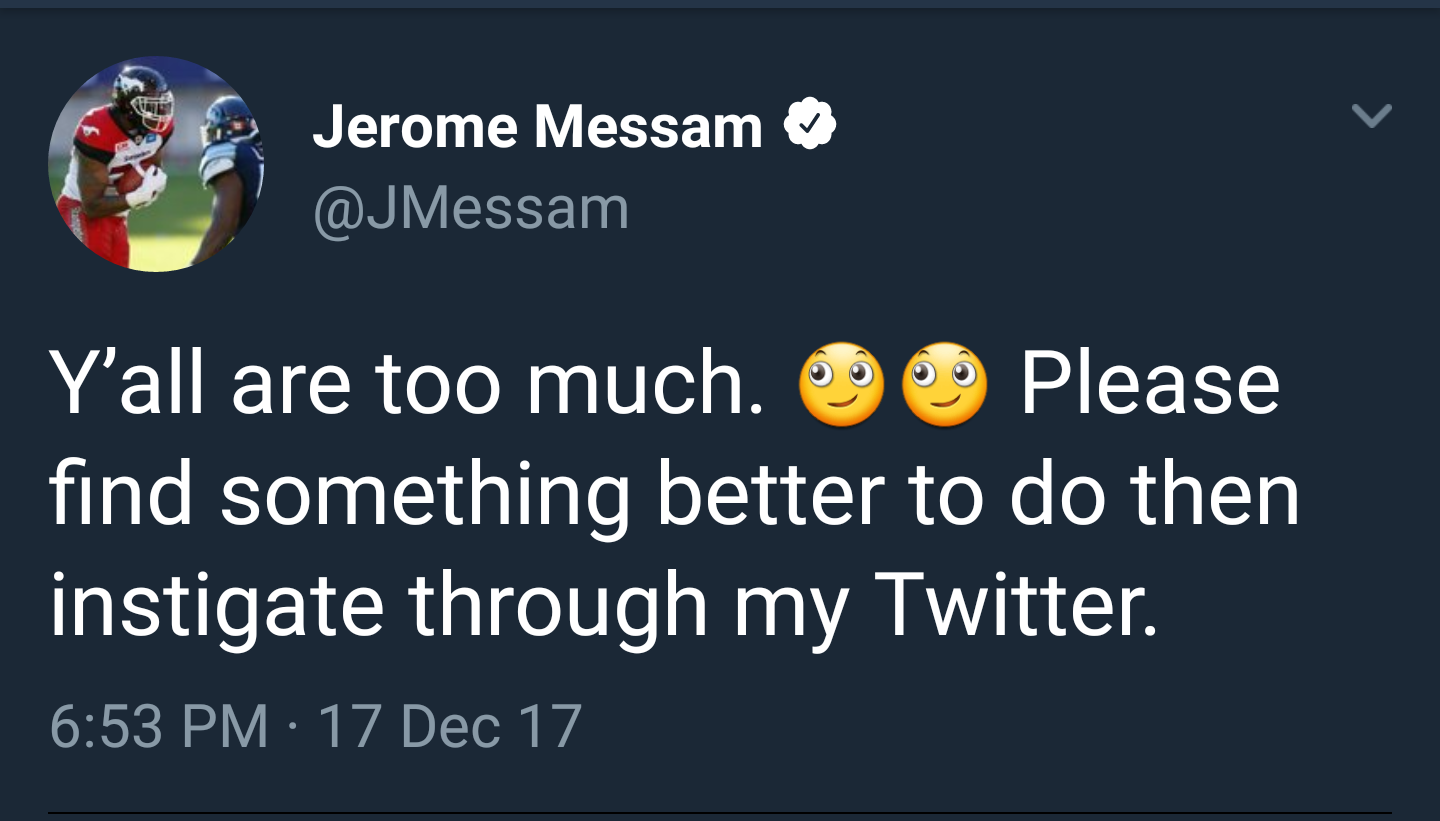 Whether he meant to or not, SHOTS FIRED!

Sticking with the Calgary Stampeders, they re-signed potential Free Agent receiver Lemar Durant a day after he tweeted out “Free Agency” I was disappointed because I quote tweeted that and said that he should sign in Saskatchewan and wear #4. Yeah, I meant it as a bit of a troll, but a ton of fans could save money on getting a new jersey! But alas, both my #4 jerseys stay in the closet.

Finally, best of luck to everyone who made it to their NFL Fantasy Football Championship games this upcoming weekend. Well, no luck to the people who face me. I could really use the cash!

Merry Christmas, Happy Holidays and Happy New Year to all of you in RiderNation and across the CFL family! I hope you have a great holiday season and a great finish to 2017! Bring on 2018!