How great does Riders Head Coach Chris Jones look now after trading QB Darian Durant in the offseason? The Riders sit at 6-5 and have more wins than all of last year with a healthy Darian Durant. I love Durant and I was one of his biggest defenders while he was here in Saskatchewan, but he’s done.

Anyone else think it’s pathetic the Als signed Ken Miller as an offensive consultant? It REEKS of desperation to try and get Durant to not be terrible and trust someone, anyone in that offense. Miller hasn’t been around for 6+ years and Kavis Reed is panicking. Nothing against Miller, but it’s a ridiculous thought that he can resurrect 2009-2010 Darian Durant.

What an ugly performance from Durant on Sunday. It’s not like Ottawa’s defense really pressured him, he was just terrible. He’s lost all his confidence and it looks like the football gods are paying him back for week 1.

Speaking of week 1, how the hell did the Riders lose to this Montreal team?? When we look back at it, that game could have been the one that cost the team home field advantage in the West Semi-Final.

On the topic of losing, the Riders lost a ton of players in Hamilton due to injury. They will need all hands on deck this week taking on the league leading Calgary Stampeders. The Riders won’t beat Calgary without Kevin Glenn, Duron Carter, Otha Foster, Marcus Thigpen, etc.

Jerome Messam, if he plays will have a MONSTER game. The Riders don’t have the DL right now to stop him.

Why wasn’t BC Lions’ Micah Awe kicked out of that Lions – Stamps game? 3 clear cheap head shots. The league cares about player safety my @$$. Get rid of padded practices, but not players/hits like this? As Linday Ruff said, that’s the definition of a joke.

The Ottawa REDBLACKS are lucky that Hamilton and Montreal are terrible because they won’t go anywhere with Ryan Lindley. My goodness the East Division is brutal. Can we just have a best 2 of 3 playoffs with West teams to determine the Grey Cup and just omit the East Division?

HOW BOUT THEM COWBOYS?? My Denver Broncos showed them what a REAL team looks like.

Kansas City WILL win the AFC and get to the Super Bowl as much as I hate to say it. They are all around the BEST team in the NFL. Anyone who says any division other than the AFC West is the toughest in the NFL is 100% wrong.

What’s wrong is that the NFL is giving Los Angeles 2 teams. The Rams and Chargers combined to have 81, 993 tickets sold in their two games. And there’s no way there was 56,612 were at the Rams game. Maybe the new stadium will change things, but this is embarrassing.

The Atlanta Falcons had their first game in their new stadium, which features concession prices like this. 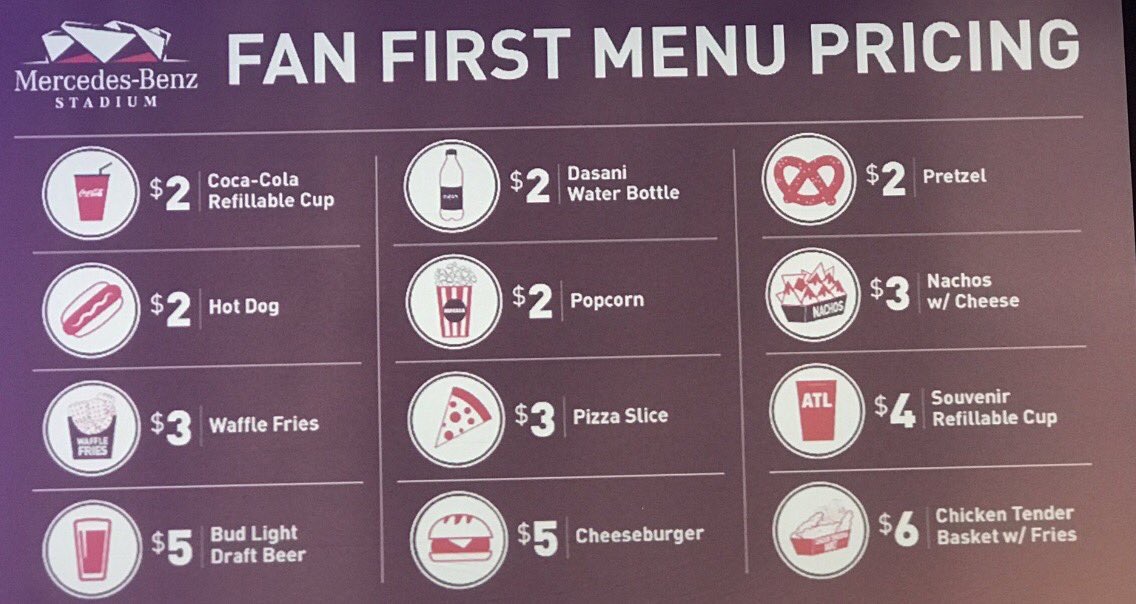 You want me to spend money in your stadium? THIS is how you do it. Sure it’s easier to do with 70,000 people in your stadium, but no reason the Riders and the City of Regina can’t have something similar. I spend $0 in that stadium because the food is average at best and incredibly overpriced (not to mention the popcorn is done a couple hours before kickoff…) I’d easily spend money if a hot dog was $2 and not $7.

I complain about it, but that’s Economics 101 (I got a 72% in that class by the way). I’m only one person and as long as others buy that $22 hot dog, the prices will continue to remain as stupidly high as they are.

Finally, Rider Nation, you got had. On Monday night, Stamps QB Bo Levi Mitchell asked where all the Rider fans were at trolling him since it’s game week. Well, he wanted your tweets for his “Troll Tweets” segment on his radio show in Calgary. And you did not disappoint him. For whatever reason, Rider fans hate this guy because he’s “cocky”. I don’t think he’s cocky so much as he is extremely confident in his ability. And he should be with his career record. All the guy does is win. Cockiness aside, I’d love to have a guy like that on my team. I hate that I like him so much, because he’s on the Stamps, but come on, take off your too green tinted glasses, he’s a great QB and great for the league. Bo, you have a fan in me and I love that you troll the Rider fans because they just can’t ignore you, no matter how much they pretend they don’t care about you. Keep up the fun! Hope you lose Sunday.